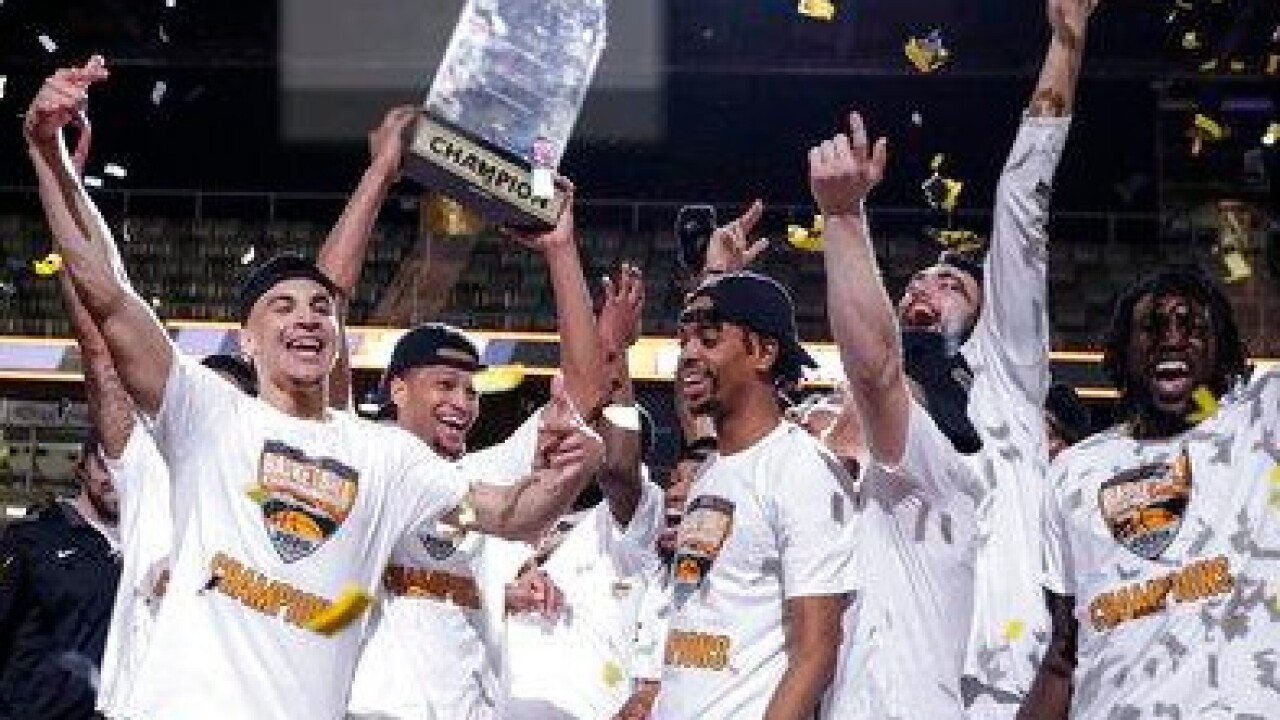 (Copyright 2020 The Associated Press. All rights reserved. This material may not be published, broadcast, rewritten or redistributed.)
AP Photo/Michael Conroy
Northern Kentucky celebrates with the trophy after a 71-62 win over Illinois-Chicago in an NCAA college basketball game for the Horizon League men&#39;s tournament championship in Indianapolis, Tuesday, March 10, 2020. (AP Photo/Michael Conroy) 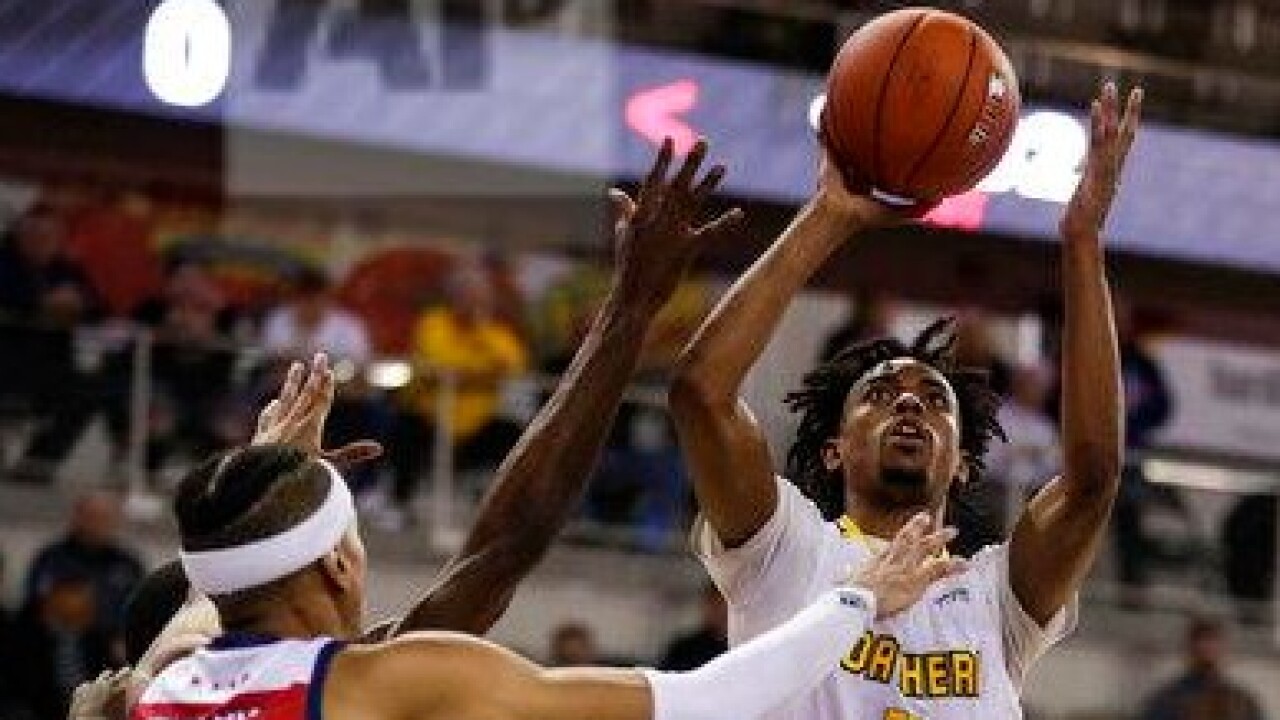 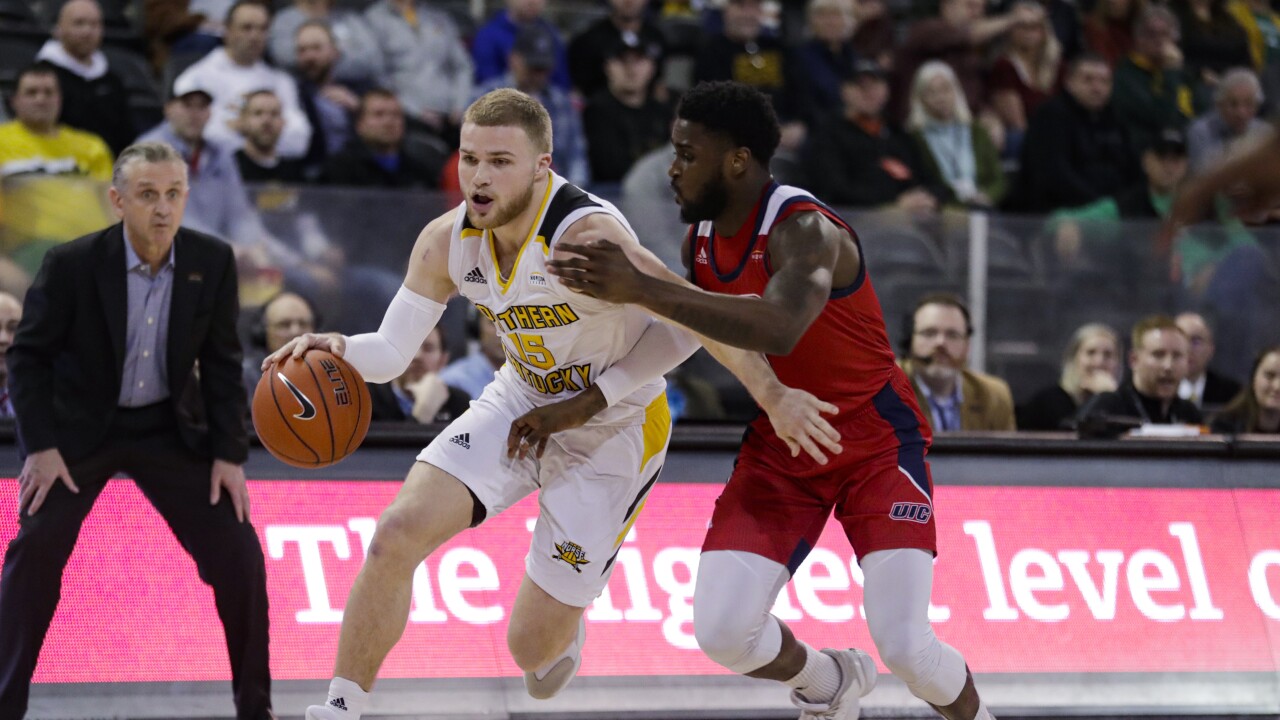 INDIANAPOLIS — Northern Kentucky's Jalen Tate tied one piece of the net to his championship hat Tuesday and hung the rest around his neck after earning another NCAA Tournament bid.

They will be the newest additions to the family’s trophy case — and he hopes not the last.

On Tuesday, Tate scored all of his 14 points in the first half, then spent the second half doing the dirty work on defense while leading NKU past Illinois-Chicago 71-62 for its second straight Horizon League Tournament title.

“It feels good to be back in the Tournament, man, and with these guys it feels great,” he told the crowd moments after being named the tourney MVP. “And we’re not done, either.”

. @NKUNorseMBB is headed back to @marchmadness for the third time in four years! pic.twitter.com/lBuqv3XtKP

Northern Kentucky (23-9) has now made the NCAA's 68-team field for the third time in four years and the first time under rookie coach Darrin Horn. With the conference tournament title in tow, the Norse await the Selection Sunday show March 15 to find out who and where they will play.

“I assume we’ll be a 15 (seed), which means you’ll get a two (seed),” Horn said. “But we’re not going to change anything for who we play. Hopefully, we’ll make them adjust to us.”

For Tate, this victory helps him pull even with his father, Jermaine, and his older brother, Jae’Sean, with two NCAA appearances each. His brother and father both played at Ohio State though his dad eventually transferred to Cincinnati.

Jalen Tate wound up picking the smaller school across the Ohio River, where he has thrived.

In fact, winning the MVP Award and this year’s conference defensive player of the year award might even give the redshirt junior family bragging rights.

“I don’t think I’ll get too far into it, looking back,” he said, referring to the family competition. “But getting beaten up, bloodied, upset when I couldn’t get my shot off at seven or eight or nine, really prepared me for this. I don’t back down from any challenge. It put the toughness in me that I have today.”

He made that perfectly clear in Indianapolis, with his father watching every move.

But when the second-seeded Norse needed a defensive stopper after UIC trimmed a 15-point deficit to 42-38 with 14:03 to play, Tate came through. He played a key role in forcing the Flames (18-17) to miss eight consecutive shots and commit three turnovers over the next seven minutes.

“It was a high level game and it was a night some of our shots didn’t go down,” UIC coach Steve McClain said. “Give NKU credit they played a great game.”

The Norse shot 50% from the field and were 6 of 21 on 3s against the Horizon League’s top defense in both categories.

NKU's Trevon Faulkner added 12 points and Dantez Walton had 10 points and nine rebounds, becoming the 29th member of the school’s 1,000-point club. He now has 1,008 points..

Tarkus Ferguson led UIC with 15 points. The Flames had 18 turnovers and were 3 of 15 on 3-pointers.

Tate also had four rebounds and four assists before fouling out.

Tate and his NKU teammates now have even bigger plans. The Norse have never won a first-round NCAA game, losing to Kentucky in 2017 and Texas Tech in 2019.

“Nobody expects us to get this far and not finish it out,” Tate said.