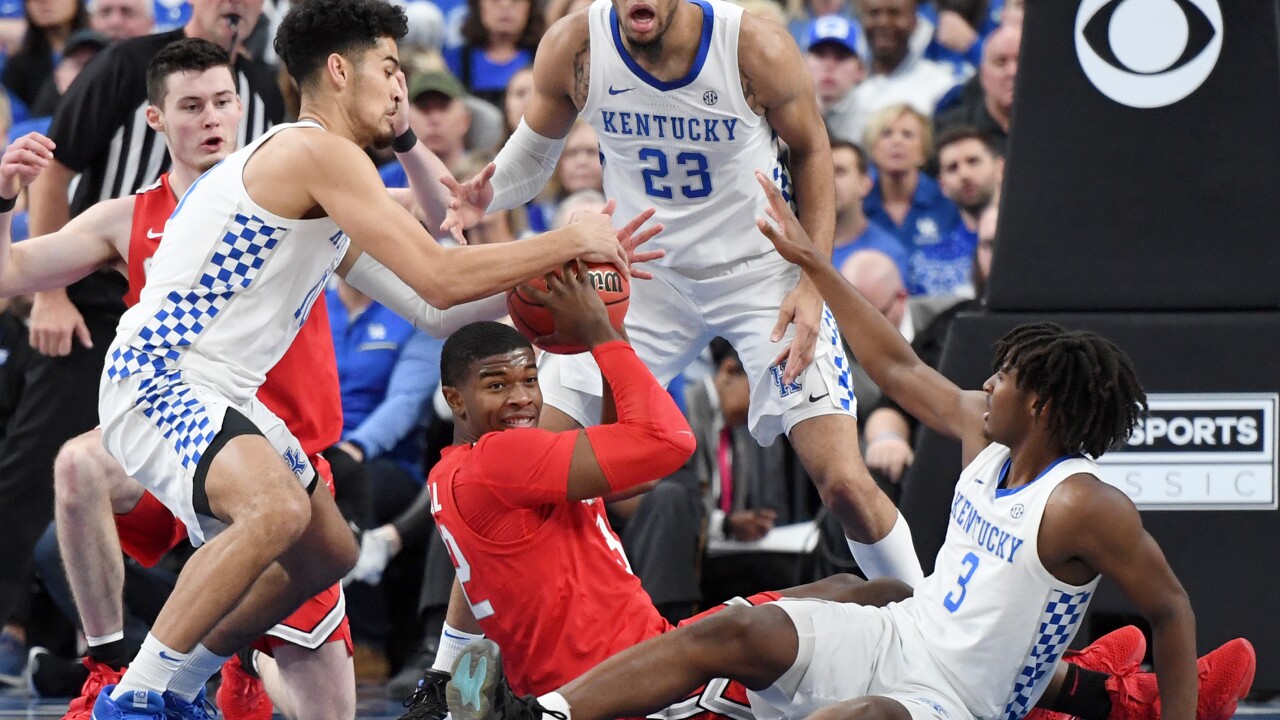 LAS VEGAS (AP) — Ohio State slid in for charges and blocked shots, dove on the floor for loose balls, and jumped into passing lanes for steals.

Doing all the little things was just what the Buckeyes needed in a game that felt like late March, not late December.

D.J. Carton had 13 points, Kaleb Wesson added 12 before fouling out and No. 5 Ohio State outlasted No. 6 Kentucky 71-65 in the CBS Sports Classic on Saturday.

"The counterpunches, teams going back and forth for a 40-minute grind, is what we try to talk about at the beginning of the game," said Wesson, who also had eight rebounds before fouling out with 3:30 left. "I feel like we went out there with that mindset and that mentality and came out with a win."

Ohio State played with second-leading scorer Duane Washington Jr. limited to eight minutes due to a rib injury, so other players had to fill the void. Carton had the ball in his hands most of the second half and delivered, hitting a 3-pointer to put Ohio State up seven with 1:17 left.

CJ Walker hit another 3 to keep Kentucky at bay and the Buckeyes hit four straight free throws in the final 18 seconds to knock off a top-10 team for the third time this season.

"I think we played fearless in those games. I think that's important for your guys to play loose and fearless, understand it's not going to be perfect," Buckeyes coach Chris Holtmann said. "You've got to have players that are gutsy enough to do that. I thought we responded to the emotion of the game."

Kentucky did not shoot particularly well and had no one outside of Nate Sestina who could consistently hit an outside shot.

Just as they did in a loss to Utah Wednesday in Las Vegas, the Wildcats found a way to keep the game within reach.

But, just like the Utah game, Kentucky could not finish it off, leading to an 0-for-2 trip out West.

"We put ourselves in a position to win the game, but we just didn't pass the ball," Kentucky coach John Calipari said. "We're opening up the court to drive people because everybody will collapse and when they did collapse, we shot it anyway. We're still learning."

Ohio State moved to No. 3 after winning its first nine games and was poised to move to No. 1 before losing at Minnesota.

Kentucky opened the season at No. 2, moved to No. 1 after beating Michigan State and fell from the top spot with a surprising home loss to Evansville. The Wildcats already played one game at T-Mobile Arena this week, losing 69-66 to Utah after rallying from a 17-point deficit.

Kentucky has struggled at times with its shooting and had a hard time finding the perimeter mark in the first half — except for Sestina. The graduate transfer from Bucknell matched his season total by going 3-for-6 from 3 while his teammates went a combined 0-for-7.

Sestina hit a couple of early 3s in the second half, but the rest of the Wildcats continued to clank, going four minutes without a field goal.

Kentucky still found a way to keep it close, rallying from seven down to pull within 55-54 with 6 1/2 minutes left.

The Wildcats had their chances down the stretch, but repeatedly drove into the lane for contested shots. spoiling any chance of pulling out a Las Vegas split.

Ohio State has bounced back from its lone loss of the season with a blowout over Southeast Missouri and a neutral-site win over a college basketball blue blood.

Kentucky went 0 for 2 in loss Vegas and clearly has a few issues to work out with the SEC season about to start.

Sestina was tentative in his first game from a broken left wrist, missing the one shot he took in 10 minutes against Utah. He was far more aggressive against Ohio State, finishing 6 of 11 from the floor and 5 of 8 from the 3-point arc.

"Coming back my first game from injury, I was kind of tentative, didn't want to put my hand out there in passing lanes and getting rebounds," Sestina said. "I talked with our coaching staff and they said, you just have to forget about it and play. That's what I tried to do today."