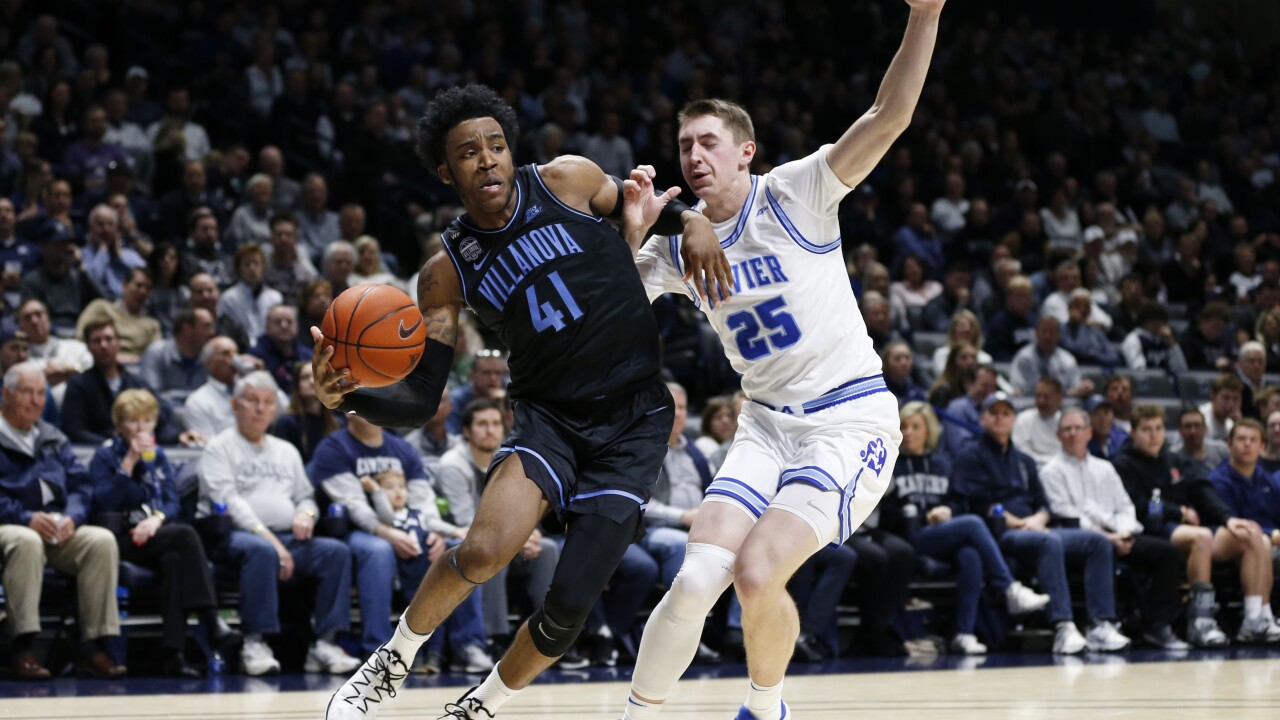 CINCINNATI (AP) — The 3-point shot dried up, forcing No. 12 Villanova to find a different way to keep its late-February surge going. The Wildcats turned to defense to pull out another one on the road.

Saddiq Bey scored 22 points and the Wildcats showed their versatility while beating Xavier 64-55 Saturday for their fourth straight win.

The Wildcats (21-6, 10-4 Big East) recovered from a three-game losing streak by hitting a lot of outside shots that ignited a winning streak that includes victories at Temple, DePaul and Xavier.

This time, their defense carried them through. The Musketeers (17-10, 6-8) were held to a season low in points while getting swept by Villanova in their season series.

“I thought our defense was really good, maybe our best defensive effort of the year,” coach Jay Wright said.

The Wildcats clamped down on Tyrique Jones, who has been Xavier's leader the last few weeks. Jones failed to score in the first half, missing all of his five shots, before finishing with 17 points and 14 rebounds for his ninth straight double-double, one shy of the school record.

“That's the most physical team we've played all year, by far, and it's not even close,” Xavier coach Travis Steele said.

Jones' big second half wasn't nearly enough. Xavier shot 35.7% from the field and wound up with its lowest point total since a 76-54 loss at Creighton on Feb. 3 last year.

“They're such a good team and the margin for error is so small,” said Naji Marshall, who added 15 points.

Bey was coming off a 22-point performance in a 91-71 win at DePaul on Wednesday. Jermaine Samuels added 17 points for the Wildcats, who never trailed.

Villanova made 18 3s — one shy of the school record — at DePaul on Wednesday, extending a trend of hot outside shooting during the Wildcats' resurgence. They missed their first four shots from beyond the arc against Xavier, which has the league's top 3-point defense.

Bey finally hit a pair of 3s as Villanova pulled ahead 23-12, with Xavier missing 15 of its first 20 shots overall. Marshall made a 3 as Xavier cut the lead to four points, but Xavier failed to score over the final 4:18 of the half, which ended with Villanova ahead 30-21.

“That's what it takes on the road,” Wright said. “If a team like that gets going, you're going to be in trouble.”

Villanova: Improved 3-point shooting has been a key ingredient in the Wildcats' latest winning streak. They'd made at least nine 3s in each of the previous five games. Against Xavier, the outside shots didn't fall as easily — they went only 7 of 29 — but the Wildcats' defense made the difference.

Xavier: The Musketeers lost six of their first eight Big East games but had won four of their last five led by Jones and Marshall, who gave them an inside-out scoring threat. Jones was negated by Villanova's interior defense in the first half, and Marshall didn't make much of an impact while finishing with 15 points.

Villanova ends a three-game road swing by hosting St. John's on Wednesday. The Wildcats won at St. John's 79-59 on Jan. 28.

Xavier hosts DePaul on Tuesday. The Musketeers won at DePaul 67-59 on Feb. 4.