Three others also on leave in investigation 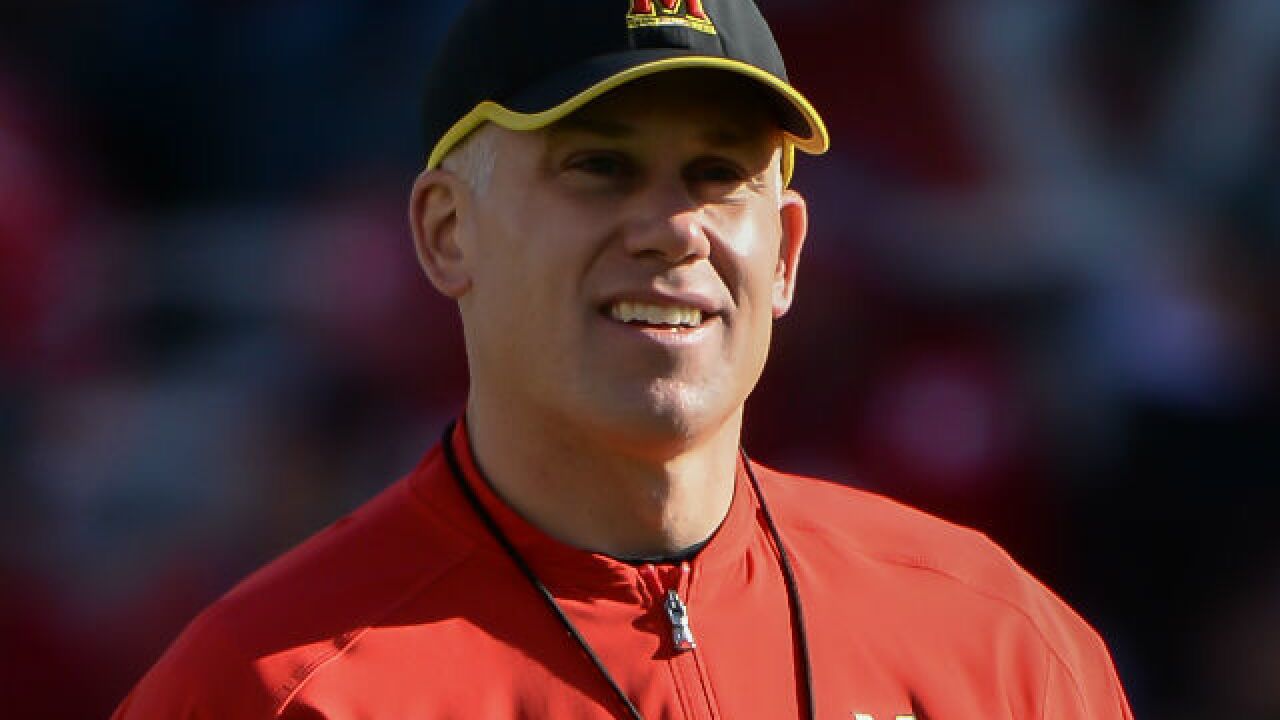 Image copyright 2018 Getty Images. All rights reserved. This material may not be published, broadcast, rewritten, or redistributed.
<p>LINCOLN, NE - NOVEMBER 19: Head coach DJ Durkin of the Maryland Terrapins watches action before the game against the Nebraska Cornhuskers at Memorial Stadium on November 19, 2016 in Lincoln, Nebraska. (Photo by Steven Branscombe/Getty Images)</p>

In an open letter, athletic director Damon Evans wrote: "At this time, the best decision for our football program is to place Maryland head football coach DJ Durkin on leave so we can properly review the culture of the program."

Earlier Saturday, the head of the football team's strength and conditioning staff was placed on paid leave while the school investigates claims he verbally abused and humiliated players, according to a person briefed on the situation. The person spoke to The Associated Press on condition of anonymity because Maryland had not announced the decision regarding Rick Court.

Maryland has also placed two athletic training staffers it did not identify on leave as it investigates the death of Jordan McNair. The 19-year-old offensive lineman was hospitalized May 29 after a team workout and died June 13.

Dr. Rod Walters, a former college athletic trainer, has been hired by Maryland to investigate the circumstances of the death. A report is expected by Sept. 15. McNair's parents are being represented by Baltimore attorney Bill Murphy, whose firm is also investigating.

In his open letter, Evans wrote: "The external review into the tragic death of Jordan McNair continues, and we have committed to releasing publicly the report being prepared by an independent and national expert."

An ESPN story on Friday quoted unidentified players, former players and former members of Durkin's staff, who contended Court and Durkin created a toxic culture within the program.

"The safety and well-being of our student-athletes is our highest priority," Evans wrote. "These alleged behaviors are not consistent with the values I expect all of our staff to adhere to and we must do better."

Durkin is starting his third season at Maryland. The 40-year-old former Michigan defensive coordinator is 11-15 in two seasons after receiving a five-year, contract worth $12.5 million in December 2015.

Keisha Staples, the mother of junior defensive back Antoine Brooks Jr., told the AP she is close with a group of about eight players' parents who would like to meet with Evans and school officials to voice their "full support" for Durkin.

Brooks was part of Durkin's first recruiting class in 2016.

Staples said her son has never told her of inappropriate behavior by Durkin or Court, and that Durkin has been open and accessible when any issues have come up with Brooks.

"I'm sure not everybody has had the same experience we've had, but we have had a good experience," Staples said.

Staples said she has never had any interactions with Court.

"I don't want the stigma to be at Maryland this is a toxic culture," Staples said. "This is a football culture."

She added: "They're already dealing with the death of their teammate. Now they have to deal with the loss of their coach."

Durkin brought Court to Maryland to lead the strength and conditioning staff in 2016. Court had been the head strength coach at Mississippi State since 2014 under coach Dan Mullen. Court also worked with Durkin at Bowling Green in 2005 and '06, when Durkin was an assistant.

"He worked us hard," Fitzgerald told the AP. "They were definitely tough workouts, but ultimately he wasn't out to get anybody. He wasn't out to hurt anyone. His job is to make us physically fit and ready for the season and that's exactly what he did. From what I remember, he never really went over the line or did anything crazy like that."