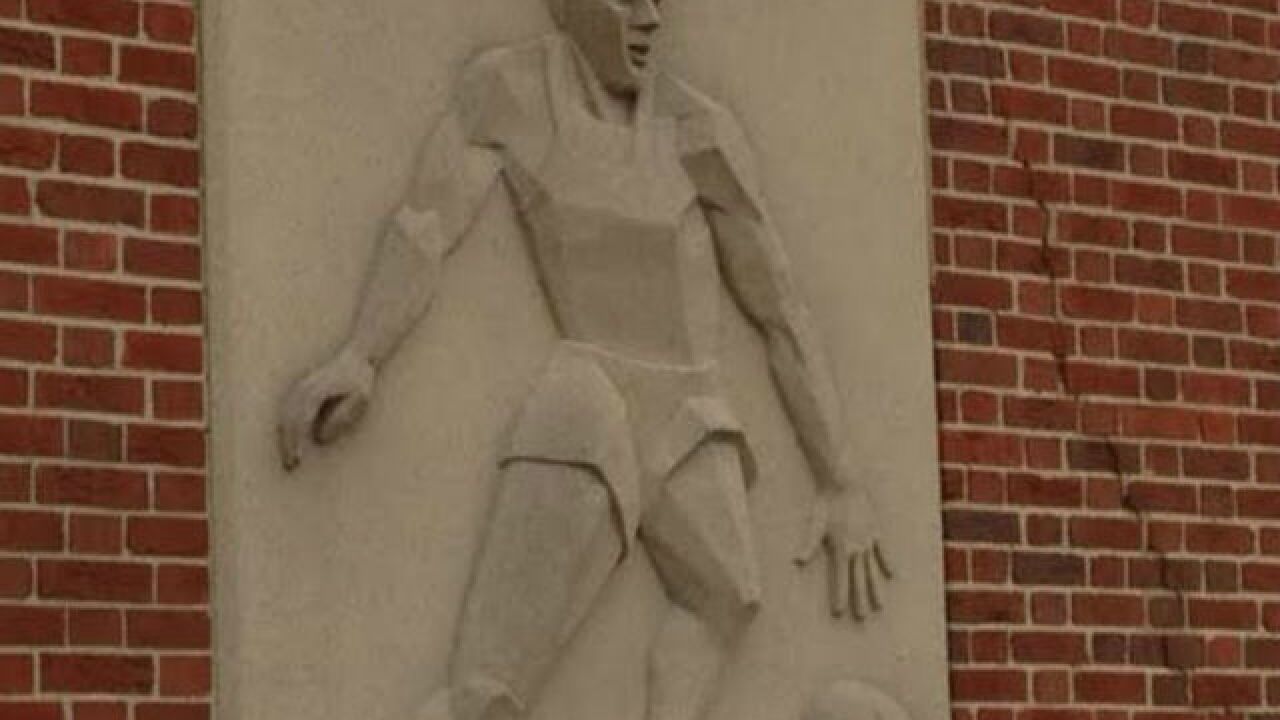 Copyright 2018 Scripps Media, Inc. All rights reserved. This material may not be published, broadcast, rewritten, or redistributed.
<p>The basketball bas-relief sculpture that formerly flanked the side of the Cincinnati Gardens entrance may eventually land at Cintas Center. (Photo by Mike Dyer)</p>

CINCINNATI -- A limestone bas-relief basketball figure that once flanked a side of the Cincinnati Gardens main entrance may eventually find a home at Cintas Center.

The basketball figure is one of six sculptures recently removed by the O’Rourke Wrecking Company as part of the remediation and demolition activities on the Gardens, located at 2250 Seymour Ave. in Bond Hill.

The agency plans to repurpose the 19.5 acres into in an area for advanced manufacturing.

The sculptures, which are five feet wide and six feet, eight inches tall, were designed by the late Henry Mott. The figures flanked each side of the main entrance since the arena was built in 1949. There are two figures each of a boxer, basketball player and hockey player.

John Peckskamp, the grandson of Mott, told WCPO he plans to work with Xavier University regarding a donation of the basketball figure in the hopes it would eventually be displayed at Cintas Center.

The Xavier University men's basketball program used the Gardens as its home court starting with the 1983-84 season. The final Xavier game at the Gardens was a National Invitation Tournament first-round game against Marquette on March 15, 2000. Cintas Center officially opened in June 2000.

Peckskamp recently donated one of the boxing figures to Buddy LaRosa. The boxing figure is in storage until LaRosa determines how best to display it at the Cincinnati Golden Gloves boxing academy in Over-the-Rhine.

Peckskamp said his plan is to have a set of three (a boxer, basketball player and hockey player) displayed at Lunken Airport. He’s still considering his options as to where the remaining hockey figure would reside.

Peckskamp, who lives in Loveland, has set up a Go Fund Me account to raise funds for such a structure to support and display the sculptures at Lunken Airport.

Mott used to enjoy watching the planes from the airfield and Peckskamp’s parents live nearby in a residence overlooking the airport.

“I want to put them somewhere where they will be displayed and not just stored,” Peckskamp said.

The sculptures were the result of a design competition held in 1948 by the Art Academy of Cincinnati and the Cincinnati Gardens’ architect/engineering firm A.M. Kinney of Cincinnati.

Mott, who died May 7, 1999, started Mott Studios Downtown before he moved it to Mount Adams and to Walnut Hills. He was a longtime Hyde Park resident.

The Gardens was the seventh-largest arena in the country at the time of its opening Feb. 22, 1949 when the Montreal Canadiens played an exhibition hockey game in front of 11,500 fans.

The signature Cincinnati Gardens letters that once adorned the arena entrance are in storage with the American Sign Museum.

Sign Museum President and Founder Tod Swormstedt said earlier this month the museum received a $15,000 grant to install the letters at its location facing Monmouth Street in Camp Washington possibly in the first quarter this year.