Broo View: FBS teams like the UC Bearcats should limit the number of FCS matchups 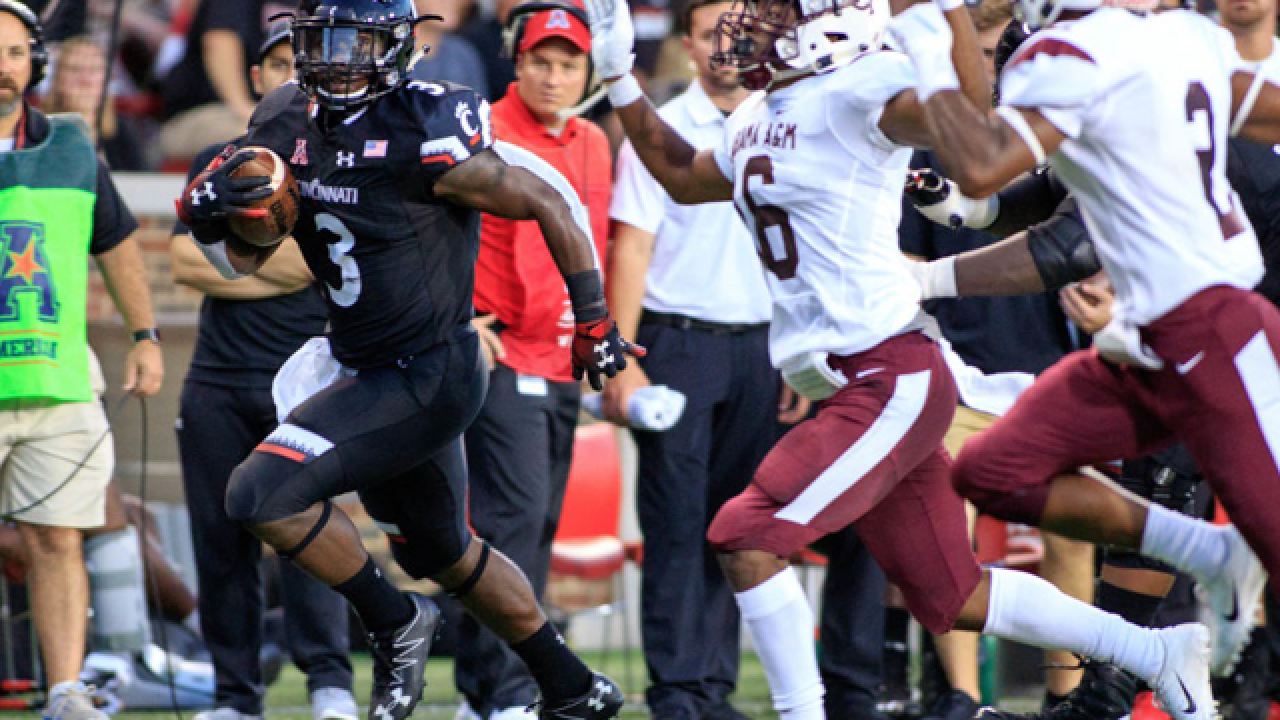 Image copyright 2018 Getty Images. All rights reserved. This material may not be published, broadcast, rewritten, or redistributed.
Justin Casterline | Getty Images
<p>Michael Warren II #3 of the Cincinnati Bearcats runs the ball in the game against the Alabama A&M Bulldogs at Nippert Stadium on Sept. 15, 2018 in Cincinnati, Ohio. </p>

If you want to be the best, you have to beat the best. Remember that one?

So why are all of these major college football teams scheduling anything but the best?

Back in the bad old days, Football Bowl Subdivison, or FBS, as it's now ridiculously called, was Division I football. Political corrective infested sports long ago. So now, if you're the marquis teams in college football, you're not Division I anymore, you're FBS. Well, OK.

FBS and FCS teams operate under different parameters, like scholarships. FBS teams (Alabama, Southern Cal, and the University of Cincinnati, for example) can award up to 85 scholarships to their football players. FCS teams have only 63 to hand out. And those can be split to give more players a piece, although less, of the pie.

FBS schools can qualify for the current four-team championship playoff. But, in reality, only 12-15 ever have a realistic chance of that. The rest of the 129 FBS schools try to have a winning record each season, so they can play in a bowl game that has significance to virtually no one except ESPN, which funds most of the bowl games, so it has "product" to fill its 24 hours of sports a day.

FCS teams can actually qualify for a 24-team championship series. Which is good, because, like the NFL, you actually have a legitimate champion every season. But other than the aforementioned "friends and loved ones," who really cares?

How much time do you think is spent in bars around here debating the strategies and outcomes of an FCS championship game between, oh, say, James Madison and North Dakota State? Quick, no cheating, name the winner and the score and who was the MVP. The answers will follow.

This season, there will be 111 FBS vs. FCS matchups.

Do college football fans really need this? And who exactly gains anything from all of this?

Some of the answers are obvious. Like UC's game last Saturday night, when it annihilated Alabama A&M 62-7 at Nippert Stadium, the matchups give FBS teams the opportunity to empty its bench and give players who wouldn't see the light of day at places like South Florida a chance to take the field. The visiting team, as a consolation for getting its brains beaten in and then enduring an 11-hour bus ride back home, gets a healthy "guarantee," which helps pay for the sports that don't generate any revenue, which would be every other sport not named basketball. The FBS team, which overwhelmingly has won these matchups, gets a win over a "cupcake," which it can use to pad its overall record and use it to become bowl eligible.

That's about it. Everybody wins, except for the fans. Honestly, UC fans, did you gain any knowledge about your team, or even feel better about it, after watching it rip apart another team with no business being on the same field with it? It was 42-0 at the half. And UC out-gained Alabama A&M 747-182.

This wasn't a football game. It was a semi vs. compact car wreck.

UC isn't to blame. Every school does this. The NCAA encourages it. And in fairness to UC, it does schedule a lot of second-tier FBS schools. The Bearcats play Miami University every year and Ohio University is coming to town this weekend.

But that only makes my point. If two of the teams on your schedule are teams you should beat (and I know the Miami game, played at Paul Brown Stadium, was a "home" game for the Redhawks, which is irrelevant since you play that team every year), why do you add a third game, now comprising one quarter of your schedule, against teams that will have little help building your case for a major? And I'm not talking about nondescript-variety bowl games. I'm talking about New Year's Six games, which every fan of any FBS school should demand from their athletic departments.

And with the chasm growing yearly between Power 5 and non-Power 5 conferences, for both TV money and fan interest, is it really in the best interest of a conference like the AAC to schedule this kind of game?

Of course, there are upsets. Occasionally, an FCS school upsets an FBS school. It's happened several times this year: Villanova over Temple, North Texas State over Arkansas, UC Davis over San Diego State. The classic is Appalachian State over Michigan. But that was 11 years ago! And late-season, back-to-back losses to Ohio State and Wisconsin were far more devastating to Michigan that year than what happened against Appalachian State.

But go find any FCS upset that truly changed the picture of the national football landscape. James Madison beat Virginia Tech eight years ago. Tech finished that year 11-3. It might've cost Tech a spot in a bigger bowl game. Tech went on to play in the Sun Bowl and got blown out by UCLA.

My point is, if you're a season-ticket holder at a FBS school, what would you rather see: your team beating up some out-manned team in a glorified scrimmage or a game against someone your own size? Is the cost of your season ticket worth the former? If so, you bought it. So I guess you're OK with it.

But here's my idea. Limit FBS schools to one of these FCS matchups once every three seasons. Or, don't allow a win over an FCS opponent to count toward your bowl-eligible record. It may encourage better scheduling.

UC is getting it, though. Through 2022, there isn't an FCS school to be found. UCLA at Nippert, Ohio State in Columbus, road games at Nebraska and Indiana populate their schedules.

Good for them. It's the right way to play it.

Maybe other schools should take notice and stop the embarrassment, for all involved.

Now then, to some things that have been popping around my head like a kernel of corn ...

This performance was just days before his death and two months before the release of the album it appeared on. Written by two mega-talents, Charles Fox and Norman Gimbel, "I Got A Name" reached No. 10 on the Billboard charts, the single released the day after Croce's death.

Jim Croce was a Philly boy. He tried to make it in the music business out in LA, failed and returned to Philadelphia to work odd jobs. He was actually working on a construction crew three years before hitting it big in the record business.

He had just finished a show at N.E. Louisiana State and heading to another show in Texas when his private plane, with five others aboard, crashed -- 45 years ago today.