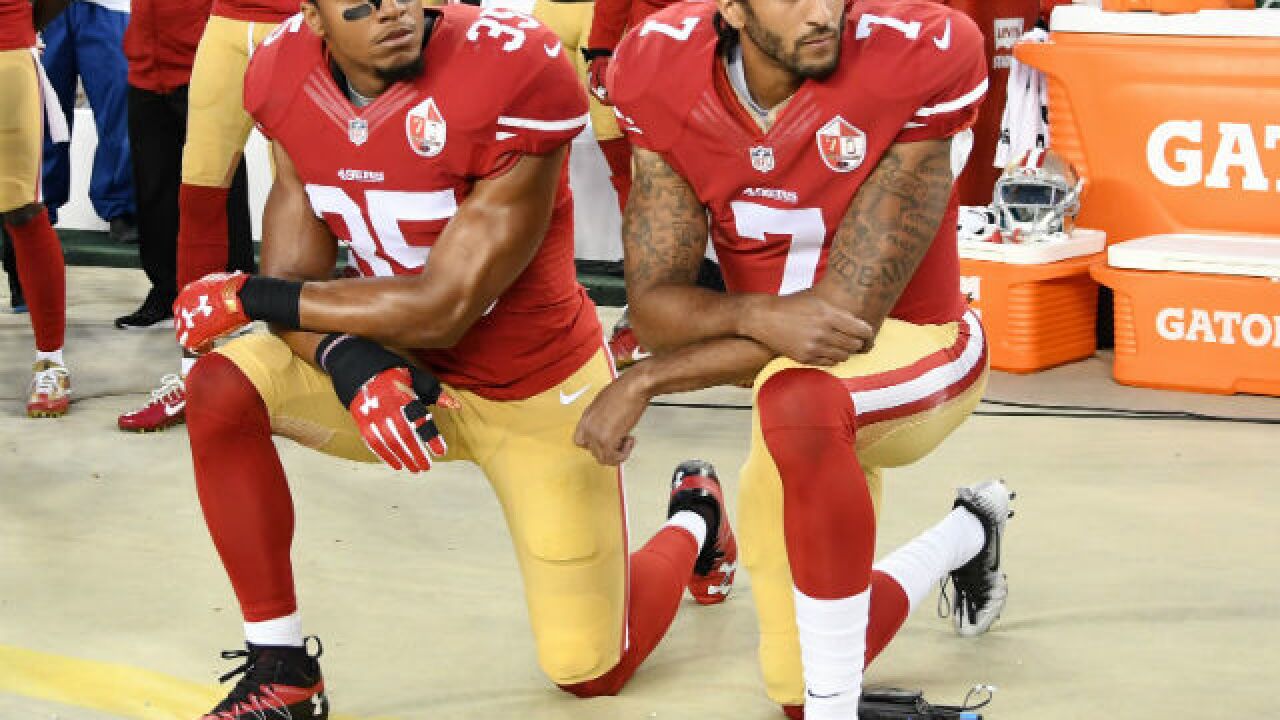 Image copyright 2017 Getty Images. All rights reserved. This material may not be published, broadcast, rewritten, or redistributed.
<p>SANTA CLARA, CA - SEPTEMBER 12: Eric Reid #35 and Colin Kaepernick #7 of the San Francisco 49ers kneel in protest during the national anthem prior to playing the Los Angeles Rams in their NFL game at Levi's Stadium on September 12, 2016 in Santa Clara, California. (Photo by Thearon W. Henderson/Getty Images)</p>

Was it a knee-jerk reaction to taking a knee? Or do the Bengals have a team policy banning in-game protests?

According to profootballtalk.com, the Bengals may have revealed a lot this week about what we've suspected. They had free-agent safety Eric Reid in for a visit. The Bengals are shopping for an upgrade at that position, either through free agency or the NFL draft. Reid is a very good player - 10 interceptions in his five NFL seasons, 264 tackles in 69 NFL games.  At 6-feet, 1-inch and 215 pounds, Reid packs a punch.

He also kneels during the National Anthem.

In 2016, he and Colin Kaepernick were the first players to do so. Reid explained the decision they made in a New York Times article last fall:

"In early 2016, I began paying attention to reports about the incredible number of unarmed black people being killed by the police. The posts on social media deeply disturbed me, but one in particular brought me to tears: the killing of Alton Sterling in my hometown Baton Rouge, La. This could have happened to any of my family members who still live in the area. I felt furious, hurt and hopeless. I wanted to do something, but didn’t know what or how to do it. All I knew for sure is that I wanted it to be as respectful as possible ... After hours of careful consideration, and even a visit from Nate Boyer, a retired Green Beret and former N.F.L. player, we came to the conclusion that we should kneel , rather than sit, the next day during the anthem as a peaceful protest. We chose to kneel because it’s a respectful gesture. I remember thinking our posture was like a flag flown at half-mast to mark a tragedy."

Reid went onto say that he was 'baffled' by the reaction from some NFL fans.

The debate on whether or not police overreact in their day-to-day business is a healthy one.  It should be dialogue, and when needed, open to change in all communities. I would think most rational thinking people would agree with that.  But where the split has occurred on the subject of NFL players kneeling during the National Anthem has never been with message, but with timing.

Whatever message the players protesting were trying to convey was lost, on a lot of NFL fans, in the time they chose to deliver the message. A poll last fall (and if recent elections have taught us anything, be careful reading too much into polling) showed a majority of Americans disapproved of the way some NFL players were expressing their protest.  Kneeling during the Anthem was so polarizing that the four major networks who televise NFL games chose to stop showing Anthem protests.  A common complaint heard on social media and radio talk shows was more about infringement on time, rather than disdain.

"I just want to watch football" was heard a lot. Maybe you said it, too.

Which brings us back to the Bengals. No one took a knee on that team before any game last season. Two seasons ago, when the Kaepernick-Reid protest first gained national attention, coach Marvin Lewis took his team to the 911 Memorial the day before the Bengals opened the season against the Jets. Only when President Donald Trump, at a rally in Alabama last fall, made these comments  did the Bengals and their coaching staff offer a mild protest.  They simply locked arms during the National Anthem.  Hardly earth-shattering stuff.

So this week, when Reid made his way to the Bengals for a free-agent interview, it wasn't a complete shock that Mike Brown questioned, apparently at length, whether or not Reid planned on kneeling during the National Anthem in any future games. That's what Pro Football Talk reported, citing an anonymous source. The fact that it made its way to a web site was a bit surprising (and not hard to figure out which side made it public.)

If Reid thought he had any chance of playing for the Bengals, he can probably erase those thoughts now.  What was bizarre was what happened after Brown's questioning, according to PFT.  Reid then proceeded to take a physical and look at Bengals game tapes with assistant coaches.  Even more logic-defying is why the whole issue of kneeling wasn't brought up before Reid's visit. Nobody wants to get blindsided by anything, let along in a job interview.  And apparently, that's what happened this week.

Reid's answers to Brown's questions about kneeling were reportedly so weak that Lewis gave Reid one more chance to clarify his answers.  Reid left town with no offer.

Will all of this mean Reid never plays for the Bengals? Maybe, maybe not. The Bengals love bargains, and if a bargain comes with baggage and the Bengals think he can help them win (see T.O., Sam Adams, Cedric Benson), compromises will abound.  And it's not that Reid is a player in high demand.  It's the middle of April, five weeks down the road in the free-agent game, and Reid remains unsigned.

No one should be surprised by any of this. Mike Brown was "old school" on his first day of school. He likes hearing the other side of arguments, other points of view. Maybe Reid's visit had a lot to do with that.  Maybe he eventually gets an offer to play in Cincinnati.  For the moment, the baggage that Eric Reid carries is apparently too heavy a lift for the Bengals.

Now then, some random thoughts....

Firing Bryan Price isn't going to fix the Reds problems. Nor will hiring Barry Larkin or anyone else. Sparky Anderson, if he were alive today, couldn't fix this mess. Yes, Price has some strange in-game decisions.  Why he chose not to use Raisel Iglesias in the first game of three in Philadelphia was baffling. Why he chose to roll Tanner Rainey out to the mound in a one-run game Tuesday night when Rainey had barely arrived in Philly to take Yovani Gallardo's spot on the roster is another head scratcher.

(And wasn't signing Gallardo a brilliant move?  Gallardo got $775,000 to pitch in exactly three games.  Well, brilliant for Gallardo, I guess.)

But the roster that was delivered to Price by General Manager Dick Williams at the start of this season was hardly competitive.  Extract Scott Shebler and Eugenio Suarez, who are both hurt and out until further notice, and a team that was supposed to score runs looks more like a team that can't buy a run.

Joey Votto isn't hitting, Billy Hamilton can't hit major league pitching (do they continue to hope he'll suddenly wake up one day and have Ted Williams take over his body?) and Adam Duvall is stirring up the air on a regular basis.

Pitching? Homer Bailey has been steady. Tyler Mahle looks interesting. Anyone else?  And what's happened to Amir Garrett?  They rolled Cody Reed out to the mound before Garrett?  Somebody got a problem with Amir?  And then, of course, there are the infirmed:  Brandon Finnegan and Anthony DeSclafani.  Finnegan hasn't been the same since he fell off a dock last summer, while he was out with another injury. DeSclafani continues to pull muscles on a regular basis.

And Price is supposed to make that work? ...

Lebron James played all 82 games this season .  Think about that. He's 33, draws an inordinate amount of attention on defense and averaged 37 minutes a night.  He won't win the Most Valuable Player Award this season. But he should. Extract James from the Cavs (which is probably just weeks away from happening) and that team struggles to make the playoffs ...

Does MLS have anywhere else to go besides Cincinnati?  Is that why the comedy and political theater continues here? The MLS suits were in Detroit last week, looking at Ford Field as a possible venue for a possible expansion team in that city.  Ford Field, if you didn't know, is a massive NFL stadium, the kind that MLS told Cincinnati it couldn't use for a possible franchise.  Me thinks Cincinnati is the only player in this expansion game right now unless Sacramento finds a billion or two buried in Jerry Brown's mattress ...

Want to wish a Happy 56th Birthday to the front man of one of my favorite 90s groups. Art Alexakis, the heart and soul of Everclear, is celebrating that birthday today ...

This song hit the charts 21 years ago, spawned from the 1997 album "So Much For The Afterglow." Greg Eklund and Craig Montoya were the other two original members of the Everclear lineup. During my days in D.C., I had the pleasure of meeting Alexakis and his band, as I was one of the MC's at an annual Alt-Rock Festival. Good guys who realized that fame and fortune in the music industry is as much blind luck as anything else.

Everclear has done some studio work in the last five years.  Nothing has approached the success of that they did in the mid to late 90s.  And Alexakis continues to evolve.  He was a self described atheist in his 20s.  Now he says he's a Christian.  He's also celebrating 56 years on earth today.