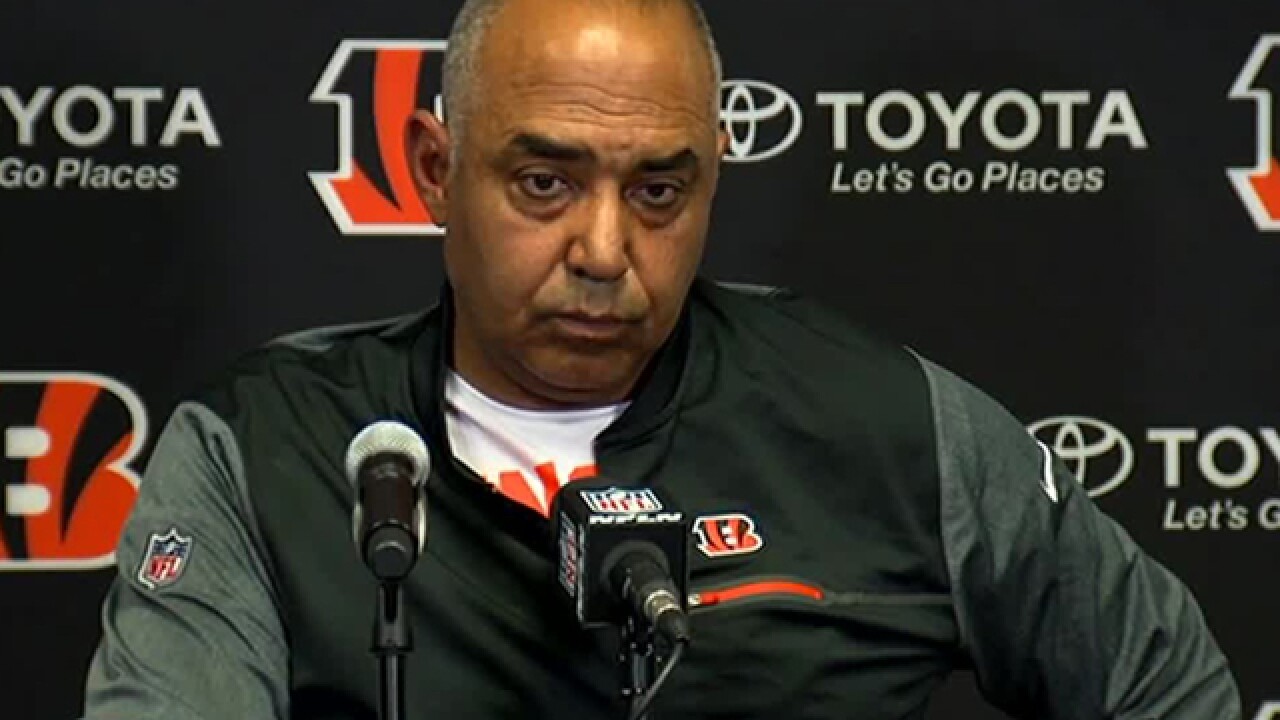 CINCINNATI — If Marvin Lewis leaves the Bengalverse after this season, he could stand to take a few other elements of the existing team with him. It's a pity he probably won't.

The folks at Paul Brown Stadium need more than a new head coach or even a whole new group of managers to plug the holes in their team -- they need to approach the game and the business with a whole new philosophy.

That's a lot harder to find on LinkedIn.

The last time the Bengals got a whiff of a Super Bowl championship, free agency, salary caps and revenue sharing weren't industry practices. Although other NFL teams have learned to live with these new realities and incorporate them into their business, the Bengals, to their detriment, have not. Mike Brown is still attempting to hire the way he would have decades ago.

"Look at what Green Bay is doing, now that Ted Thompson is not the general manager," former player agent Joel Corry recently told me on my radio show on 700 WLW. "They're being more aggressive in free agency. Cincinnati is not going to be a destination market with the way you have that contract structure."

Unlike the majority of teams in the NFL, according to Corry, the Bengals offer little guaranteed money outside of upfront bonus money. That puts an undue amount of stress on getting it right every draft.

Does it really matter who coaches the team if the way the team goes about its business doesn't change? That depends. Do you want to win championships, or do you want to win just enough games to keep a fan base sufficiently interested in your team? There's enough cash in the latter to keep any owner comfortable enough. Stretching for the former might seem like a hassle.

How much cash, exactly? We can't know for certain, but we can make some guesses based on industry figures and the team Corry mentioned: the Green Bay Packers. Because they're publicly owned, the Packers are the only NFL team required to open their books -- and that gives us an excellent window into how such teams make their money.

The Bengals and every other NFL team made $250 million in 2017 just from league money.

The Packers made an additional $199 million in local revenue, presumably from club seats, local TV and radio rights, in stadium signage and luxury box sales. Green Bay is also the smallest market in the NFL, so it's hard to fathom the Bengals made less in local rights than the Packers did.

Given that, let's estimate $450 million in 2018 revenue for each and every NFL team. Not all of that went into every owner's pocket, of course. There is revenue sharing with the players, who are guaranteed 48.5 percent of the total league revenue thanks to a collective bargaining agreement that runs through 2020.

Just for fun and games, however, let's say the Brown family pocketed half of the $450 million. Even after paying for staff, game-day costs and the occasional television spots, that's a hefty sum headed each year to the bank.

If you can make that kind of money not fighting hard, the only reason to step into the ring and try for a large-scale win is the ego of the person in charge. The ego needs to be hungry, or what you and I are left with is what we've gotten over the past 25 seasons: A couple of 12-win seasons here, a couple of 12-loss seasons there and a healthy dose of seasons with anywhere between six and 10 wins.

What, then, becomes the incentive to change a coach? To appease a fan base?

Vinnie Iyer is the chief NFL writer for Sporting News. A couple of weeks ago, he and I were talking about whether or not Marvin Lewis may be heading out the door in a couple of weeks.

"I think the biggest indicator of that is going to sit in the draft, where they go," Iyer told me on 700 WLW. "Some people have them tied to taking a quarterback. I could definitely see that. It would be a signal that everything is going to change there in a big way, soon."

Lewis has been on the job 16 seasons. Only the Patriots' Bill Belichick has been around longer, and Belichick has five Super Bowl trophies. Lewis has Adam Jones and Vontaze Burfict blowing a playoff win with temper tantrums.

Belichick's voice inside of the New England Patriots' locker room never loses its resonance, thanks to all of that hardware. We don't know about Lewis' voice, but we can see the results he produces.

"Messages get stale." Corry told me. "Marvin has taken the team from the medieval period to the present, but he hasn't won a playoff game yet."

If Lewis leaves, who leaves with him? The Bengals' way has been to hang on to assistant coaches the family likes and make the new head coach inherit them, and nothing really changes. Players hang on when maybe it's time to ride into the sunset. The Bengals have a few of those right now, according to NFL player-turned-commentator Ross Tucker.

"I think some of those guys on the D-line are past their primes, heading the second half of their career, not at dominant as they were," he told me. "They have too many first-round picks and high-round picks to be as bad as they were this year. They don't look like a well-coached group out there."

The Bengals have had their yearly dose of injuries, which could explain some of it: Nick Vigil, Darqueze Dennard, a little bit of Joe Mixon, a little bit of Gio Bernard. As we know, however, it didn't stop there. The fact that losing a handful of players could hamstring the team so badly is evidence of deeper fault lines.

"Especially when it's your starting quarterback or A.J. Green," Tucker told me, "you have to find a way to win without them. There are very few players who make a difference between winning or losing ... and A.J. Green is one of them. He's just such a big factor even if it is not catching the ball. Just his sheer presence makes a huge difference for that offense."

Does a new voice fix all of that, heal the sick and breathe life back into the lifeless? It could be a start.

Hanging all that's gone south around the Bengalverse in the last three years on Marvin Lewis isn't fair, but it's a common through line. Mike Brown has resisted the road most traveled all of his franchise-owning life. Without Lewis' consent, it's hard to see him changing paths now. Maybe it's why Hue Jackson is back on the scene. If so, Corry said that wouldn't be a win for the home team.

"It's a win for the opponents in the AFC North," Corry said. "How's Cleveland done since Hue Jackson was fired? I don't want to put all the blame on him, but they've turned it around since he's gone. I don't know if I'd want him to be my guy, to take over for Marvin. Maybe continuity wouldn't be a good thing in that aspect."

As we await Christmas, not a bad time to share with you my favorite secular Christmas song of all time. You might be surprised to learn it's not a Mariah Carey original.

The group is Vince Vance and the Valiants, a novelty group out of New Orleans that, in its time, has gone through about 75 cast members.

The lead voice on this song belongs to Lisa Layne. She told me recently that the song was written by the group's guitar player at the time, Troy Powers. The Valiants had a day off, in Effingham, Illinois, and the three other women who sang in the group decided to spend it shopping.

Layne stayed behind and, along with Powers, went to a local studio to record the song. No one in the rest of the group thought it was anything special, she told me.

Once they incorporated it into their act, the reaction was astounding. Soon, with full band, it was recorded again and released to radio stations for airplay in 1993. It remains to this day, the most played country music Christmas song. Lisa Layne can thank a day away from the shopping mall for her signature song.