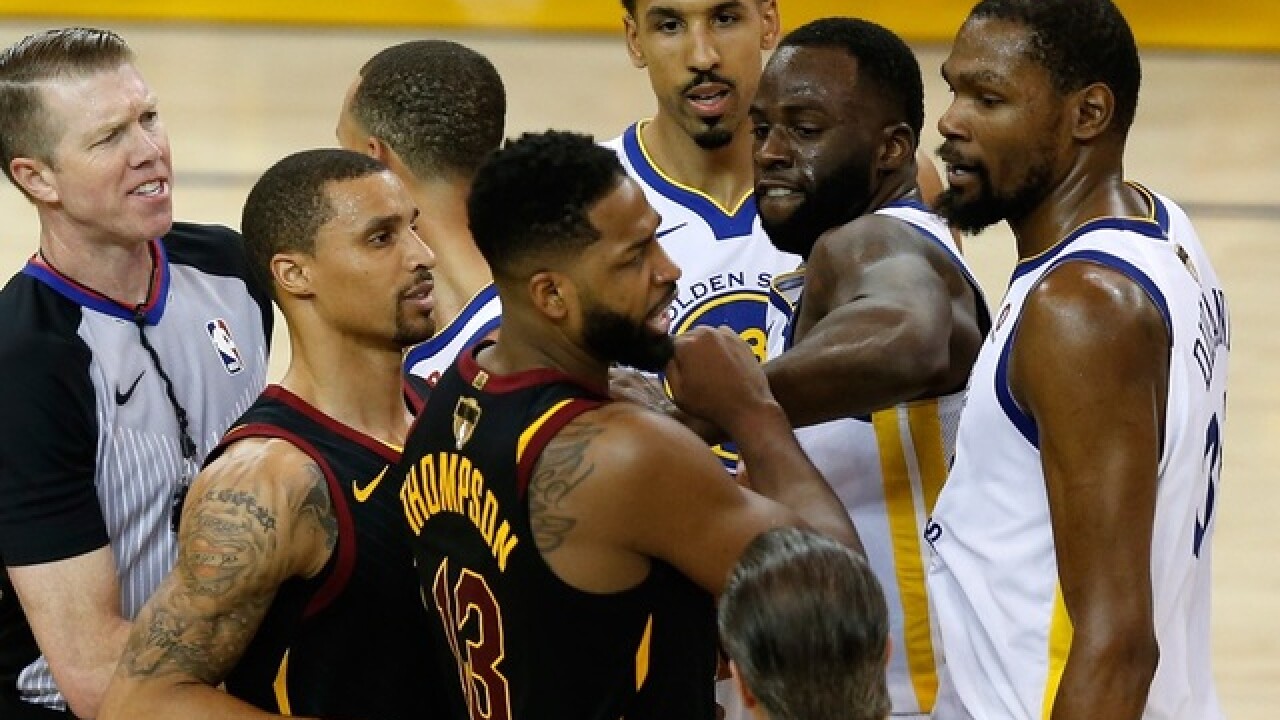 Image copyright 2018 Getty Images. All rights reserved. This material may not be published, broadcast, rewritten, or redistributed.
Lachlan Cunningham/Getty Images
<p>OAKLAND, CA - MAY 31: Tristan Thompson #13 of the Cleveland Cavaliers and Draymond Green #23 of the Golden State Warriors get involved in a altercation in overtime during Game 1 of the 2018 NBA Finals at ORACLE Arena on May 31, 2018 in Oakland, California.</p>

OAKLAND, Calif. -- J.R. Smith's blunder, a disputed replay overturn and a key missed free throw dealt the Cleveland Cavaliers an emotionally crushing loss in an opener of the NBA Finals that was ripe to be taken away from the defending champion Golden State Warriors.

They finally got a bit of good news during a day off Friday when the NBA determined that Cleveland big men Tristan Thompson and Kevin Love wouldn't be suspended for Game 2 on Sunday night for their roles in a late-game brawl.

The incident started in the closing seconds of Cleveland's 124-114 overtime loss Thursday night when Thompson was called for a flagrant 2 foul against Shaun Livingston. Thompson was ejected and then shoved the ball into Draymond Green's face before leaving the court.

The NBA fined Thompson $25,000 for failing to leave the court in a timely fashion and for his interaction with Green but downgraded the foul to a flagrant 1.

Love left the bench to argue the flagrant call and was on the court when the altercation started. But the league determined he didn't warrant a suspension because he returned to the bench immediately.

"I just think, especially when a game has been as hard-fought as that one, you don't like to see emotions spilling over at the end," commissioner Adam Silver said before executive vice president of basketball operations Kiki VanDeWeghe announced the penalties.

"You don't like to see the chippiness. It didn't from my standpoint necessarily get out of hand in that game, but I've been around this game long enough to know that even guys with best intentions, when provoked, they can easily cross a line that you don't want them to cross."

Everyone is still trying to figure out what went on in the final minute of regulation in Game 1. It started after LeBron James converted a three-point play to give Cleveland a 104-102 lead with 50 seconds left.

Then the game really went off the rails when George Hill got fouled with 4.6 seconds left and the Cavs trailing by one. He made the first free throw to tie it, missed the second.

Smith grabbed the offensive rebound, but instead of putting it back up or passing to an open James up top, he dribbled toward half court and threw a pass, running out the clock.

Coach Tyronn Lue said after the game that Smith though the Cavs were ahead, although Smith said he knew the game was tied and was waiting for a timeout to be called. Lue said he talked to Smith about what happened, but wouldn't give an explanation.

"J.R. can shake off anything, and when everybody tends to count J.R. out, that's when he comes through," Lue said. "So he's definitely going to start again. He's a big part of what we do. That last play is over, it's behind us, and now we've got to move on."

"I felt like the team did a great job. Put ourselves in a (position) to win the game. Me not hitting the free throw, I feel like cost our team the win. And I dealt with that last night," he said. "We're moving on as a team. We blew our chance, blew our opportunity. But we've got to focus on Game 2 now. It being one of the worst losses, got to kind of put it behind you now."

The Warriors had some questions of their own in terms of availability for Game 2. Klay Thompson, who briefly left the series opener after Smith slid into his left leg, said he is still sore but feeling much better, and he doesn't expect any issues for Sunday.

Andre Iguodala remains doubtful as he tries to recover from a bone bruise in his left knee that has sidelined him for the past five games. Coach Steve Kerr said Iguodala is improving each day but still not expected to be healthy enough for Game 2.

Kerr's bigger concern is figuring out a way to make things tougher on James after he scored 51 points on 19-for-32 shooting in the opener, when he was able to repeatedly drive to the basket.

"I didn't think we were very good against him last night," Kerr said. "I thought he was spectacular, but I didn't think we made it that difficult for him. That's always the challenge when you play a great player. There is this balance between accepting that he's going to get his numbers, but making it difficult. I never felt like we got him out of any sort of comfort zone last night."