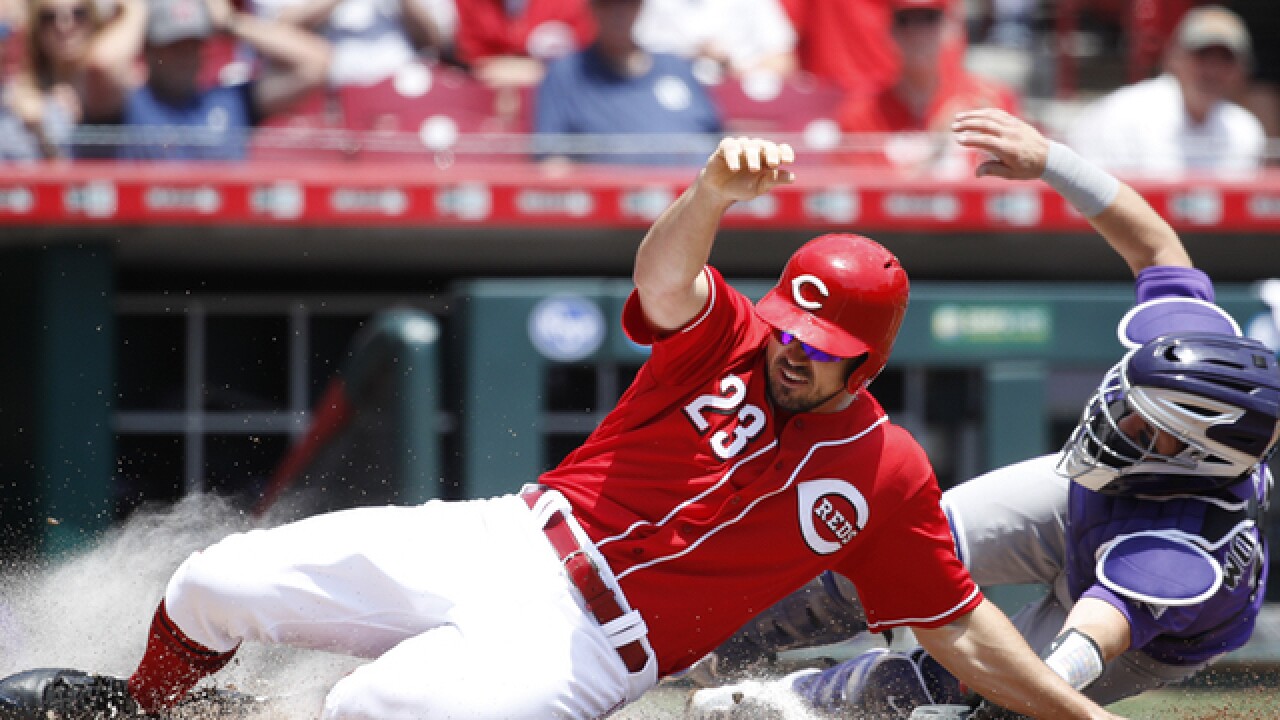 Image copyright 2018 Getty Images. All rights reserved. This material may not be published, broadcast, rewritten, or redistributed.
Joe Robbins
<p>CINCINNATI, OH - JUNE 07: Adam Duvall #23 of the Cincinnati Reds slides home with a run ahead of the tag by Tony Wolters #14 of the Colorado Rockies in the second inning at Great American Ball Park on June 7, 2018 in Cincinnati, Ohio. (Photo by Joe Robbins/Getty Images)</p>

CINCINNATI (AP) — Jesse Winker hit a two-run homer in the 13th inning, completing the Cincinnati Reds' late rally to a 7-5 victory on Thursday that averted a sweep by the Colorado Rockies.

One out away from getting their second series sweep at Great American Ball Park, the Rockies blew the lead in the ninth and wound up losing for the fifth time in seven games. They've blown leads in all of the five losses.

Left-hander Chris Rusin (0-2) hit Joey Votto with a pitch to open the 13th. Winker connected on his first game-ending homer, finishing the longest game for both teams this season.

Dylan Floro (2-1) allowed a pair of singles over three innings. He batted in the 12th and grounded out.

Left-hander Tyler Anderson gave up a pair of runs while going seven innings for only the second time this season, leaving with a 5-2 advantage before Colorado's struggling bullpen let another lead slip away.

The Reds loaded the bases off Mike Dunn with no outs in the eighth. Scott Oberg limited Cincinnati to a pair of runs with the help of right fielder Carlos Gonzalez's throw to the plate that nailed Eugenio Suarez, who tried to score the tying run from second on Winker's single.

Wade Davis blew a save in the ninth for only the third time this season. Pitching on the third straight day, Davis hit a batter, gave up Jose Peraza's single and threw a wild pitch. With two outs, Davis threw another wild pitch to Scott Schebler that tied it 5-5. He then fanned Schebler.

The Rockies got three runs in five innings off Tyler Mahle, including Anderson's squeeze bunt that made it 3-1 in the fourth.

Homer Bailey will make a rehab start in a minor league game within the next four or five days. Manager Jim Riggleman said Thursday he could return to the rotation when he's recovered from a sore left knee. The Reds thought about moving Bailey to the bullpen because of his poor showings — 1-7 with a 6.68 ERA — but instead put him on the 10-day DL.

Matt Harvey makes his sixth start for the Reds — he's 1-2 with a 4.44 ERA since Cincinnati got him in a trade with the Mets. The Reds open a three-game home series against the Cardinals, who have won the last 11 games between the teams.