Will he stay or go? Reds starter Matt Harvey happy either way 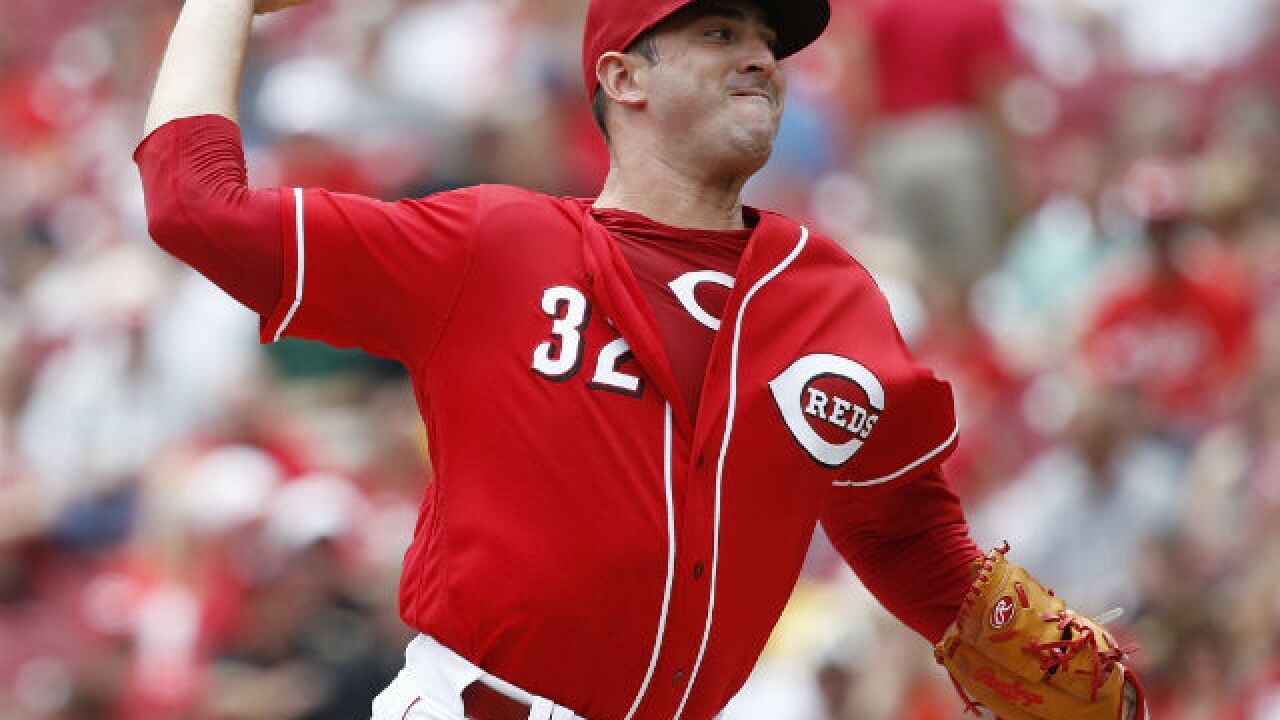 Image copyright 2018 Getty Images. All rights reserved. This material may not be published, broadcast, rewritten, or redistributed.
<p>CINCINNATI, OH - JULY 22: Matt Harvey #32 of the Cincinnati Reds pitches in the second inning against the Pittsburgh Pirates at Great American Ball Park on July 22, 2018 in Cincinnati, Ohio. (Photo by Joe Robbins/Getty Images)</p>

CINCINNATI - Will Matt Harvey stay with the Reds or will he go?

The right-hander apparently will be happy trade or no trade.

The slugging Pirates rocked Harvey in possibly his last Reds start Sunday. Afterward, Harvey said he would accept his fate either way.

"I'm here. I've enjoyed playing with these guys," said Harvey, who was traded from the Mets on May 8 after refusing a minor-league assignment.  "I think I've learned no matter where you want to be, no matter what you want to do, this is a business. So whatever is decided, my job is to go out and compete and do everything I can to help this team win."

According to baseball talk, the Reds are expected to trade Harvey by the July 31 non-waiver deadline because he's likely to command more than the Reds would be willing to pay on the free-agent market next winter.

Harvey has been the Reds' best starter almost since the time he got here, but even he was no match for the surging Pirates.

"When you don't execute pitches and leave stuff over the middle of the plate, a hot team is going to make you pay," Harvey said after the Pirates knocked him out in the fourth inning of a 9-2 loss.

Harvey (5-6) had won his last four starts, but the Pirates tagged him for eight runs and eight hits in 3 2/3 innings in by far his worst Reds outing.

Harvey hadn't allowed a home run in six starts before surrendering four against the Pirates, who completely dominated the three-game series and extended their winning streak to nine games.

"I went back and looked at the tape. The slider wasn't doing a whole lot, and the fastball was coming back over the plate," Harvey said.

Whatever happens to Harvey, the Reds have to rebound from their weekend disaster, and Harvey was optimistic they could with seven more games left on a 10-game homestand - three with the Cardinals starting Monday, then four with the Phillies.

"Hopefully we can get another streak going. We're going to flush this weekend," Harvey said. "It was a bad one for a lot of us."

After an encouraging 22-10 stretch leading up to the All-Star break, the Reds have lost four in a row for the first time since June 2-6.

The Pirates did not have a problem firing their cylinders.

"The bats showed up," Pirates manager Clint Hurdle said. "Really, everything did, but the offense was out in front of things. We did some damage early today."

Dickerson went 4 for 5 and finished the series with 21 total bases.

Gregory Polanco and Sean Rodriguez also went deep as Pittsburgh completed its first sweep of the Reds since Sept. 27-29, 2013.

Polanco's two-run shot in the first landed deep in the right-field seats. He also drove in Dickerson with a single in the fourth, extending Pittsburgh's lead to 8-0. It was more than enough for Ivan Nova (6-6), who allowed two runs and five hits in 6 2/3 innings.

The right-hander also singled off the wall in right-center in the sixth, stopping his hitless slide at 63 at-bats.

"Finally," he said. "That's one of the cooler moments I've had in baseball. Everybody was cheering for the base hit. Some of the guys asked me why I didn't have a double, but I was OK with a base hit."

Phillip Ervin had two hits and two RBIs for Cincinnati. Jose Peraza also had two of the Reds' six hits.

Marte extended his hitting streak to a career-high 15 games. It's the majors' longest active streak.

Nova improved to 4-1 with a 3.40 ERA in eight starts since coming off the disabled list on June 10. He had been sidelined by a sprained right ring finger.

Nova advanced Max Moroff to second base in the second with a sacrifice. Reds first baseman Joey Votto had a play at second, but his high throw pulled shortstop Jose Peraza off the bag. Peraza still had time to throw Nova out at first, completing a 3-6-4 sacrifice.

Riggleman announced right-hander Sal Romano (5-8) will start Wednesday's game against St. Louis, one day after Homer Bailey comes off the disabled list to start on Tuesday and giving the Reds a six-man starting rotation.