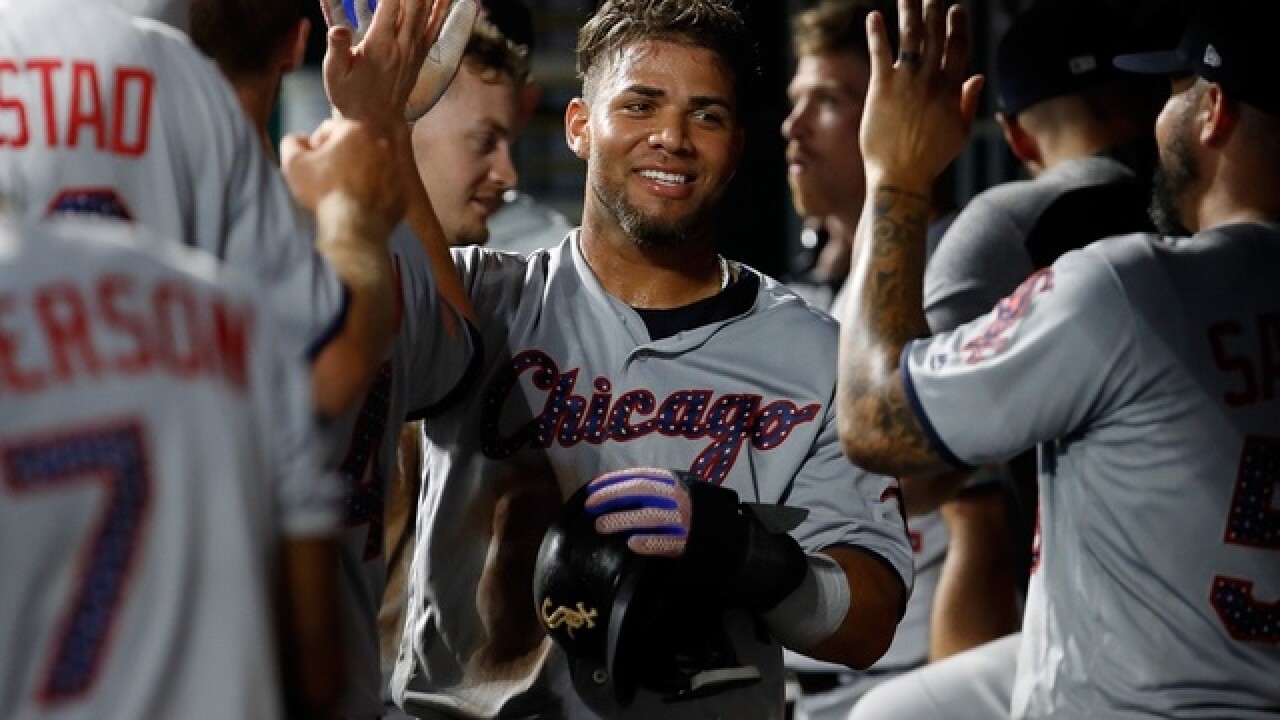 Image copyright 2018 Getty Images. All rights reserved. This material may not be published, broadcast, rewritten, or redistributed.
Andy Lyons
<p>CINCINNATI, OH - JULY 03: Yoan Moncada #10 of the Chicago White Sox celebrates with teammates after scoring in the 12th inning against the Cincinnati Reds at Great American Ball Park on July 3, 2018 in Cincinnati, Ohio. The White Sox won 12-8 in 12 innings. (Photo by Andy Lyons/Getty Images)</p>

CINCINNATI (AP) — A pair of two-homer performances. A bases-loaded triple, followed by another triple. So many unusual things went into Chicago’s biggest comeback of the season that even the White Sox had trouble keeping track.

No matter. They’ll take it.

Daniel Palka and Avisail Garcia each homered twice, and Yoan Moncada tripled with the bases loaded in the 12th inning as the White Sox pulled off their biggest comeback and beat the Cincinnati Reds 12-8 on Tuesday night.

It was a night of non-stop offense, right from the outset. Trailing 7-2 after five innings, the White Sox pulled even in the ninth on Garcia’s solo homer off Raisel Iglesias, then pulled it out with the help of a couple of Reds errors.

The White Sox loaded the bases with a walk and two errors. Moncada’s opposite-field triple off Jackson Stephens (2-1) broke the tie, and Yolmer Sanchez followed with another triple.

Hector Santiago (3-3) fanned six in two innings as the White Sox extended their domination in the interleague series. They’re 17-5 all-time against the Reds, including 11-3 in Cincinnati.

“Surreal,” said Chicago starter Lucas Giolito, who gave up three homers but wound up on the winning side. “From my perspective, I didn’t get the job done. It’s an awesome feeling that these guys play hard behind you.”

Jim Riggleman was ejected by plate umpire Eric Cooper during Chicago’s winning rally, his first ejection as the Reds’ interim manager. They had words as Riggleman was signaling from the dugout for an intentional walk.

“Then he made some comment that I didn’t like,” Riggleman said. “That’s kind of how the whole game went.”

The Reds got the better of a free-swinging game early on, surging ahead 4-0 before Giolito could record an out. Jose Peraza opened with a triple, Gennett hit his 14th homer , Joey Votto walked, and Eugenio Suarez followed with his 17th homer.

Suarez performed a salsa dance with Votto after he crossed the plate.

Adam Duvall added a three-run shot into the upper deck in left field in the fifth inning off Giolito for a 7-2 lead, the second time in his career that the right-hander has allowed three homers in a game.

Anthony DeSclafani also gave up a career-high three homers — two by Palka and one by Garcia, who went 3 for 6 and extended his hitting streak to a career-high 13 games.

The White Sox are 4-10 in interleague play this season. The Reds are 7-2. The loss snapped their streak of six straight wins against the AL.

The last time the White Sox and Reds played an extra-inning game was Game 6 of the “Black Sox” World Series in 1919. Chicago won that game 5-4 in 10 innings at Crosley Field.

Giolito started the Futures Game as part of the All-Star festivities at Great American Ball Park in 2015 and pitched two scoreless innings.

The Reds committed a season-high four errors — two by Suarez at third, one by Peraza at shortstop and one by Gennett at second base

Sanchez’s triple in the 12th came on a weird play. Right fielder Brandon Dixon stretched above the wall and grabbed the fly ball — robbing Sanchez of a homer — but the glove flipped off his hand as he hit the wall and the ball deflected back onto the field.

White Sox: Jose Abreu was out of the lineup a day after he fouled a pitch off his left ankle. X-rays were negative. Abreu pinch hit in the 11th inning and grounded out.