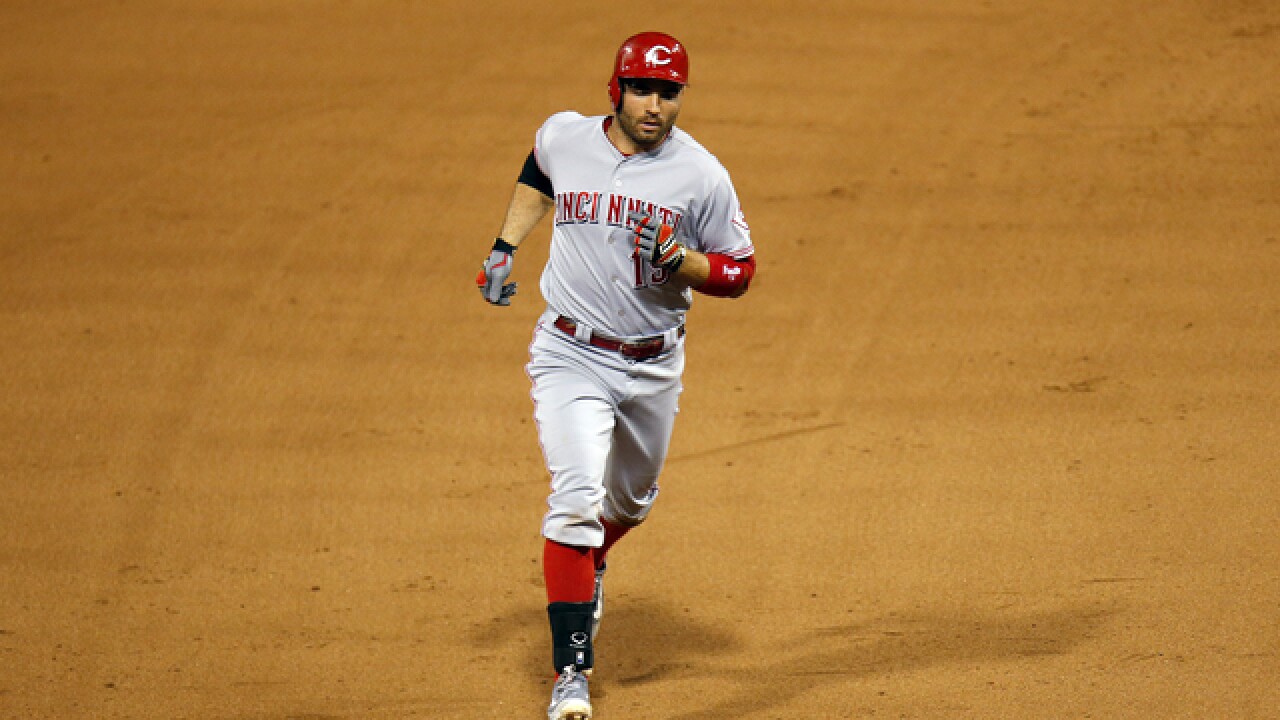 Justin K. Aller/Getty Images
<p>PITTSBURGH, PA - SEPTEMBER 10: Joey Votto #19 of the Cincinnati Reds rounds second after hitting a solo home run in the ninth inning during the game against the Pittsburgh Panthers at PNC Park on September 10, 2016 in Pittsburgh, Pennsylvania.</p>

CINCINNATI (AP) — Joey Votto’s single in the bottom of the ninth inning drove in Shogo Akiyama with the winning run as the Cincinnati Reds beat the St. Louis Cardinals 4-3 on Wednesday night.

Facing Giovanny Gallegos (1-1), Akiyama and Curt Casali walked with one out and Votto delivered a sharp line drive to right to send Akiyama sliding across the plate and extend his hitting streak to six games.

The Cardinals had loaded the bases with one out in the ninth, but Raisel Iglesias (2-2) struck Tyler O’Neill and Lane Thomas to escape.

The Reds avoided a three-game sweep to finish 3-4 on a homestand against the Cubs and Cardinals, two of the teams they’re chasing in the NL Central.

One night after the Reds needed five relievers and an infielder to pitch during a 16-2 loss, an efficient Tyler Mahle turned in a season-high seven innings. Mahle yielded four hits and three runs with two walks and three strikeouts.

Yadier Molina led off the Cardinals’ two-run fifth with his second homer of the season, a liner to left that clanged off a metal banister. Tyler O’Neill doubled to deep left-center field with one out and scored on Kolten Wong’s two-out double to left-center.

St. Louis starter Johan Oviedo lasted two outs into the fifth inning, allowing three hits and three runs with one walk and five strikeouts. He hit two batters, both in the fifth.

Oviedo hit Akiyama with a pitch with one out in the fifth inning. Barnhart followed with his second homer of the season, a line drive to center field that barely cleared the glove of a leaping Lane Thomas.

Brad Miller picked up on Wednesday where he left off on Tuesday, clubbing a shot to center field leading off the second inning for St. Louis, his fifth homer of the season. He hit a pair of two-run homers on Tuesday.

Eugenio Suárez led off the bottom of the second with a double to left-center field, went to third on a wild pitch to Mike Moustakas and scored the game-tying run on Akiyama’s two-out single up the middle.

Reds: Akiyama was hit just below the right knee with one out in the fifth inning. He stayed in the game.