Votto gets new shirt, Reds get little else, Pirates win 5-1 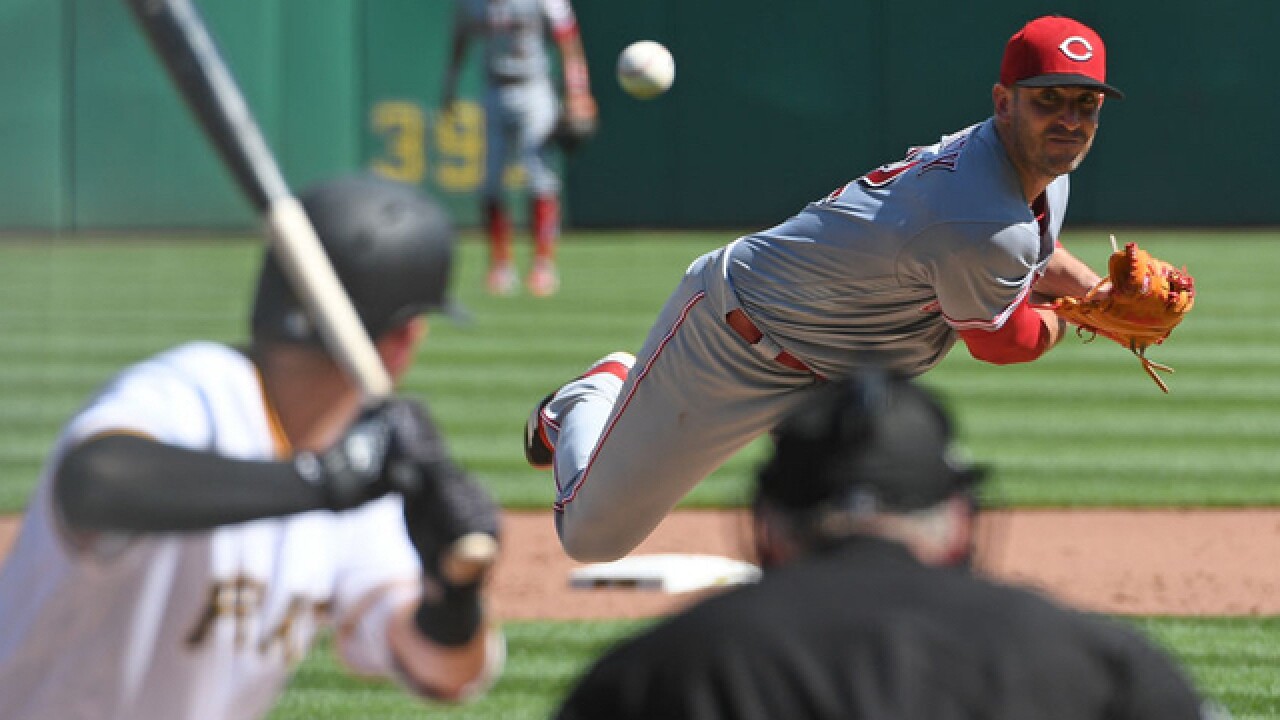 Image copyright 2018 Getty Images. All rights reserved. This material may not be published, broadcast, rewritten, or redistributed.
Justin Berl
<p>PITTSBURGH, PA - SEPTEMBER 03: Matt Harvey #32 of the Cincinnati Reds delivers a pitch to Kevin Newman #27 of the Pittsburgh Pirates in the fifth inning during the game at PNC Park on September 3, 2018 in Pittsburgh, Pennsylvania. (Photo by Justin Berl/Getty Images)</p>

PITTSBURGH (AP) — Reds star Joey Votto got a new shirt from a big fan at PNC Park, but Cincinnati wound up with little else Monday, blanked by Trevor Williams and the Pittsburgh Pirates 5-1.

In the middle of the fourth inning, Votto walked over to a fan sitting along the first base side who was wearing a T-shirt that read "Votto for President." Votto asked for the shirt, and the man obliged — the suddenly bare-chested fan and Votto exchanged first bumps.

Votto then gave the fan a Labor Day gift, an autographed jersey. That was the highlight of the day for Votto, who went 1 for 4 and grounded into a double play as the Reds lost for the ninth time in 12 games.

Trevor Williams (12-9) continued his stretch of strong starts by pitching 6 2/3 scoreless innings. He allowed five hits while striking out four and walking one.

Williams improved to 6-2 with a 0.66 ERA in his last nine starts, giving up four runs in 54 2/3 innings. It was his ninth outing of at least five innings without allowing a run this season.

Pittsburgh's Adam Frazier had career high-tying four hits, including a solo home run off Matt Harvey (6-8) with one out in the first inning and a two-run single in the seventh that stretched the Pirates' lead to 5-0. Frazier also had a double and three RBIs.

Pittsburgh's Gregory Polanco and Cincinnati's Scooter Gennett homered and had two hits each.

Polanco hit a run shot in the sixth inning that made it 3-0.

Gennett, the NL batting leader with a .320 average, broke up the Pirates' shutout bid with a solo drive off Kyle Crick in the eighth. Gennett also doubled in the first inning, but Williams worked out of a second-and-third jam with one out by striking Eugenio Suarez and getting Scott Schebler to fly out.

Harvey surrendered three runs and seven hits in six innings with three strikeouts and no walks.

Reds SS Blake Trahan was 1 for 3 in his major league debut, hitting a single off Williams in the seventh inning. He was promoted from Triple-A Louisville on Saturday.

Reds: LHP Cody Reed (0-1, 3.26 ERA) will make his third start and 13th relief appearance of the season Tuesday night after limiting Milwaukee to one run in 4 2/3 innings in his last outing.