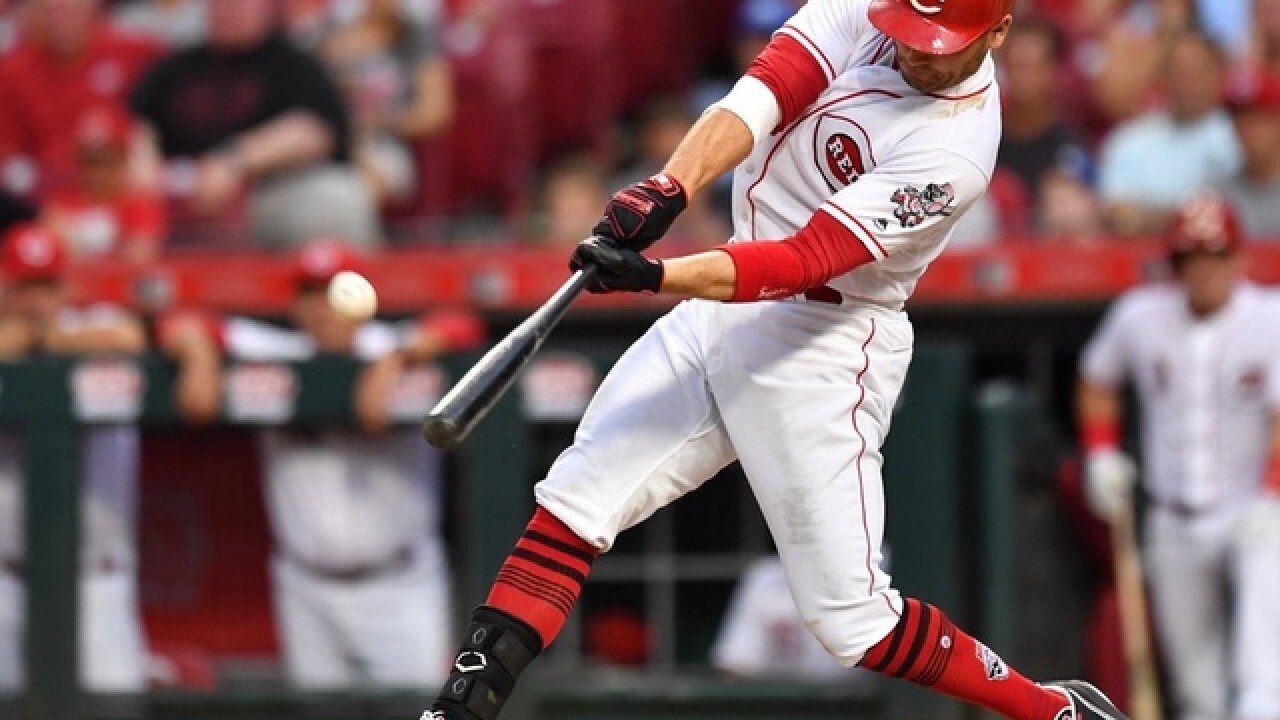 Image copyright 2018 Getty Images. All rights reserved. This material may not be published, broadcast, rewritten, or redistributed.
Jamie Sabau
<p>CINCINNATI, OH - JUNE 19: Joey Votto #19 of the Cincinnati Reds hits a grand slam in the third inning against the Detroit Tigers at Great American Ball Park on June 19, 2018 in Cincinnati, Ohio. (Photo by Jamie Sabau/Getty Images)</p>

Sal Romano (4-7) had a second straight solid outing, limiting the Tigers to four singles over seven shutout innings. Billy Hamilton also homered as the Reds pulled away to a 9-0 lead.

The Tigers had won five straight and moved within a game of .500. They haven't been to the break-even mark since they were a season-best 4-4 on April 8. They've wasted five chances to get back.

Trailing 9-0, Detroit finally broke through in the ninth when Wandy Peralta walked home a run and Leonys Martin followed with a double.

The Reds loaded the bases in the third with the help of a pair of walks from Matthew Boyd (4-5). Votto hit a high fly to right field that had just enough -- Nicholas Castellanos stretched his glove over the top of the wall and barely missed the ball. Votto's first homer since May 13 ended a 30-game drought. His last homer at Great American Ball Park was May 6.

Votto hit 36 homers last season, one shy of his career high. He has only seven this season.

Tucker Barnhart also had an RBI double off Boyd, who walked three batters, all of whom scored. The left-hander lasted only four innings and gave up five runs and six hits.

Romano was coming off perhaps his best performance in the majors. He went a career-high eight innings and gave up one run during a 5-1 win at Kansas City on Tuesday.

The Reds called up RH reliever Jackson Stephens and optioned RH reliever Austin Brice to Triple-A Louisville. Stephens was 0-0 with a 4.20 ERA in nine appearances for the Reds earlier this season.

Tigers: Reliever Drew VerHagen left the game in the seventh after getting hit in the face. He covered first base and missed the throw, with the ball hitting him on the left side of the nose. He was sent for X-rays.

Reds: RH Homer Bailey will be re-examined on Tuesday. He's been sidelined since June 2 with a sore right knee.

Tigers: Michael Fulmer (2-5) has gone seven innings and allowed one run in each of his last two starts. He's never faced the Reds.