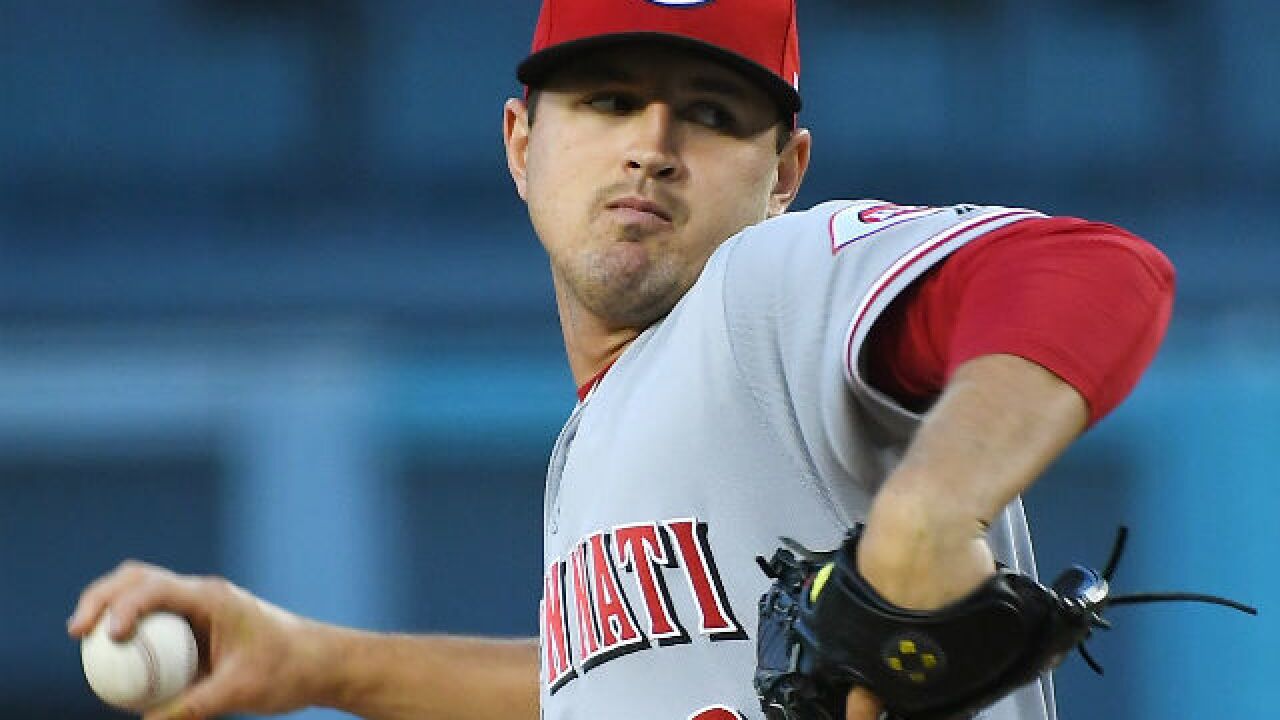 Image copyright 2018 Getty Images. All rights reserved. This material may not be published, broadcast, rewritten, or redistributed.
<p>LOS ANGELES, CA - MAY 10: Tyler Mahle #30 of the Cincinnati Reds pitches in the first inning of the game against the Los Angeles Dodgers at Dodger Stadium on May 10, 2018 in Los Angeles, California. (Photo by Jayne Kamin-Oncea/Getty Images)</p>

LOS ANGELES — Pitching close to home, Tyler Mahle wanted to give his family and friends something worth the drive from Orange County.

Early on, the Dodgers were running his pitch count high enough that Mahle figured he’d be gone.

“That would have been a bummer,” he said.

Instead, Mahle outdueled Walker Buehler in a matchup of 23-year-old right-handers, and the Cincinnati Reds beat the Los Angeles Dodgers 4-1 on Thursday night for their season-high third straight victory.

“I was happy I was able to grind it out for five and get the third win in a row for us,” he said. “That’s one of the top outings I’ve had to grind it out that I can think of. It was really fun, actually.”

Scooter Gennett went 3 for 4 and drove in three runs, while Mahle and three relievers combined on a four-hitter in the series opener.

“He did a really good job,” Gennett said of Mahle. “He kept us in the ballgame.”

Mahle fanned two, giving him 44 strikeouts in eight starts this season, which leads the majors among pitchers his age or younger.

Mahle (3-4) allowed one run and three hits in five innings and walked four. Dylan Floro and Wandy Peralta followed with one hit over 2 2/3 innings before Raisel Iglesias tossed 1 1/3 innings of relief with three strikeouts for his fifth save.

“It was some kind of impressive performance, especially with some things happening where he ended up throwing more pitches then we were hoping,” interim Reds manager Jim Riggleman said. “He really was electric with his stuff and he got better as the night went on.”

Buehler retired 15 of his first 17 batters before the Reds got to him in the sixth, ending his streak of 15 scoreless innings — longest by a Dodgers pitcher this season.

Gennett doubled in the tying and go-ahead runs with two outs in the inning, giving the Reds a 2-1 lead.

“I can’t give up two runs when we only have one,” Buehler said. “It’s just not going our way right now.”

Billy Hamilton added a run in the seventh on a two-out triple in the right-field corner that scored Tucker Barnhart, who hit a leadoff double. Hamilton was 2 for 4.

Gennett homered on the first pitch from Daniel Hudson in the eighth, extending the Reds’ lead to 4-1.

The last-place Reds ended their futility against the Dodgers. They had lost eight in a row overall and nine straight in Los Angeles.