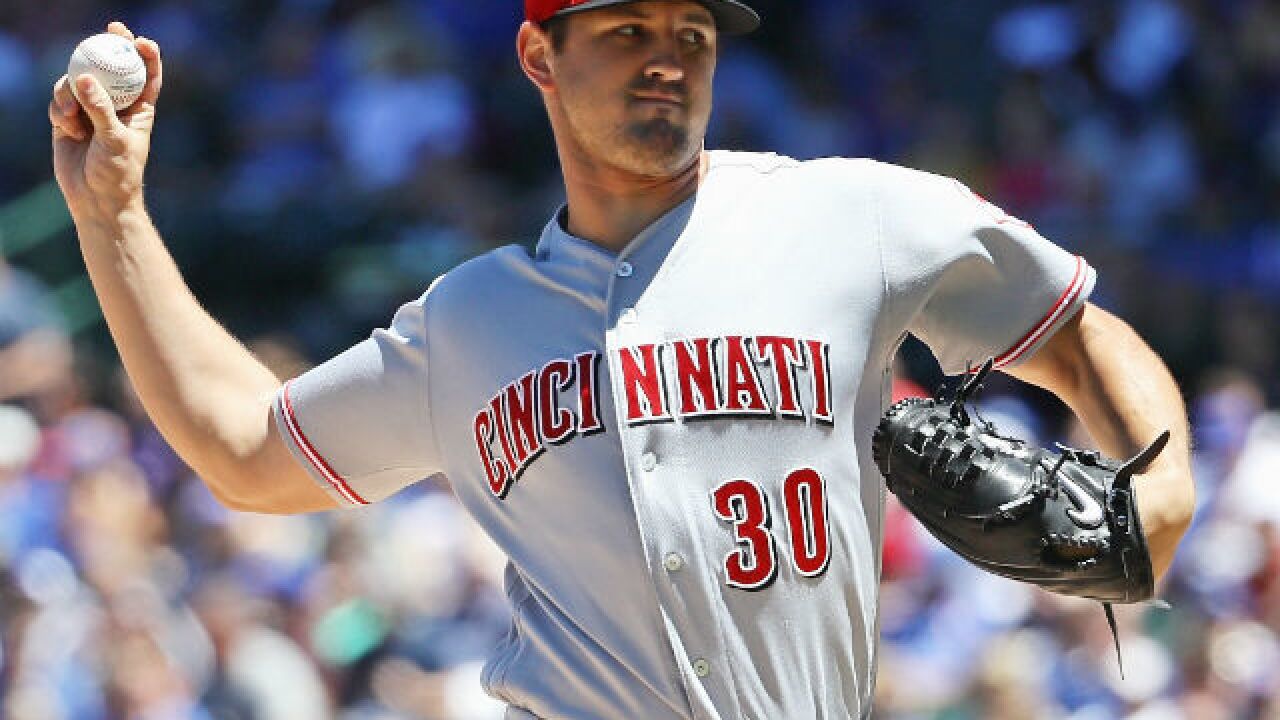 Image copyright 2018 Getty Images. All rights reserved. This material may not be published, broadcast, rewritten, or redistributed.
<p>CHICAGO, IL - JULY 06:  Starting pitcher Tyler Mahle of the Cincinnati Reds delivers the ball against the Chicago Cubs at Wrigley Field on July 6, 2018 in Chicago, Illinois. (Photo by Jonathan Daniel/Getty Images)</p>

CHICAGO - The Reds have climbed back to respectability in the NL Central, thanks largely to suddenly solid pitching.

Thanks, largely, to Tyler Mahle.

The rookie right-hander kept it up Friday by tossing one-run ball into the seventh inning and the Reds edged the Cubs 3-2 for their fifth straight victory over Chicago.

Mahle (7-6) allowed five hits and struck out four over 6 2/3 innings to win his fourth straight decision. In his last seven starts, the 23-year-old right-hander has a 2.06 ERA.

With a stiff wind blowing in from the north at Wrigley Field, Mahle could afford to be aggressive on a 70-degree day. Deep flies by both teams that might have carried into the bleachers in warmer conditions stayed in the ballpark.

“We had some guys who really got into some balls, and they didn’t go anywhere,” Mahle said. “I knew being kind of a flyball pitcher that I was going to be OK.”

“All of us realize that we’re a lot better than what we were at the start,” Mahle said. “We just go out and kind of expect to win at this point.”

The Reds swept the Cubs, the reigning NL Central champions, in a four-game series in Cincinnati two weeks ago.

“They always could hit,” Cubs manager Joe Maddon said. “The difference is they’re keeping the other side down now.

“It’s not just us. Their pitching is really, I think, the lynchpin of their success right now.”

Raisel Iglesias, Cincinnati’s third reliever, got the final five outs for his 17th save in 20 chances.

Adam Duvall and Scooter Gennett drove in runs as the Reds won for the 14th time in 18 games and ended the Cubs’ six-game winning streak. Billy Hamilton, Cincinnati’s No. 9 hitter, had three hits and leadoff man Jose Peraza had two.

Cubs starter Mike Montgomery (3-3) allowed three runs on six hits in five innings while walking two and hitting two batters. He scuffled in the fourth and fifth as the Reds built a 3-0 lead.

The Reds jumped ahead 2-0 in the fourth after loading the bases with no outs.

Duvall lined a single up the middle to score Gennett, then Joey Votto came home on Scott Schebler’s double-play grounder.

Cincinnati tacked on a run in the fifth when Hamilton scored from third on Gennett’s sacrifice fly.

The Cubs cut it to 3-1 in the bottom half of the inning when Almora grounded into a forceout and closed to 3-2 in the eighth on Zobrist’s sac fly.

INF Dilson Herrera was promoted from Triple-A Louisville to fill the spot vacated by LHP Cody Reed, who was sent down. Herrera had a .297 batting average and seven home runs at Louisville and was part of the Jay Bruce trade with the Mets last August.

Reds: Montgomery hit Votto with a pitch on the back of the helmet in the fifth, but Votto sprinted to first and remained in the game.

Cubs: Carl Edwards Jr. (right shoulder inflammation) was activated off the DL and Dillon Maples was optioned to Triple-A Iowa. ... Theo Epstein said Yu Darvish (right triceps tendinitis/right elbow impingement and inflammation) is feeling better and is optimistic the star right-hander will make a “solid contribution” this season. Epstein, the Cubs president of baseball operations, didn’t provide a timetable for the starter’s return. Darvish is in a strengthening phase. ... Epstein said INF/OF Kris Bryant (left shoulder inflammation) had a good day in the batting cage on Friday and is nearing a return. Epstein planned to meet with Bryant on Friday to determine next steps, which might include a brief rehab assignment.

Reds RHP Matt Harvey (4-5, 4.91) takes the mound against Cubs RHP Tyler Chatwood (3-5, 4.54) on Saturday. Harvey has won his last three starts, with a 1.47 ERA over 18 1/3 innings. Chatwood yielded seven runs in five innings to the Twins in his last outing, but still got a win as Chicago outslugged Minnesota 14-9. He leads the majors with 66 walks.