Fifth shutout of season for Reds 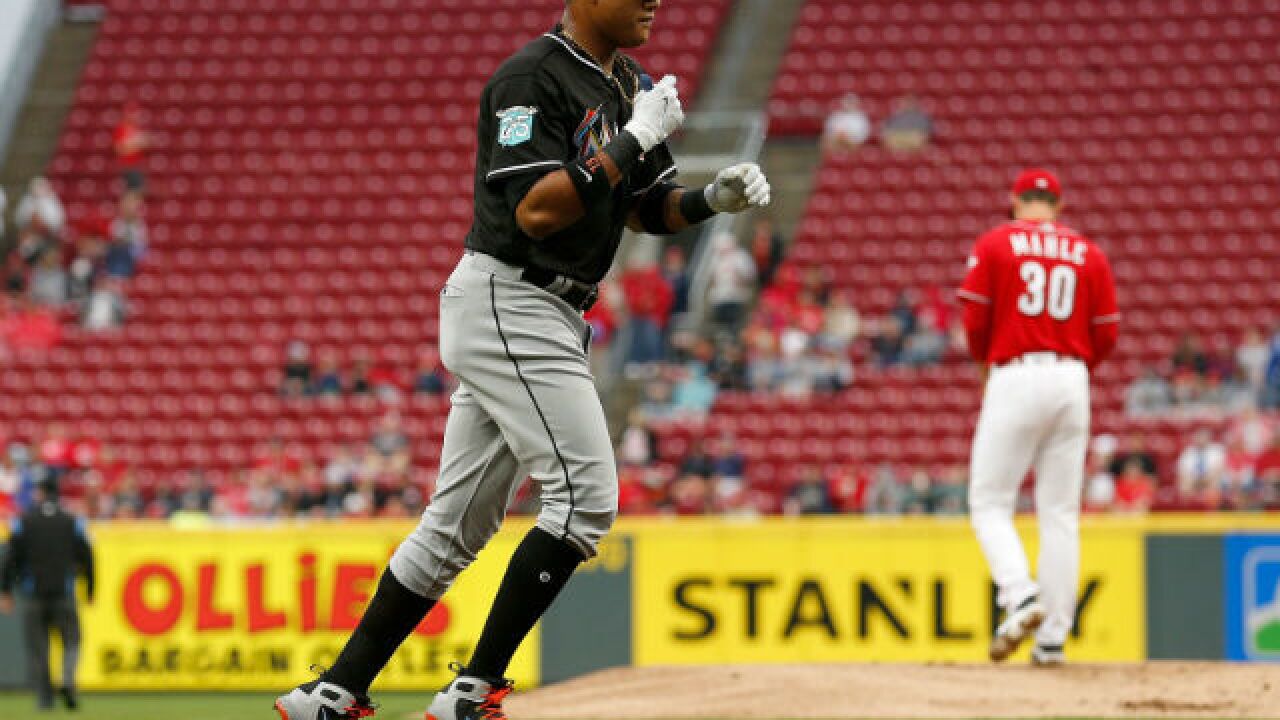 Image copyright 2018 Getty Images. All rights reserved. This material may not be published, broadcast, rewritten, or redistributed.
<p>CINCINNATI, OH - MAY 5: Starlin Castro #13 of the Miami Marlins jogs to home plate after hitting a two run home run off of Tyler Mahle #30 of the Cincinnati Reds during the first inning at Great American Ball Park on May 5, 2018 in Cincinnati, Ohio. (Photo by Kirk Irwin/Getty Images)</p>

CINCINNATI - Just when it looked like the Reds might drag themselves out of the gutter, they fell right back in.

The hitters took another night off with Tyler Mahle on the mound and left the rookie to sink or swim on his own Saturday night. Mahle did himself in with two gopher balls in an otherwise promising start, and the Miami Marlins beat up reliever Austin Price to put the finishing touches on a 6-0 win.

The Reds (8-25) were shut out for the fifth time this season and managed just four hits, two by Joey Votto, in taking their fourth loss in the last five games. Once Mahle (2-4) gave up a two-run homer in the first inning to Starlin Carto and a solo shot in the sixth to Justin Bour, it didn't matter that the Marlins (12-20) got three runs in the eighth off Price.

"I didn't really settle in," said  Mahle, who surrendered just five hits in six innings. "The one pitch they got to hit they hit well, but I continued to make just average pitches."

Miami got Smith (2-3) from the Yankees in the offseason as part of a deal for right-hander Michael King. The left-hander has been stingy in his last three starts, allowing only two runs and seven hits in 18 2/3 innings with 26 strikeouts.

"I feel like a kid," said Smith, who made two starts and seven relief appearances for New York last season. "It's awesome."

Smith had a few rough starts in April. Marlins coaches talked to him about throwing more strikes and challenging hitters, and it's made the difference.

Miami's J.T. Realmuto went 0 for 3 and was hit by a pitch, ending a 12-game hitting streak that was the longest active in the NL.

Mattingly received an honorary Doctor of Humane Letters degree from the University of Evansville. Evansville President Thomas A. Kazee traveled to Milwaukee when the Marlins played there last month to privately present the degree, which was announced Saturday as part of the school's commencement.

Mattingly grew up in Evansville, and two brothers attended the school. He went into the Yankees' organization after high school.

"I'm excited about it," Mattingly said. "I had two brothers go to that school, so since I was a kid I would go to their games."

Castro's first homer in the majors also came at Great American Ball Park. He homered in his first big league plate appearance off Homer Bailey on May 7, 2010, with the Cubs.

The game started 10 minutes late because of rain, which fell steadily through the early innings.

Second baseman Scooter Gennett was back in the Reds' lineup after being limited to pinch-hitting in the previous four games because of a sore throwing shoulder. He went 0 for 3 with pair of strikeouts.

Reds: RHP Michael Lorenzen threw 40 pitches without problem at the Reds' spring training complex. He has been sidelined since the start of the season with a strained pitching shoulder. He's scheduled to throw batting practice on Monday.

Marlins: Dan Straily (0-0) makes his second start since returning from an inflamed right forearm. He has lost both of his career appearances against his former team.

Reds: LHP Brandon Finnegan (0-2) has been the victim of blown saves in each of his last two starts. The Reds have lost all of his four starts this season.