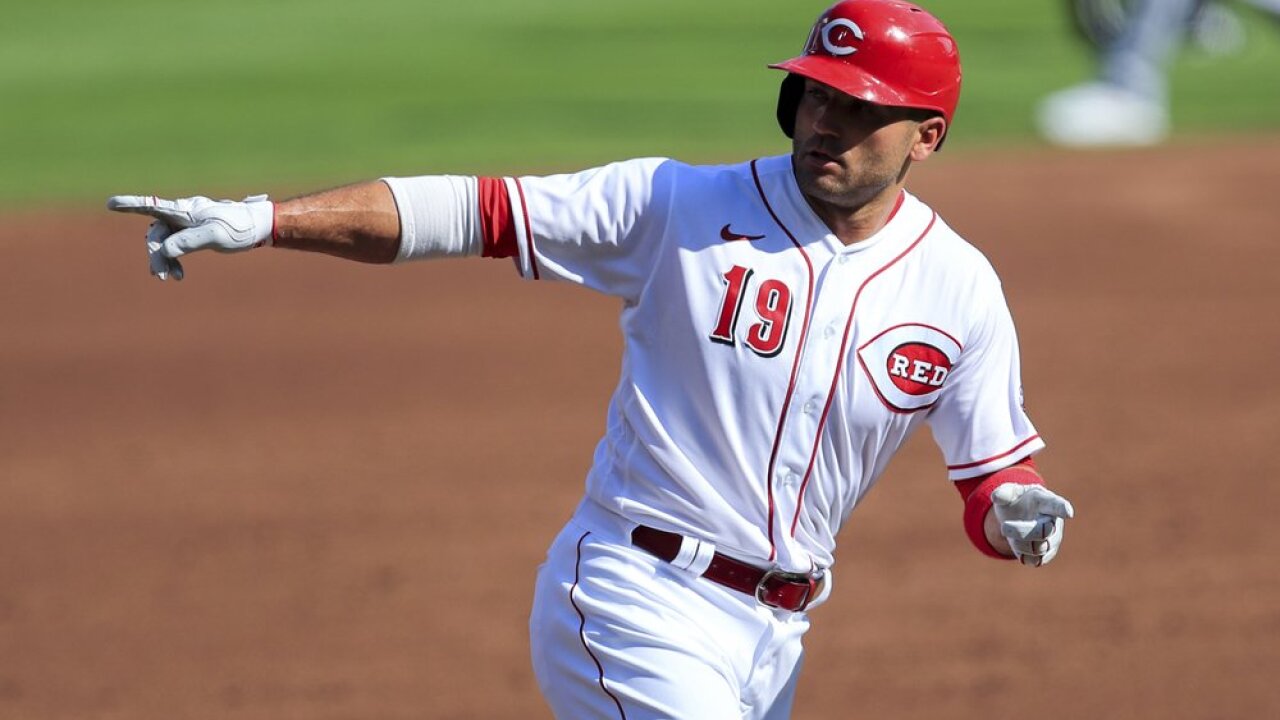 Cincinnati Reds' Joey Votto (19) points to members of the grounds crew after he hit a solo home run in the first inning during a baseball game against the Detroit Tigers at Great American Ballpark in Cincinnati, Saturday, July 25, 2020. (AP Photo/Aaron Doster)

CINCINNATI (AP) — Miguel Cabrera passed two superstars with a homer Saturday night, and JaCoby Jones hit a two-run shot in the ninth off Raisel Iglesias, rallying the Detroit Tigers to a 6-4 victory over the Cincinnati Reds.

Jones snapped a 4-4 tie with his homer into the Reds’ bullpen in center field off Iglesias (0-1), who set a Reds record for a reliever with 12 losses last year.

Cabrera salvaged his four-strikeout day with a seventh-inning, two-run home run that lifted Detroit to a brief 4-3 lead and broke a tie with Adrian Beltre for 30th place on the career home run list.

Cabrera now has 478. Hall-of-Famer Lou Gehrig and Fred McGriff are tied for 28th with 493 each.

The two RBIs boosted Cabrera past Hall-of-Famer Cal Ripken Jr. and into 25th place on the career RBI list with 1,696. He needs three to tie another Hall-of-Fame inductee, Jim Thome.

Reds starter Luis Castillo reached double figures in strikeouts for the 10th time in his four-year career, fanning 10, including Cabrera swinging all three times in three appearances. The 2019 All-Star allowed six hits and one run with one walk in six innings.

All three runs allowed by Detroit starter Iván Nova came on home runs, Joey Votto’s second in two days in the first inning and Freddy Galvis’ two-run shot in the second. Nova allowed just one other hit in five innings.

Buck Farmer (1-0) pitched a scoreless eighth to get the win. Joe Jiménez gave up a walk in the ninth while getting his first save.