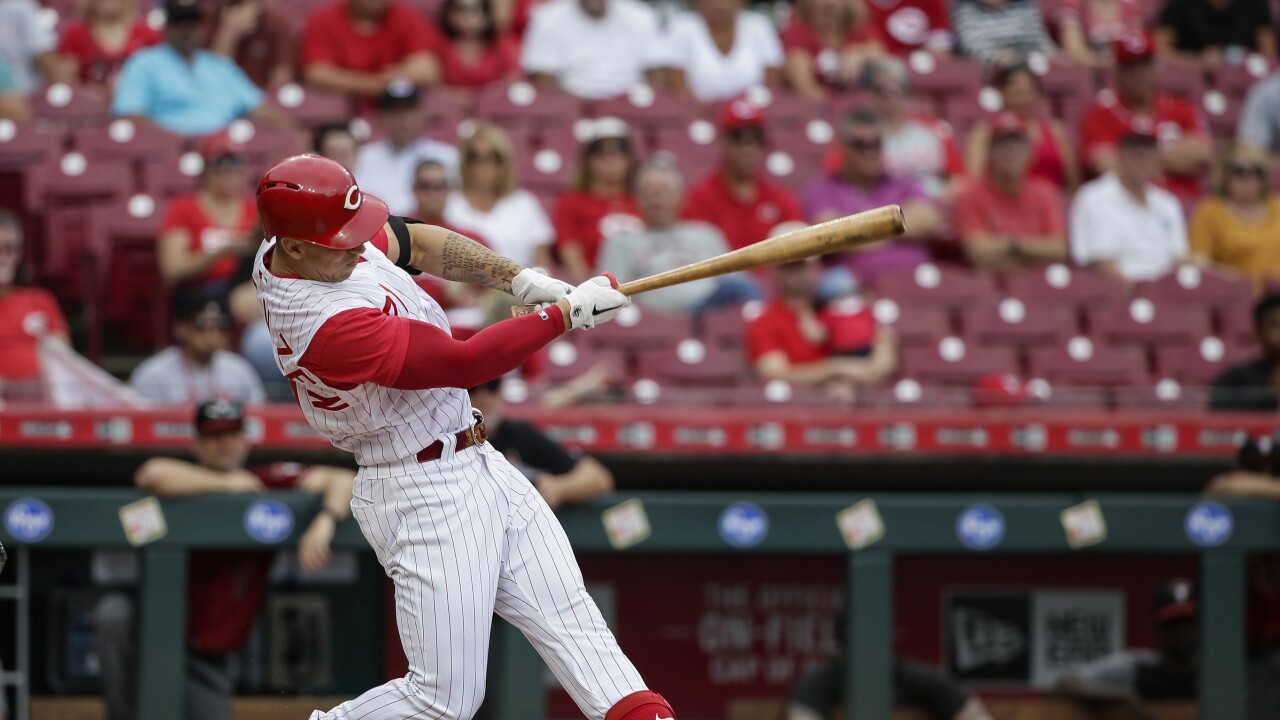 Silas Walker | Getty Images
Michael Lorenzen of the Cincinnati Reds hits the game-winning double against the Arizona Diamondbacks during the ninth inning at Great American Ball Park on Sept. 08, 2019 in Cincinnati, Ohio.

CINCINNATI — By now we should have arrived at the conclusion that Michael Lorenzen is not only a good hitting pitcher, he’s a good hitter plain and simple. He’s a pretty good center fielder, too.

The novelty of the right-handed relief pitcher batting might wear off at some point, but it hasn’t yet.

Fun is not how opposing pitchers might describe a chiseled 6-foot-3, 217-pound mass of human strolling to home plate, one who knows what the pitcher is thinking, because he is one of them.

Lorenzen does that with regularity.

Against the Philadelphia Phillies on Sept. 4 at Great American Ball Park, Lorenzen did something no player had done since Babe Ruth: Earn the victory as a pitcher, play the outfield, and hit a home run in the same game.

Four days after that game against the Phillies, Lorenzen capped a tremendous nine-pitch at-bat with a ringing double to left field to drive in the winning run in the ninth inning of a 4-3 victory over the Arizona Diamondbacks. It was his first career walk-off hit, and the first game-winner for a Reds pitcher since Randy Keisler’s walk-off hit against the Nationals in 2005.

“He’s doing a lot,” said Reds manager David Bell. “He’s getting the opportunity to contribute as a position player, and not just in any situation. He’s earned that. It’s got to be a great feeling for him to contribute like that.”

In the win over the Diamondbacks, Lorenzen wasn’t a pitcher at all. The plan was for him to take three days off throwing. So, he sat in the dugout instead of the bullpen, took swings in the cage and prepared for a pinch-hitting opportunity.

“I watched video and I was watching at-bats, so when they do call me, I already had been playing scenarios in my head,” he said. “(Reds assistant hitting coach) Donnie Ecker is in the cage with us. We’re always talking about approach. I’m always thinking about things.”

In addition to his obvious physical tools, perhaps this is what sets Lorenzen apart from other pitchers: he prepares to hit. Just as he studies how to approach facing hitters, he also considers how they might approach him. His description of the at-bat leading up to his walk-off hit off Arizona Diamondbacks right-hander T.J. McFarland was Votto-esque.

“I knew they were trying to get a double-play ball out of me, so I was trying to get my eyes under the baseball so I can try and lift it somewhere,” he said. “I really just wanted to see him deep. He had me out front on one change-up that was really good. I was like, man, I think he’s going to go back to that more. He came back with three fastballs in a row and I was able to get a barrel on one.”

Lorenzen isn’t primarily paid to hit, of course. At least not yet.

On the mound, Lorenzen is an integral part of a Reds bullpen that ranked among the best in the National League for most of this season. He leads the staff in appearances and innings pitched. Heading into this week, he ranked second in the NL with 74 2/3 innings pitched. In 27 appearances since the All-Star break, he owned a 2.17 earned-run average.

“He’s still a pitcher for us, first,” said Bell.

This season, he appeared in 106 of the Reds’ first 143 games. He also became the first player in Reds franchise history whose primary position is pitcher to appear in each of the first six games of a season.

“I’m super grateful for the opportunity David Bell has given me,” Lorenzen said. “I know the coaching staff has been pulling for me. The help they’ve given me with preparation and stuff, it’s just a great situation for me.”

Lorenzen also is special in other ways, of course. His strong faith has helped him connect with fans and teammates and it is something he carries with him in every aspect of his life, whether he’s at the ballpark or not.

His first career home run on Aug. 19, 2016, three days after his father’s passing, is among the most emotional moments in Great American Ball Park’s history.

It’s fair to label this a disappointing 2019 season for the Reds, especially coming off a productive offseason, and managing to mostly waste some of the best starting pitchers we’ve seen here in quite some time. But there have been good stories: Aristides Aquino, Nick Senzel’s debut and Sonny Gray among them.

Then there’s Lorenzen. You couldn’t make him up if you tried.

“Pitching has made me a better hitter,” Lorenzen said. “There are a lot of pitches in college I used to swing at that I don’t swing at anymore.”