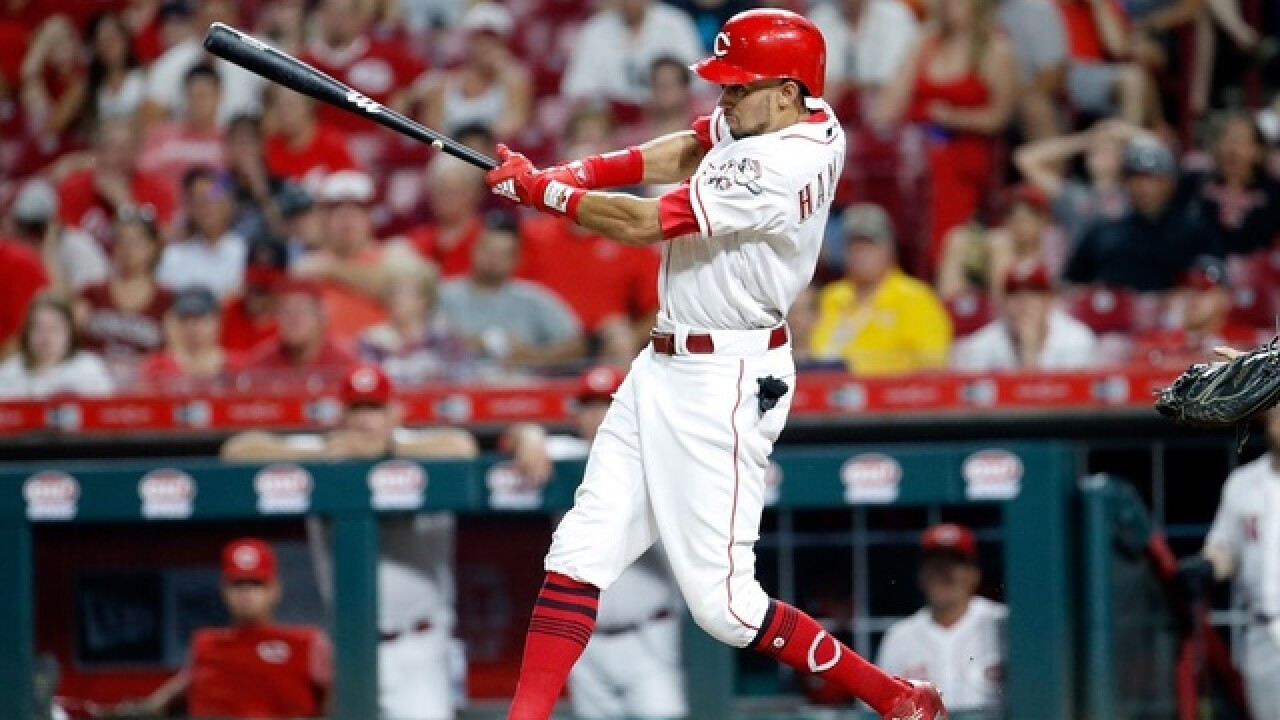 Copyright 2018 Scripps Media, Inc. All rights reserved. This material may not be published, broadcast, rewritten, or redistributed.
Andy Lyons
<p>CINCINNATI, OH - JUNE 28: Billy Hamilton #6 of the Cincinnati Reds hits a single in the ninth inning against the Milwaukee Brewers at Great American Ball Park on June 28, 2018 in Cincinnati, Ohio. (Photo by Andy Lyons/Getty Images)</p>

CINCINNATI (AP) -- Eric Thames doesn't give much thought to the way he wrecks the Reds, leaving everyone else to marvel.

Thames hit a three-run homer in the seventh inning Thursday night, and the Milwaukee Brewers slowed the Cincinnati Reds' best surge of the season with a 6-4 victory .

Thames has been the Reds' biggest nemesis. He hit a record 10 homers against Cincinnati last year -- the most by a Brewer against one team in a single season. Thames gave the Brewers a 5-4 lead when he homered in the seventh inning off reliever Amir Garrett (0-1).

Thames' third home this season against the Reds was the turning point in a game that started badly for the Brewers and included a benches-clearing incident in the third inning when Cincinnati's Joey Votto exchanged words with catcher Erik Kratz.

"I'm not really thinking about, ‘It's the Reds, yeah I'm going to get some hits,' or whatever," Thames said. "In this park, the ball will travel a little bit, so that's nice. For me, it doesn't matter if it's the Royals, the Yankees or the Reds, I try to have the same approach."

Thames is 3 of 3 in his career against the left-handed Garrett with three homers.

"Me and him, we have a past history -- three home runs," Garrett said. "He got me today. Sometimes, you get got. That's how the game is."

Milwaukee beat the Reds for the sixth straight time and improved to 6-1 overall against Cincinnati this season, including 4-0 at Great American Ball Park.

Junior Guerra (4-5) gave up Jose Peraza's second career leadoff homer and Jesse Winker's two-run shot while getting his first victory since May 14. Corey Knebel pitched the ninth for his eighth save in 10 chances.

The last-place Reds were the hottest team in the NL Central heading into the game, winning nine of their last 10 games.

Votto was in the middle of a dispute for the second straight game.

The third inning opened with Votto thinking he'd drawn a walk on a 3-1 pitch, but plate umpire Roberto Ortiz called it a strike. When Votto returned to the batter's box, he exchanged words with Kratz. Votto removed his batting helmet, and the benches and bullpens emptied.

Players milled briefly, many joking with one another. When play resumed, Votto flied out.

"It was just a little bit of a misunderstanding at the plate," Votto said. "It was just two guys having words. It was really nothing."

Votto was ejected in Atlanta on Wednesday by plate umpire Carlos Torres for arguing a called third strike, his eighth career ejection.

The Brewers called up LH reliever Mike Zagurski from Triple-A Colorado Springs and optioned RH Adrian Houser. Zagurski last pitched in the majors in 2013 with the Pirates. He played in the Japan Central League in 2015-16.

Thames homered off a left-hander for the first time since June 6 last year against San Diego's Ryan Buchter. Thames missed 41 games earlier this season with a torn ligament in his left thumb. His three homers off Garrett are his highest total off any pitcher. He has six homers in 34 career at-bats in GABP.

"We've had no answer for him," interim Reds manager Jim Riggleman said.

Aguilar has homered in three consecutive games for the second time this season -- he also did it from May 18-20. He recorded his eighth three-hit game this season, a career high.

Brewers: CF Christian Yelich left the game with a tight lower back after he grounded out in the first inning. He felt his back tighten a couple steps toward first base. ... Travis Shaw was back at third base after missing two games with a sore right wrist. He took batting practice pregame and felt good enough to play, although the wrist is likely to bother him at times. He went 0 for 4.