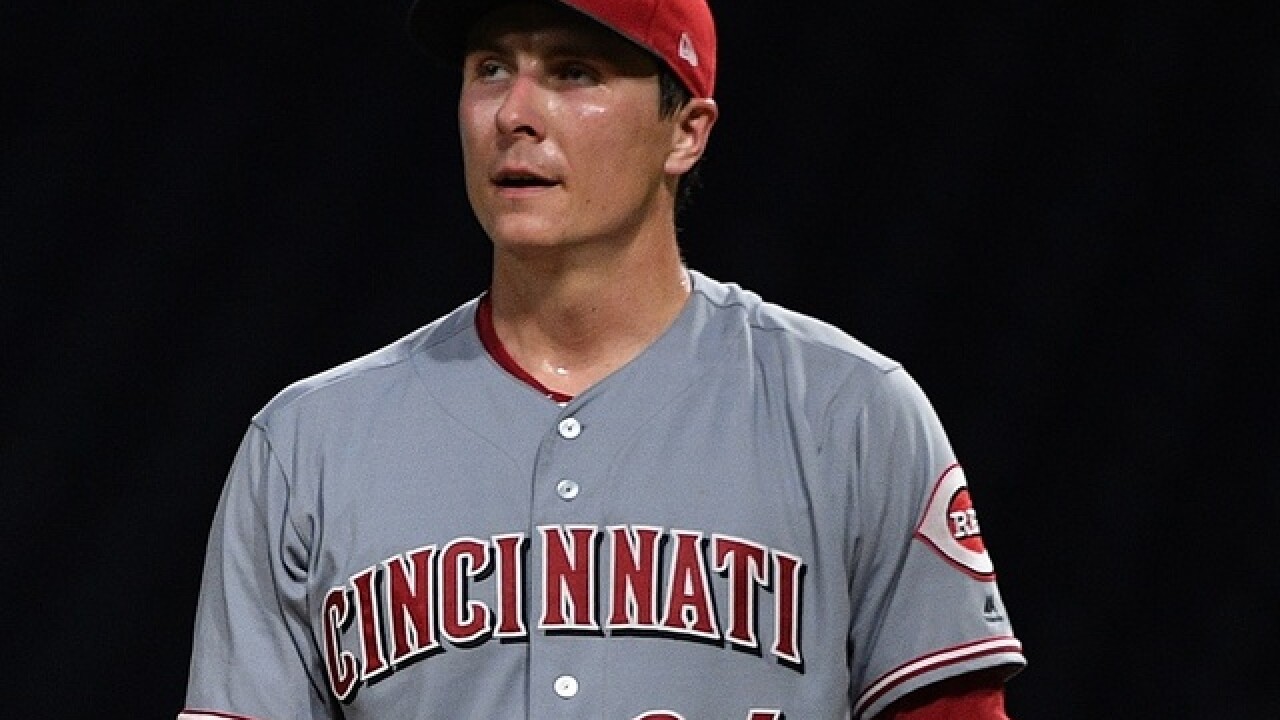 Copyright 2018 Scripps Media, Inc. All rights reserved. This material may not be published, broadcast, rewritten, or redistributed.
Justin Berl
<p>PITTSBURGH, PA - SEPTEMBER 05: Homer Bailey #34 of the Cincinnati Reds reacts after giving up a single to Adam Frazier #26 of the Pittsburgh Pirates in the third inning during the game at PNC Park on September 5, 2018 in Pittsburgh, Pennsylvania. (Photo by Justin Berl/Getty Images)</p>

PITTSBURGH (AP) -- Jameson Taillon pitched five effective innings and helped send Homer Bailey to yet another loss as the Pittsburgh Pirates beat the Cincinnati Reds 3-2 on Wednesday night to sweep their three-game series.

Taillon (12-9) allowed only one run as he scattered eight hits and walked none while striking out six. He is 5-2 with a 2.56 ERA in his last eight starts.

Felipe Vazquez survived a shaky ninth inning, allowing Dilson Herrera's pinch-hit RBI double with none out, before earning his 30th save. After Herrera made it 3-2, Vazquez struck out Philip Ervin and Billy Hamilton, then walked Jose Peraza and Joey Votto before getting NL batting leader Scooter Gennett to hit a game-ending comebacker.

Bailey (1-14) lost his ninth straight decision and the Reds are 1-19 in his starts this season after he gave up three runs in five innings. Bailey's lone win came May 12 at Dodger Stadium.

Gregory Polanco and Francisco Cervelli hit back-to-back RBI singles with one out in the third to snap a 1-all tie. Colin Moran drew Pittsburgh even an inning earlier with a run-scoring double.

Peraza opened the scoring with a home run in the first. The Reds stranded nine runners, including leaving the bases loaded in the fifth when Taillon struck out Scott Schebler to end the inning on his 100th and final pitch.

Peraza, Schebler, Votto and Mason Williams each had two hits for the Reds, who outhit Pittsburgh 11-6.

The Pirates lead the season series 12-4.

Pirates: RHP Chad Kuhl (strained right forearm) had a 30-pitch bullpen, throwing all fastballs, and the team is hopeful he will be able to pitch in either a major league game before the end of the season or in the fall instructional league. Kuhl has been out since June 27.

A grand for Bailey

Bailey, a 12-year veteran, recorded his 1,000th career strikeout in the fourth when he got Taillon swinging to end the inning. Bailey threw the first of two career no-hitters at Pittsburgh in 2012.

Pirates INF Kevin Kramer made his major league debut in the seventh inning, flying out as a pinch-hitter. He was called up from Triple-A Indianapolis on Tuesday. SS Kevin Newman was on first base at the time, which surely delighted fans of the TV comedy series "Seinfeld."

Pittsburgh 1B Josh Bell was on the bench for a second straight night. He is hitless in 13 at-bats over his last four games.