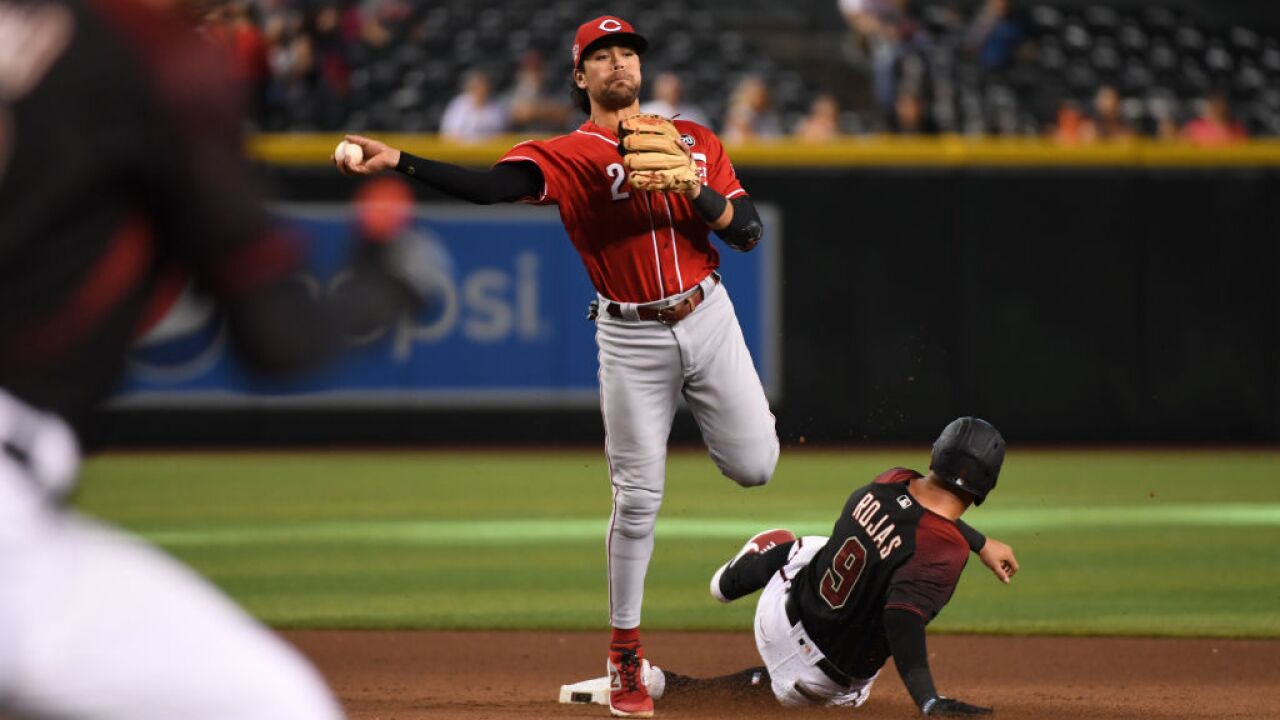 Norm Hall/Getty Images
PHOENIX, ARIZONA - SEPTEMBER 15: Alex Blandino #2 of the Cincinnati Reds turns a double play on a ground ball hit by Nick Ahmed #13 of the Arizona Diamondbacks as Josh Rojas #9 slides into second base during the eighth inning at Chase Field on September 15, 2019 in Phoenix, Arizona. Reds won 3-1. (Photo by Norm Hall/Getty Images)

PHOENIX (AP) — Eugenio Suárez homered twice in support of Trevor Bauer, who held his former team to one run on four hits in the Cincinnati Reds' 3-1 win over the Arizona Diamondbacks on Sunday.

Suárez pulled into a tie for the major league home run lead at 47 with Pete Alonso of the New York Mets, who played later Sunday. The Reds, with two wins in their three-game series with Arizona, did more damage to the Diamondbacks' fading playoff hopes.

The Diamondbacks' seventh loss in eight games dropped them 5½ games behind the Chicago Cubs for the second NL wild card. They have scored 12 runs total in those eight games.

Bauer (11-12) lasted eight innings with nine strikeouts and a walk in his longest start with the Reds. The right-hander arrived in a trade with Cleveland at the deadline.

Bauer struck out the side in his final inning of work. Raisel Iglesias pitched the ninth for his 31st save.

The Reds went ahead 2-1 on back-to-back home runs from Josh VanMeter, his eighth, and Suárez, who hit his off the batter's eye in center field.

Suárez drilled his second of the day a few feet to the left of where his first one landed.

Zac Gallen (3-6) was charged with three runs on five hits in 5 2/3 innings. He struck out five and walked two. Gallen has allowed three or fewer earned runs in each of his first 15 career starts, one of only two NL starters in history to do so.

Wilmer Flores lined a 1-2 pitch from Bauer into right-center field to drive in Alex Avila from second base with two outs in the bottom of the third, giving Arizona the early lead. Flores has 9 RBIs in his last 13 home games.

The Reds got out of that inning with Aristides Aquino's throw from right field to third base to tag Flores trying to take an extra base on Ketel Marte's single.

Reds: IF Freddy Galvis wasn't in the lineup because of a sore left knee. He left Saturday's game in the seventh inning.

Reds: RHP Sonny Gray (10-7, 2.80 ERA) is the scheduled starter against the Chicago Cubs in the opener of a three-game series Monday at Wrigley Field. Gray is 2-1 against the Cubs this season.

Diamondbacks: Arizona opens a three-game series against the Miami Marlins, with LHP Robbie Ray (12-8, 4.30 ERA) set to start Monday. Ray, who was bothered by a blister in his last start, has a four-game winning streak at home.