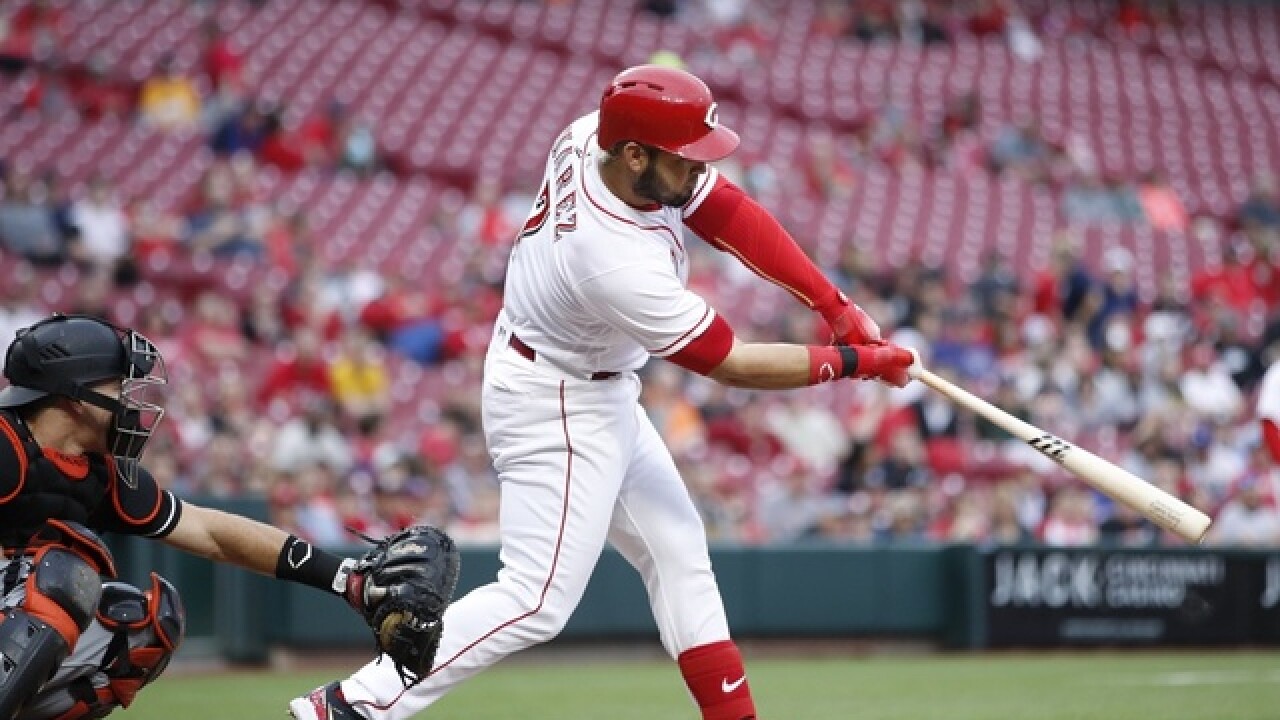 Copyright 2018 Scripps Media, Inc. All rights reserved. This material may not be published, broadcast, rewritten, or redistributed.
Joe Robbins
<p>CINCINNATI, OH - MAY 04: Eugenio Suarez #7 of the Cincinnati Reds hits a three-run home run in the first inning of a game against the Miami Marlins at Great American Ball Park on May 4, 2018 in Cincinnati, Ohio. (Photo by Joe Robbins/Getty Images)</p>

CINCINNATI (AP) -- Eugenio Suarez surprised everyone by missing only 16 games because of a broken right thumb. His hitting spree since his return has been just as impressive.

Suarez hit a three-run homer that extended his surge, and Sal Romano made another barehand play on the mound Friday night, leading the Cincinnati Reds to a 4-1 victory over the Miami Marlins.

The Reds ended a three-game losing streak and improved to 8-24, their worst start since the Great Depression.

Suarez homered into the upper deck in left field in the first inning off Wei-Yin Chen (1-1), who lasted only four innings in his second start of the season. Adam Duvall followed with another homer that ended his 0-for-9 slump.

"It was a really good start," Suarez said. "When you score four in the first, everybody's comfortable."

The Reds signed Suarez to a seven-year, $66 million deal during spring training, their first significant contract during their rebuild. Suarez missed 16 games with a broken right thumb, costing Cincinnati's struggling lineup one of its top run producers.

In eight games since his return, Suarez is 10-for-29 with three doubles, two homers and 13 RBIs. He's 10 for 20 with runners in scoring position.

Romano (2-3) had a momentary fright for the second straight start at Great American Ball Park. He stuck out his pitching hand to grab Chen's hard-hit grounder in the third. A trainer visited, and Roman threw a practice pitch before continuing.

He also made a barehand grab of a comeback grounder April 23 against the Braves and said afterward he wouldn't do it again.

"I've probably got to stop doing that," Romano said. "It's a reaction thing. I guess it was harder than the last one, but it didn't hurt at all."

Romano gave up Lewis Brinson's homer in 5 2/3 innings. David Hernandez escaped a bases-loaded threat in the sixth. Raisel Iglesias pitched the ninth for his fourth save in five chances, completing a five-hitter.

Chen was sidelined at the start of the season by a strained pitching elbow. He made two rehab appearances and then his debut last Saturday against Colorado, giving up one run in 5 1/3 innings. He wasn't nearly as good the second time.