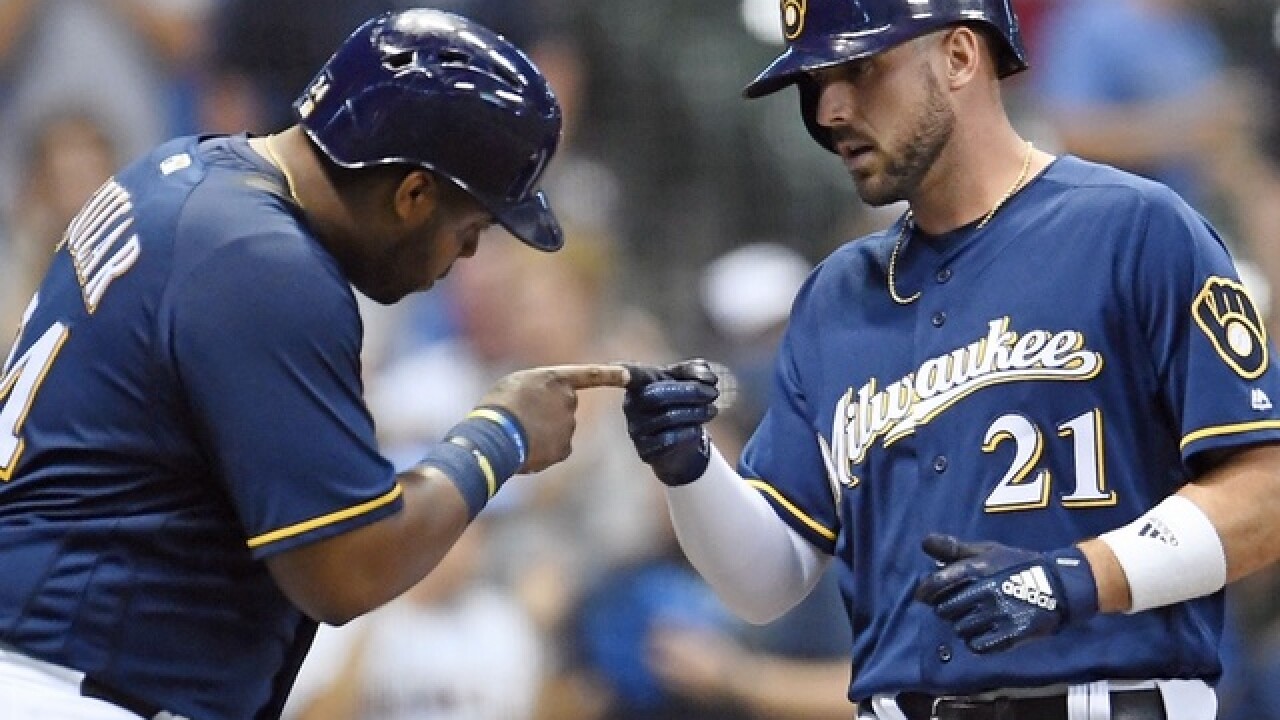 Image copyright 2018 Getty Images. All rights reserved. This material may not be published, broadcast, rewritten, or redistributed.
Stacy Revere
<p>MILWAUKEE, WI - AUGUST 20: Travis Shaw #21 of the Milwaukee Brewers is congratulated by Jesus Aguilar #24 following a two run home run against the Cincinnati Reds during the sixth inning of a game at Miller Park on August 20, 2018 in Milwaukee, Wisconsin. (Photo by Stacy Revere/Getty Images)</p>

MILWAUKEE (AP) -- Travis Shaw and Christian Yelich homered, Chase Anderson settled in after giving up two solo homers and the Milwaukee Brewers rallied for a 5-2 victory over the Cincinnati Reds on Monday night.

Shaw's two-run homer off Homer Bailey put the Brewers up 3-2 in the sixth. Jesus Aguilar singled to open the inning and Shaw followed with his 25th homer, lining an 0-f2 pitch into the right-field seats.

Anderson, pitching on seven days' rest, entered tied for the N.L. lead with 24 homers allowed and gave up second-inning solo shots to Eugenio Suarez and Phillip Ervin as the Reds took a 2-0 lead. Anderson then retired the final 14 hitters he faced.

Anderson (8-7) allowed two hits in six innings, with six strikeouts and no walks. Josh Hader retired six straight, striking out three, and Jeremy Jeffress pitched the ninth for his fifth save.

Bailey (1-11) kept the Brewers off the scoreboard until Yelich's 20th homer, a one-out solo shot in the fifth that made it 2-1. Bailey, who has not won since May 12, allowed three runs on five hits in six innings, striking out five and walking one.

The Brewers added two runs in the eighth on a pinch-hit RBI triple by Keon Broxton and Manny Pina's sacrifice fly.

Suarez opened the second with his 28th homer, sending a 1-1 pitch over the wall in left-center. One out later, Ervin drove a 1-0 pitch to left for his fourth.

Lorenzo Cain beat out an infield single to short with one out in the seventh The Reds challenged, but the call was upheld after a review estimated at 1 minute, 40 seconds.

Brewers: RHP Matt Albers, on the 10-day DL (left hamstring strain), is back with team and could be activated soon. He pitched three scoreless rehab outings with Double-A Biloxi, including one Saturday. “He's ready. We weren't planning on activating him today unless there was a need,” manager Craig Counsell said. “We'll kind of go with that for the next couple of days, depending on need. ... RHP Joakim Soria, also on the DL (right groin), will pitch off the mound on Tuesday and face hitters.