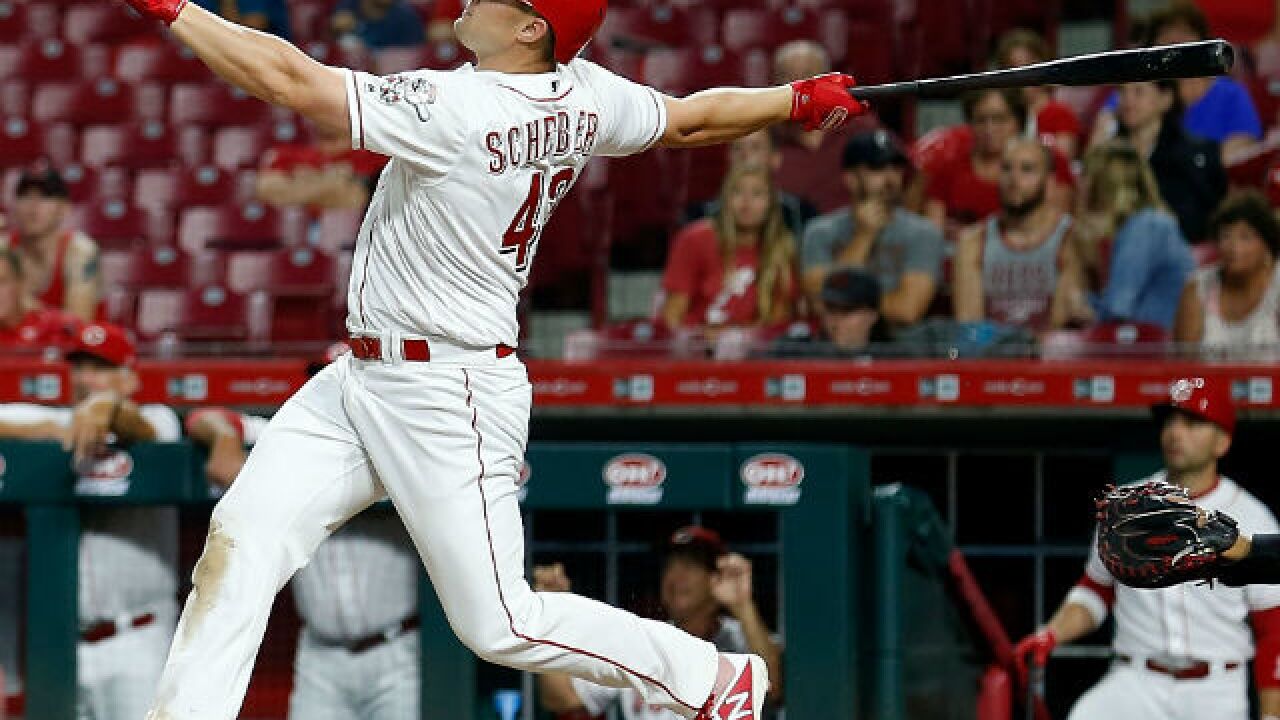 Image copyright 2018 Getty Images. All rights reserved. This material may not be published, broadcast, rewritten, or redistributed.
<p>CINCINNATI, OH - SEPTEMBER 7: Scott Schebler #43 of the Cincinnati Reds hits a grand slam off of a pitch by Rowan Wick #40 of the San Diego Padres during the sixth inning of the game at Great American Ball Park on September 7, 2018 in Cincinnati, Ohio. (Photo by Kirk Irwin/Getty Images)</p>

CINCINNATI — The Reds tied their club record for grand slams on July 1 and figured it wouldn't be long before someone got the next one. They waited more than two months before Scott Schebler hit No. 10.

Schebler hit the grand slam that set a Reds season record, and Phillip Ervin homered twice as Cincinnati pulled away to a rain-delayed 12-6 victory over the San Diego Padres early Saturday.

Schebler connected off Rowan Wick in the sixth for Cincinnati's 10th grand slam, putting the Reds up 10-4 and ending the long wait. Every time a Reds batter came up with the bases loaded at Great American Ball Park, the statistic flashed on the scoreboard.

"We've been looking at that on the scoreboard for, what, a couple months now," Schebler said. "It was really cool. It's all about the guys getting on base."

Ervin had a solo homer and a two-run shot, the first multi-homer game of his career.

The start of the game was delayed by 2 hours, 37 minutes because of rain and ended at 12:09 a.m. Both starters made quick exits.

Kennedy threw 44 pitches in his short outing, only 20 of them for strikes.

"That second inning, I just kind of lost it mechanically," Kennedy said. "No excuses. It's something I really haven't dealt with before."

Ervin brought home another run in the sixth with his squeeze bunt, one of two bunts botched by San Diego in the inning. Reliever Michael Lorenzen (3-1) also reached on a bunt single that the Padres couldn't field — Wick was slow getting off the mound — loading the bases for Schebler's second career grand slam.

"It's a tough, tough lesson for him today that little bunts can lead to big innings," manager Andy Green said.

Mejia made his first start behind the plate for the Padres on Thursday night and hit a three-run shot for a 6-2 victory, earning another start. Manager Andy Green plans to split catching duties the rest of the month, giving Mejia a chance to learn the pitching staff while getting acclimated.

The Reds' 10 grand slams have been hit by Adam Duvall (2), Scooter Gennett, Eugenio Suárez, Joey Votto, Jesse Winker, DeSclafani, Lorenzen, Peraza and Schebler. The only other major league team with at least nine different players hitting a grand slam in a season was the 2000 Cardinals, who had 10 players connect, according to STATS.

Peraza's bases-loaded double ended Strahm's streak of not allowing a hit with two outs and runners in scoring position. Batters had been 0 for 14 against the left-hander.

Interim manager Jim Riggleman has removed Homer Bailey from the rotation for the rest of the season, giving rookie Tyler Mahle a chance to start. Bailey is 1-14 with a 6.09 ERA and has lost nine straight decisions. Bailey won't pitch in relief, but will be confined to keeping in shape by throwing in the bullpen. The 32-year-old pitcher has been limited to 46 starts in the last four seasons because of three arm injuries that required surgery.

Reds: Gennett was back in the projected starting lineup after missing one game with a sore thigh. He went 0 for 5.