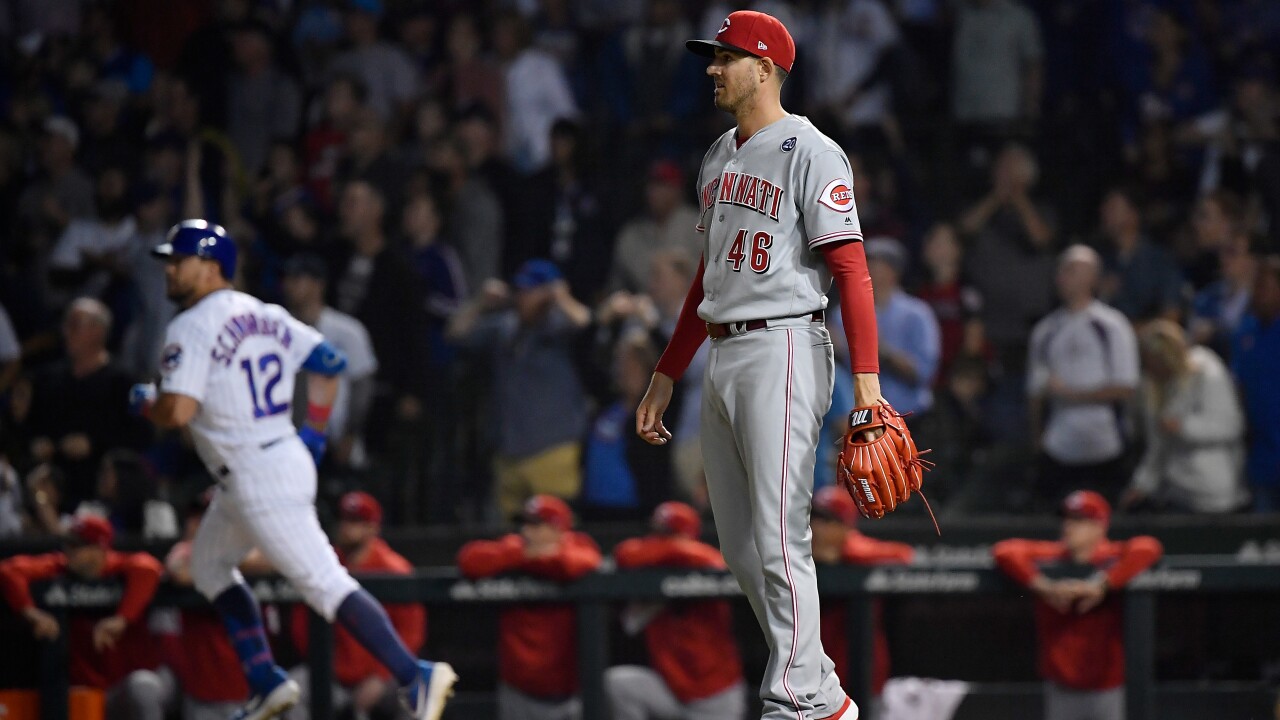 Schwarber hit a three-run homer and made a diving catch in left field, and the Cubs beat the Cincinnati Reds 8-2 on Monday night for their fifth straight victory.

Castellanos added a two-run double in the eighth inning as Chicago moved a season-high 14 games above .500. The Cubs have outscored opponents 59-18 during their streak.

"This is the time," Castellanos said. "We're facing adversity and we've got to stare it down. There's a lot of guys in this room who've got to step up."

The Cubs (82-68) pulled within a half-game of Washington for the top spot in the wild-card standings and stayed two games back of NL Central-leading St. Louis, which held off the Nationals for a 4-2 win.

It was Mills' first major league win in his 17th big league appearance.

"Every time he shows up, he does something good for us," manager Joe Maddon said, "and he does it in a very quiet, professional manner. He's outstanding."

It was Chicago's first game since Rizzo had an MRI that showed the big first baseman had a moderate lateral right ankle sprain sustained during Sunday's 16-6 victory over Pittsburgh.

Rizzo will wear a walking boot for five to seven days, casting doubt on his availability for the rest of the season.

"We're not shutting any doors, but we're realistic that this is a legitimate injury that under ideal circumstances would take some time to heal," president of baseball operations Theo Epstein said.

Cincinnati (70-81) had won three of four, but the Reds went 1 for 9 with runners in scoring position and left 11 runners on base.

"We had opportunities early and didn't get enough out of those," manager David Bell said. "It turns out that was kind of the difference."

Kevin Gausman (3-9) pitched two innings in his first start since the Reds claimed him off waivers from the Braves last month. The right-hander has been a starter for most of his career, and Bell wanted to give him another look in that spot while giving the rest of his rotation an extra day of rest.

Gausman got into trouble in the first when Chicago put runners on first and second with one out. Schwarber then connected for the second straight day, driving a 2-2 pitch deep to center.

"I kind of put my team in a hole right there," Gausman said.

It was No. 37 for Schwarber, the highest total for a lefty batter for the Cubs since Hall of Famer Billy Williams hit 37 in 1972.

Schwarber also robbed pinch hitter Derek Dietrich with a stellar grab on his liner to left in the fourth. Phillip Ervin's sacrifice fly cut Chicago's lead to 3-2, but Cishek struck out Eugenio Suárez looking to end the inning.

Reds infielder Josh VanMeter left in the fourth inning because of a family medical issue. He started at first base after Joey Votto was scratched with an illness.

The Reds promoted infielder Christian Colón from Triple-A Louisville. Colón was hit by a pitch while batting for Gausman in the third and scored on Curt Casali's bases-loaded walk. It was Colón's first major league appearance since June 20, 2017, for Miami against Washington.

RHP Sonny Gray (10-7, 2.80 ERA) faces RHP Yu Darvish (6-6, 3.97 ERA) on Tuesday night in a matchup of two of baseball's best pitchers since the All-Star break. Gray is 4-1 with a 1.29 ERA in his last eight starts for Cincinnati. Darvish struck out 14 while pitching six scoreless innings in Chicago's 4-1 victory at San Diego on Thursday.