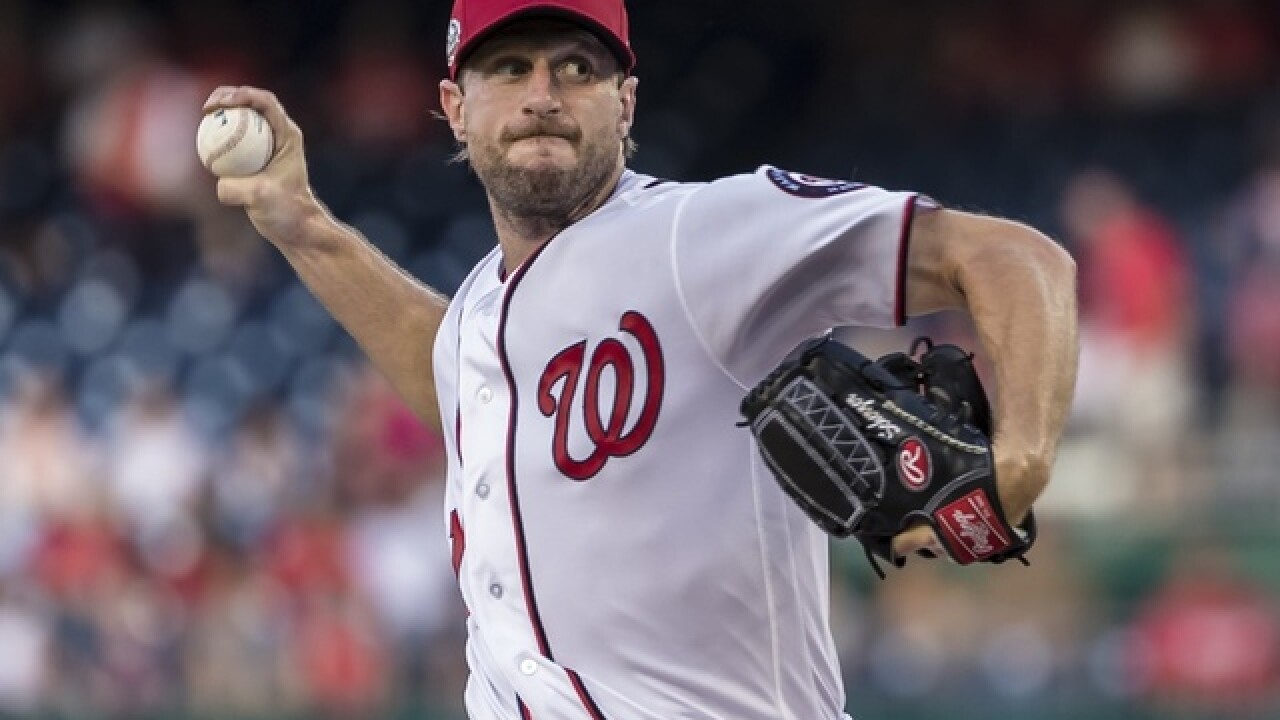 Copyright 2018 Scripps Media, Inc. All rights reserved. This material may not be published, broadcast, rewritten, or redistributed.
Scott Taetsch
<p>WASHINGTON, DC - AUGUST 02: Max Scherzer #31 of the Washington Nationals pitches against the Cincinnati Reds during the first inning at Nationals Park on August 02, 2018 in Washington, DC. (Photo by Scott Taetsch/Getty Images)</p>

WASHINGTON (AP) -- Max Scherzer struck out 10 in six innings for his fifth win in as many starts, helping the Washington Nationals to a 10-4 victory over the Cincinnati Reds on Thursday night.

Scherzer (15-5) also singled in a run off Tyler Mahle (7-9) during a six-run second inning as the Nationals won their third straight and moved two games above .500 for the first time since July 7.

Washington slugger Bryce Harper hit his 26th homer of the season, a blast into the second deck in right-center in the eighth.

Trea Turner connected for his 14th homer in the same inning and finished with four RBIs for the third-place Nationals, who remained five games back of Philadelphia and 4½ behind Atlanta in the NL East.

Cincinnati's Eugenio Suarez belted his 25th homer, the only major blemish for Scherzer, who allowed four hits and two walks.

Mahle failed to make it through the second inning for a second consecutive start. Going back four starts, the rookie right-hander has managed only 10 2/3 innings while watching his ERA jump more than a full run to 4.95.

It was 1-0 before Mahle allowed Scherzer's one-out single to score Juan Soto.

Two batters later, Scherzer darted home from second on Turner's two-run single. Mahle departed two batters after that when after he walked Harper with the bases loaded to make it 5-0.

Keury Mella entered and promptly walked Soto to force another run across before Matt Adams' flyout ended the inning.

Scherzer returned mound in the third having thrown only 25 pitches. In the fourth, he faced seven batters including Suarez, who launched a shot that cleared the visitors' bullpen in left.

Two innings later, Suarez flew out to center. Scherzer fanned Preston Tucker with his 110th and final pitch, a 90-mph cutter, reaching double digits in strikeouts for the 11th time in 23 starts this season.

Reds interim manager Jim Riggleman managed at Nationals Park for the first time since resigning from Washington's top post in June 2011, when the team declined to pick up his contract option for 2012. He had taken over the job in July 2009.

"It wasn't a smart decision, career-wise," Riggleman said Thursday. "But I felt like it was the right decision. That never changed."

Reds: Mella got his first big league action of the season after his recall from Triple-A Louisville on Friday. He had not pitched at any level since July 22. "I have to get him in a game or we have to get him out and pitch at Triple-A," Riggleman said before the game.