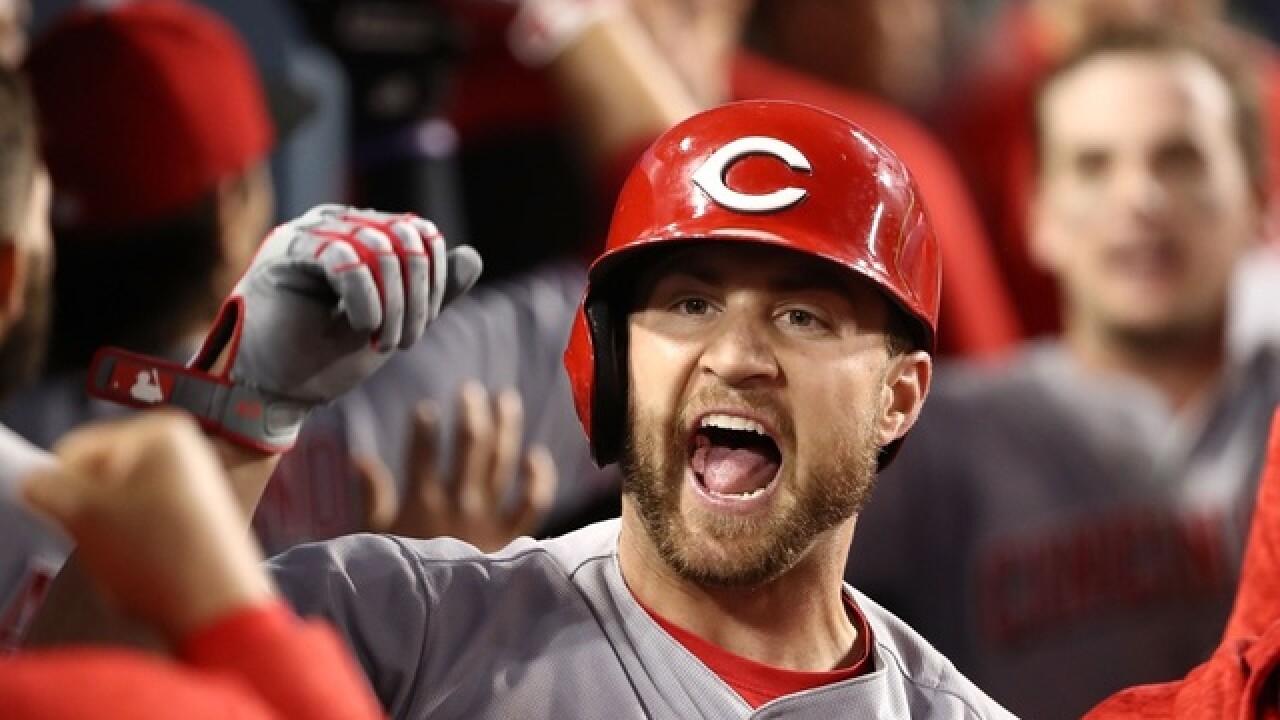 Image copyright 2018 Getty Images. All rights reserved. This material may not be published, broadcast, rewritten, or redistributed.
Victor Decolongon/Getty Images
<p>LOS ANGELES, CA - MAY 12: Scott Schebler #43 of the Cincinnati Reds celebrates with teammates in the dugout after hitting a three-run homerun to take a 4-3 lead in the sixth inning of the MLB game against the Los Angeles Dodgers at Dodger Stadium on May 12, 2018 in Los Angeles, California. The Reds defeated the Dodgers 5-3.</p>

LOS ANGELES -- Scott Schebler began his career with the Dodgers and loved his time with the franchise. Now in his third season with Cincinnati, he admitted his big homer back in Los Angeles had some extra special meaning.

Schebler hit a three-run home run in the four-run sixth inning to lead the Reds to a 5-3 win over the Dodgers on Saturday night.

"I'm happy with where I am. Don't mistake that. I'm very happy, but it always feels good to kind of prove yourself ... it does feel a little extra (nice) to do it against a team you once played for."

The Reds (13-27) have won five consecutive games, and won the series.

Schebler hit the home run to left field off Dodgers reliever J.T. Chargois. It was Schebler's fourth of the season and first since April 28. Chargois had relieved starter Ross Stripling. Chargois allowed a single to Scooter Gennett, the first batter he faced, then gave up the home run.

"Honestly, I didn't think it was (going out)," Schebler said. "I've played here enough to know that when the marine layer comes in then you've really got to catch one. ... I saw Joc (Pederson) keep going back and I thought, 'Oh man, keep going, keep going.' Once I saw him jump against the fence and the ball jump up I was pretty relieved for sure."

Chargois gave way to ambidextrous reliever Pat Venditte, who was called up earlier in the day from Triple-A Oklahoma City. He pitched in his first major league game since 2016 when he was with Seattle. Venditte, who pitched both lefty and righty against the Reds, allowed a hit and struck out one while getting four outs.

Stripling had struck out a career-high seven batters and allowed just two runs in 5 1/3 innings. Stripling started the season in the bullpen and was pulled after 79 pitches.

The Dodgers have lost three consecutive games and six of their last seven.

"We can't get out of our own way a little bit," Stripling said. "This is definitely a tough one. None of them have been easy to swallow but this one definitely hurts."

The Reds are the National League Central's worst team, but have found a groove on the road.

Cody Bellinger hit a solo home run against Homer Bailey in the third inning to give the Dodgers a 1-0 lead. It was Bellinger's first home run since May 1 and second in the last 20 games.

The Dodgers added to that lead in the fourth inning when Pederson's single scored Austin Barnes.

Los Angeles finished with 12 hits but left 11 men on base. The Dodgers' Max Muncy had two hits for the second straight night.

Jesse Winkler hit a run-scoring single to right field to get the Reds on the board in the fifth inning. And in the sixth, the Reds took the lead on Schebler's home run.

Bailey (1-5) allowed three runs on 10 hits but was able to work his way out of jams for his first win of the season. The Reds lost in all of Bailey's previous eight starts.

"I'm not going to say I played very well but our offense and bullpen did what they've been doing all year, just outstanding," Bailey said. "It was a good team effort for us to pick up this win and the series."

Reliever Jared Hughes earned the save, his first of the season.

Reds: INF Scooter Gennett (shoulder) is playing but not at 100 percent and homered in his four previous games. Still, Riggleman said he will try to to find an off day here or there so he can rest his shoulder.

Dodgers: INF Justin Turner (fractured wrist) played third base in a rehab game Saturday at Single-A Rancho Cucamonga and was 0-for-3. Turner could play his first game of the season with the Dodgers on the upcoming roadtrip to Miami and Washington ... INF Logan Forsythe (right shoulder inflammation) was the designated hitter in a rehab assignment Saturday and was 1 for 4 with a double. He'll play second base Sunday and could join the Dodgers on their roadtrip starting Tuesday in Miami.

Reds: Luis Castillo (2-4, 6.47) will make his first career appearance against the Dodgers. He retired the first 14 batters he faced in the Reds' win against the Mets, which started the team's win streak.

Dodgers: LHP Rich Hill (1-1, 7.11) has struggled his last two starts, both against the Diamondbacks, allowing a combined 12 earned runs in nine innings.