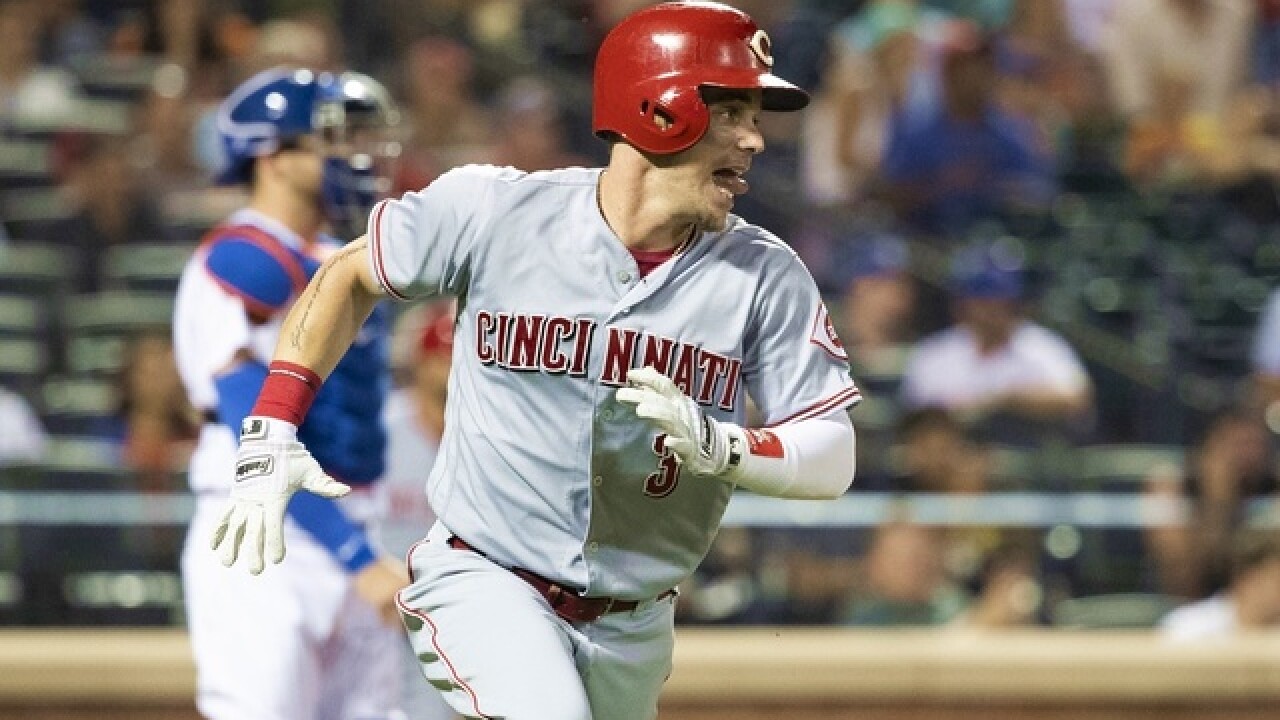 Image copyright 2018 Getty Images. All rights reserved. This material may not be published, broadcast, rewritten, or redistributed.
Michael Owens
<p>NEW YORK, NY - AUGUST 07: Scooter Gennett #3 of the Cincinnati Reds runs to first base after hitting a single bringing Jose Peraza #9 of the Cincinnati Reds home in the first inning against the New York Mets at Citi Field on August 7, 2018 in the Flushing neighborhood of the Queens borough of New York City. (Photo by Michael Owens/Getty Images)</p>

NEW YORK (AP) -- Sal Romano got the win in his New York homecoming, pitching into the seventh inning to lift the Cincinnati Reds over the Mets 6-1 on Tuesday night in a game delayed by rain for 1 hour, 40 minutes in the first inning.

Romano (7-9) was born in Syosset on nearby Long Island and grew up in Southington, Connecticut. He allowed a run, two hits and three walks while striking out five over six-plus innings to help the Reds snap a three-game skid.

The 24-year-old took the mound two hours later than anticipated but with a 3-0 lead thanks to a Reds outburst that bookended a thunderstorm. Mets starter Jason Vargas allowed hits to three of the four batters he faced, including Scooter Gennett, who laced an RBI single to give Cincinnati the lead shortly before players were waved off the field.

Romano left after walking the first two batters of the seventh and received a warm ovation from a group of fans wearing Reds gear behind the visiting dugout.

Ervin hit a two-run homer in the third, and former Mets prospect Dilson Herrera led off the ninth with a pinch-hit homer.

Vargas (2-8) took the loss after allowing three runs and three hits while recording one out.

A SCARE, AND A NOT-SO-SWEET SHORT START

Before the game was delayed at 7:20 p.m., one rumble of thunder was so loud that Mets shortstop Amed Rosario ducked before darting toward the third base line.

The rain made Vargas' 240th big league start his shortest. Prior to Tuesday, Vargas' briefest start was a one-inning outing for the Marlins on Oct. 1, 2005. He is the first Mets starter to record one out or fewer since Jonathon Niese got one out against the Cardinals before exiting due to a knee injury on Aug. 23, 2016.

Reds: 1B Joey Votto (right knee) and OF Preston Tucker (toe) did not play. Votto, who was hit by a pitch by the Nationals' Ryan Madson, sat for the second time in three games and just the ninth time since the start of the 2015 season. Interim manager Jim Riggleman said a disabled list stint is a possibility for Tucker, who was hit by Noah Syndergaard on Monday.

Mets: OF Jay Bruce (right hip), who has been on the disabled list since June 19, is participating in baseball activities and getting closer to a rehab assignment. ... LHP Steven Matz (flexor pronator strain) threw 15 pitches Monday but will miss at least one more start.

Reds: RHP Robert Stephenson (season debut) earned a promotion by going 11-6 with a 2.87 ERA and 135 strikeouts in 113 innings at Triple-A Louisville.