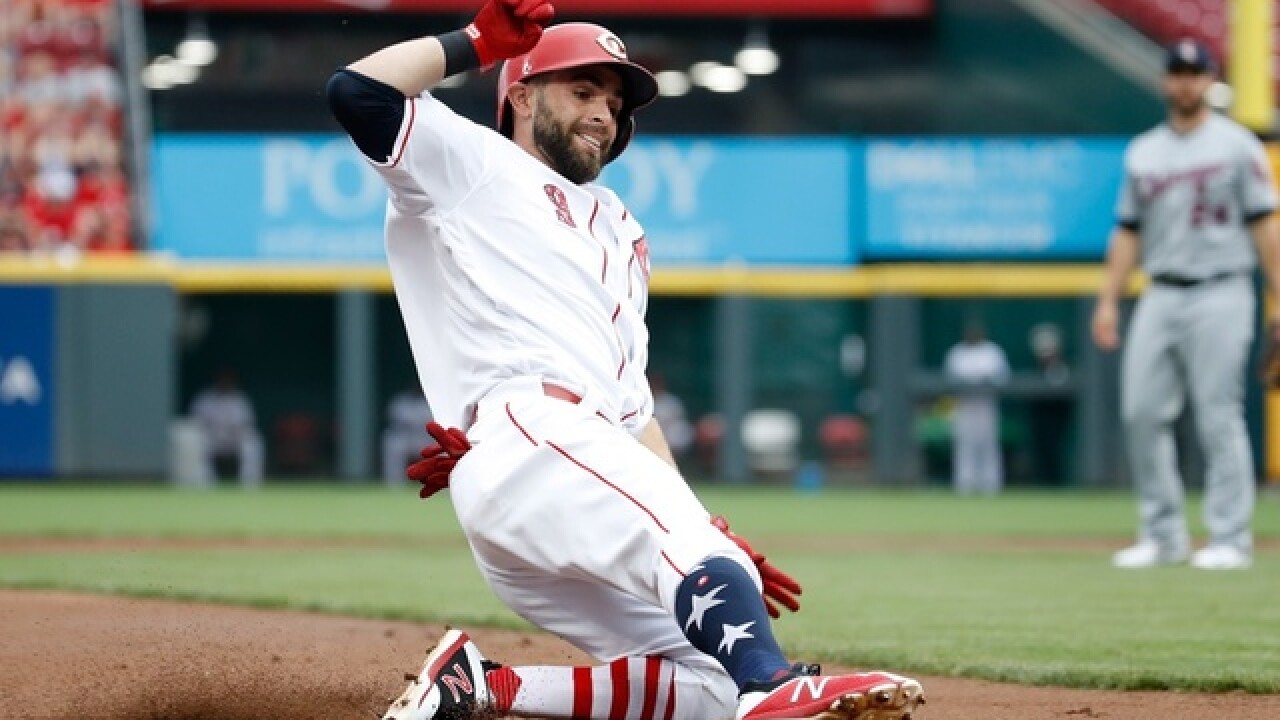 Image copyright 2018 Getty Images. All rights reserved. This material may not be published, broadcast, rewritten, or redistributed.
Andy Lyons
<p>CINCINNATI, OH - JULY 03: Jose Peraza #9 of the Cincinnati Reds slides into third base for a tripple in the first inning against the Chicago White Sox at Great American Ball Park on July 3, 2018 in Cincinnati, Ohio. (Photo by Andy Lyons/Getty Images)</p>

CINCINNATI (AP) -- Fitting for Independence Day, the Cincinnati Reds saved all their fireworks for the fourth.

"It was nice to be able to contribute with the bat," said Romano, who was hitting .038 going into the game. "The first thought when I saw the signal, I thought the number one thing was get the ball down wherever the pitch was. I was excited. I have never done it before. It was definitely a big insurance run and got the out of the game."

Jesse Winker and Jose Peraza each had a two-run single during the big inning, and Scooter Gennett also singled in a run. The Reds overcame Daniel Palka's third home run in two games to win the three-game series and complete a 4-3 homestand before a crowd of 24,442, which stayed for a postgame fireworks show.

The Reds have won 13 of 17 and have come from behind in eight of their last 11 wins.

Yoan Moncada added a two-run homer for the White Sox, who have dropped five of seven and 14 of 20.

Romano (5-8) struck out six and allowing six hits and four runs in five innings. His bunt back to the mound brought home Adam Duvall for the final run of Cincinnati's breakout fourth inning.

Reds relievers Amir Garrett and Michael Lorenzen teamed up for 2 1/3 scoreless innings before Jared Hughes celebrated his 33rd birthday by pitching the final 1 2/3 for his sixth save.

Dylan Covey retired his first nine batters before the Reds erupted for five hits and six runs while sending 10 batters to the plate in the fourth. Winker and Peraza each had a two-run single before Romano's bunt knocked Covey (3-4) out of the game. Covey allowed a walk, struck out two and hit a batter in 3 2/3 innings.

"I was trying to get ground balls, but I was leaving my pitches elevated," Covey said. "I tried to make adjustments. That's not my game, I've got to keep the ball down."

"Their guy was shutting us down pretty good," Reds interim manager Jim Riggleman said. "We saw some things from him better the second time around. We put together some good at-bats."

Moncada, whose 12th-inning bases-loaded triple broke open Chicago's 12-3 win Tuesday, gave the White Sox a 2-0 lead with a two-out, two-run homer in the third. Palka went deep for a 3-0 lead in the fourth.

The Reds added a run in the eighth on pitcher Chris Volstad's bases-loaded throwing error.

The Reds sent nine or more batters to the plate in one inning in five of the seven games on the just-completed homestand.

Billy Hamilton, who entered the game as a pinch-runner in the sixth and stayed in to play center field, threw out Jose Abreu at the plate trying to score from second to end the eighth - Hamilton's eighth assist of the season, tying Cubs left fielder Kyle Schwarber for the NL lead among outfielders.

A 10-day, nine-game road trip and the All-Star break will keep the Reds away from Cincinnati until July 20.

White Sox: Abreu returned to Chicago's lineup after leaving Monday's game and missing Tuesday's with a bruised left ankle from a foul ball.

Reds: Gennett reported no problems from having his left hand bent back while trying to make a catch on Adam Engel's bunt Tuesday.

White Sox: LHP Carlos Rodon (1-3) faces the Astros on Thursday. He is 1-0 with a 1.71 ERA in four career starts against Houston.