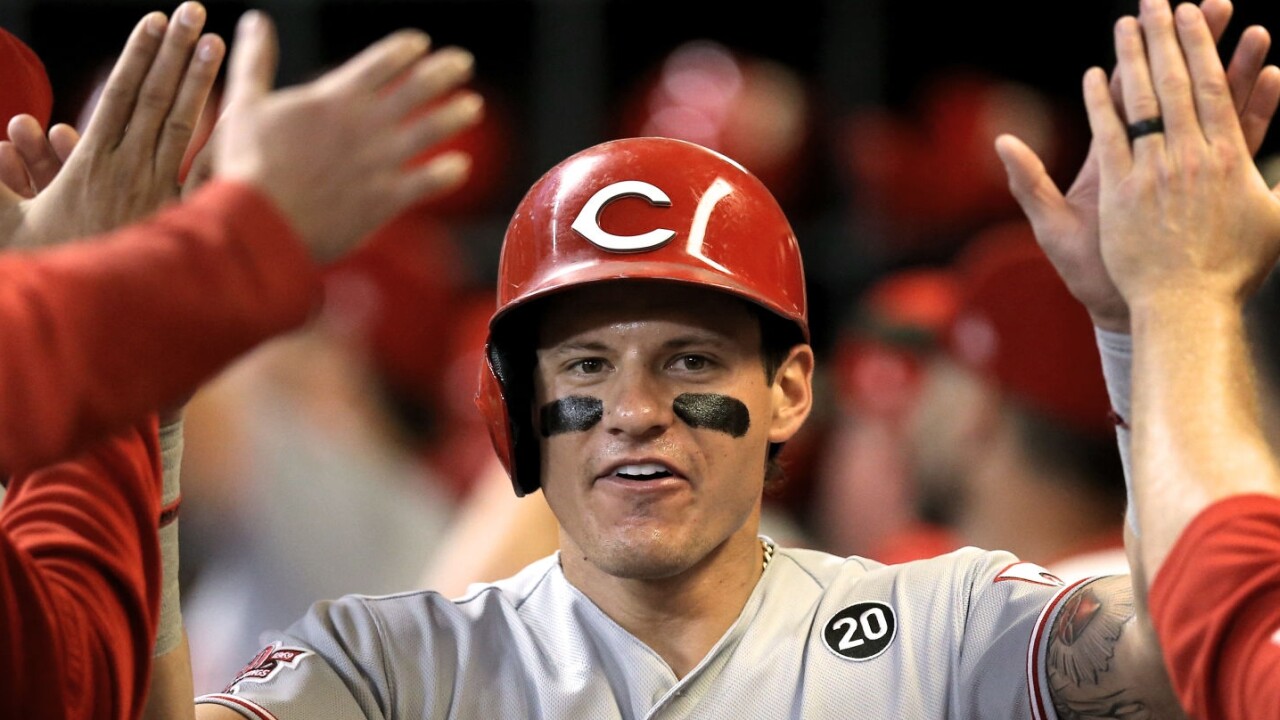 Dylan Buell
MILWAUKEE, WISCONSIN - JUNE 21: Derek Dietrich #22 of the Cincinnati Reds celebrates with teammates after scoring a run in the third inning against the Milwaukee Brewers at Miller Park on June 21, 2019 in Milwaukee, Wisconsin.

Dietrich was hit by a pitch three times and walked, scoring each time, and the Reds withstood another homer from major league leader Christian Yelich, beating the Milwaukee Brewers 11-7 on Friday night and extending their winning streak to a season-high six games.

"Dietrich, I don't know how to explain that," Reds manager David Bell said. "I've seen other guys have that, I don't know if it's an ability or inability to get out of the way or whatever, knack, but that was actually a big part of the game."

Yelich hit a two-run homer in the fifth, his third in three games, and extended his hitting streak to a career-high 18 games. He has 29 homers this season, tying him with Prince Fielder in 2007 for the most in franchise history before the All-Star break.

Cincinnati scored three runs in the first with just one hit and led 6-1 before Yelich and Mike Moustakas homered off starter Sonny Gray in the fifth to make it 6-4, but the Brewers did not get closer and lost their fifth straight.

"So many things happened in that game, the bottom line is our offense was really good," Bell said. "Great at-bats all night, big hits, big home runs. That was really the story of the game."

Cincinnati scored three times in the seventh, and Yasiel Puig made it 11-4 in the eighth with his 15th homer, a two-run shot to center. Milwaukee got three runs in the eighth but left the bases loaded.

Dietrich, who also was hit twice in Thursday's game, has been hit a major league high 14 times this season, and the Brewers questioned whether he was leaning into pitches.

"It's the umpire's judgment if he is intentionally putting himself in the way of the ball," Brewers manager Craig Counsell said. "But he's done that. That's what he does. He gets hit a lot."

In the first inning, Joey Votto drew a one-out walk and Anderson then hit Eugenio Suárez and Dietrich to load the bases. Puig walked to force in a run and José Iglesias dropped a two-run single into shallow center.

"It was just too many free passes," Counsell said. "A softly hit ball ends up being that kind of back breaker of the inning and we're three down to start the game. Just not crisp execution at the start, and then you catch a bad break and then you're down in the hole right away."

José Peraza's two-run triple made it 5-0 in the third.

Eric Thames singled in a run in the bottom half for Milwaukee, but Nick Senzel answered in the fourth a solo homer, his eighth.

Dietrich is the first Reds player in the modern era (since 1900) to be hit by a pitch three times in one game, according to the Elias Sports Bureau. That also ties the major league record. While he was with the Marlins from 2013-18, Dietrich was hit a franchise record 93 times and the second-most in the majors over those six seasons, behind Anthony Rizzo of the Cubs (111).

"He makes the game look like a video game," Anderson said of Yelich. "Like you're playing on your Xbox, you push X, home run. You push X, triple. The guy, it's just something special to watch. To have a guy in your offense like that, it's definitely nice. As a starting pitcher, our goal is to keep runs off the board so that guy can put runs on the board."

Reds: OF Senzel, who singled and homered, left in the bottom of the fourth with a headache.

Brewers: LHP Gio Gonzalez (left arm fatigue) threw a bullpen session Friday, but is not a candidate to replace struggling RHP Jimmy Nelson (0-2, 9.75 ERA) in the rotation. "We're still a ways off with Gio in my eyes," manager Craig Counsell said. "We have some progressions to make with Gio that take us, in our eyes, right before the All-Star break."