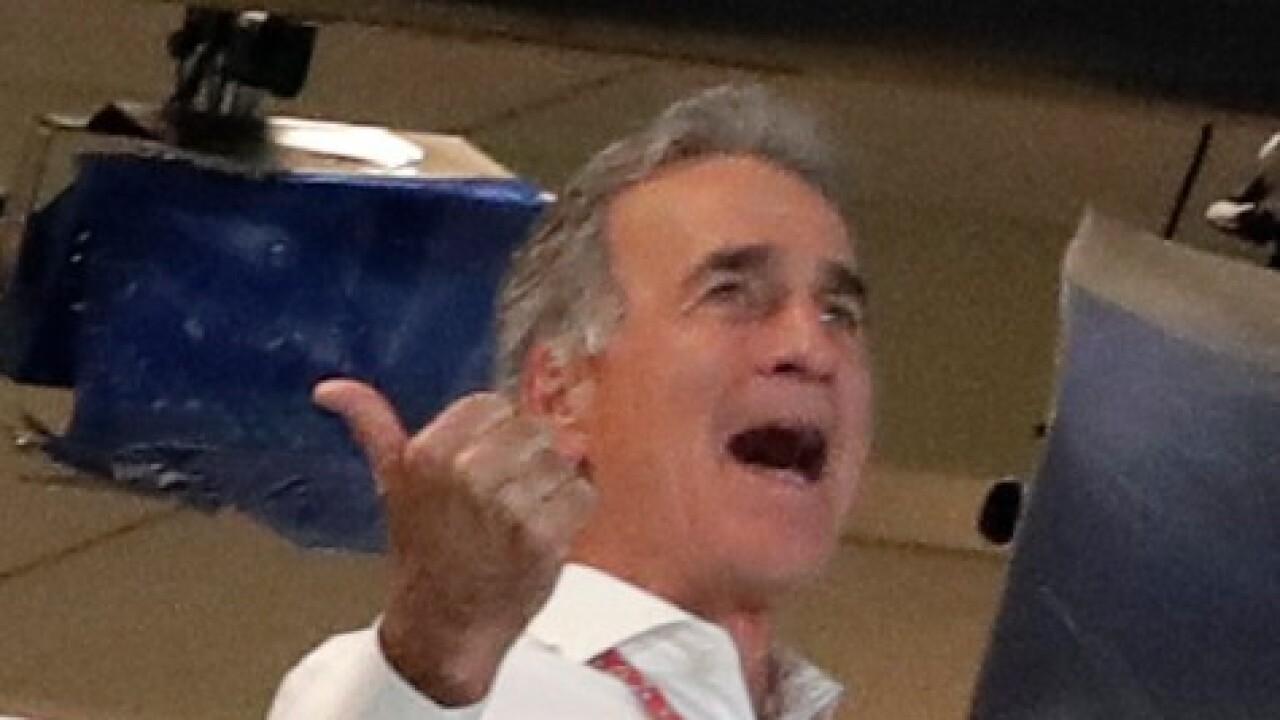 (Copyright 2020 The Associated Press. All rights reserved. This material may not be published, broadcast, rewritten or redistributed.)
AP Photo/Ted S. Warren
Reds TV broadcaster Chris Welsh is photographed in the TV booth during a game in Seattle on Sept. 10, 2019.

“You're a good man, partner. Hang in there,” Welsh said.

Last season, it was Brennaman commiserating with Welsh after Welsh was accused of racial undertones in negative comments about Braves star Ozzie Albies. Welsh suggested on the air that Albies, then 22, was a poor, dumb kid from Venezuela, and that could have been why he signed what was generally regarded as a low-ball contract extension.

Many Reds fans may not remember that Wednesday night episode on April 24, 2019 at Great American Ball Park. The Reds were already struggling at 9-13 and destined for another lousy season. Attendance was just 12,949, and the TV audience couldn’t have been much bigger.

Welsh, a former Reds pitcher, picked that moment to comment on the seven-year, $35 million extension Albies signed two weeks earlier. Some baseball insiders said Albies was worth twice that much or more.

“He came from a very poor background,” Welsh said on the air. “He’s from Curaçao, and if somebody offered you $35 million… I mean, he might not know the difference between $35 million and $85 million.”

Welsh went on with his rude assumption, neglecting the fact that Albies is smart enough to speak four languages.

LISTEN to Welsh talk about Albies:

So, here's the full comments from the Cincinnati Reds broadcast about Ozzie Albies and the deal he took. pic.twitter.com/eSYMXMk7px

“You don’t know what really happened behind the scenes,” Welsh said. “Did the Braves bring his family up into the office and talk to them directly? Did they only go through the agent? Did he feel pressure from one side or the other to sign this deal or not? So it’s become kind of a lightning rod of a deal in baseball right now, because a lot of people look at it on the surface and say ‘Ozzie Albies is going to be a superstar player and has the chance to make $100 million or more in this game and this contract’s going to take him until he’s age 30. And if he’s 30 years old and the owners, when he is 30, treat the free agents like they did this year, those 30-year-olds and over, he may not have a lot more money than anyone else out there looking for a job.’”

Welsh also neglected to mention that Albies had already given two reasons publicly why he took that deal.

No. 1 was peace of mind and financial security for his family:

“I look at it as, it’s not just for money. Because I’m not playing for money. I’m playing for my career. And I took it because I want my family to be safe,” Albies said.

No. 2 was to continue to play with another young Braves star, 22-year-old Ronald Acuna Jr., and because he was committed to the Braves. A week before, the Braves gave Acuna an eight-year, $100 million extension:

"We’re more than best friends, we’re brothers. I love him,” Albies said of Acuna. “It wasn’t just because of him, because I love everybody on the team. And I love being where I’m at, being part of the Braves. I want to be a Brave for the rest of my life.”

“Plenty of theories about why Albies decided to lock himself into a below-market deal so early in his career have been floated, but none have been worse than Reds broadcaster Chris Welsh’s.” – Deadspin.

“Chris Welsh should very well think twice before speaking in the future, because he is currently getting killed for some comments he made … He may have meant something else, but it sounds like he believes Albies isn’t intelligent enough to grasp a $50 million gap in pay.” – Total Pro Sports.

“It’s not necessarily wrong to suggest that Albies might prefer to take a guaranteed smaller amount of money now rather than gamble that he’ll be healthy and able to cash in in free agency later, or even to point out that the money he did get here can make a difference for him and possibly his family. But ‘might not know the difference’ seems like a pretty insulting way to say that.” – Awful Announcing.

The next day, Welsh approached Albies in the Braves clubhouse and apologized, the Atlanta Journal-Constitution reported. “Albies accepted the apology and all parties are beyond the issue,” the newspaper said.

Welsh opened the pregame show with an apology:

"I used some words last night that are just not very good choices for words. In fact, they were uninformed and they were wrong," Welsh said. "And when I went back home later on last night and I looked at them online, it was embarrassing for me. I hardly slept at all. And it's been bothering me. So the first thing I did when I got to the ballpark today I went down to the Braves' clubhouse. I sought out Ozzie Albies. We had a conversation. I apologized to him and his family for the remarks that I made. I apologize to all of the viewers out there who watch Reds baseball. Not like me to say something like that. It's never happened before. Will not happen again. And we're ready to move on."

On the air, Brennaman spoke in Welsh’s defense.

"This is a good man right here. Well done. Well done,” Brennaman said. “And I know you meant that very much from the heart."

Welsh still has a job on Reds TV broadcasts. We're still waiting to see about Brennaman, who was officially suspended by the Reds Wednesday night.