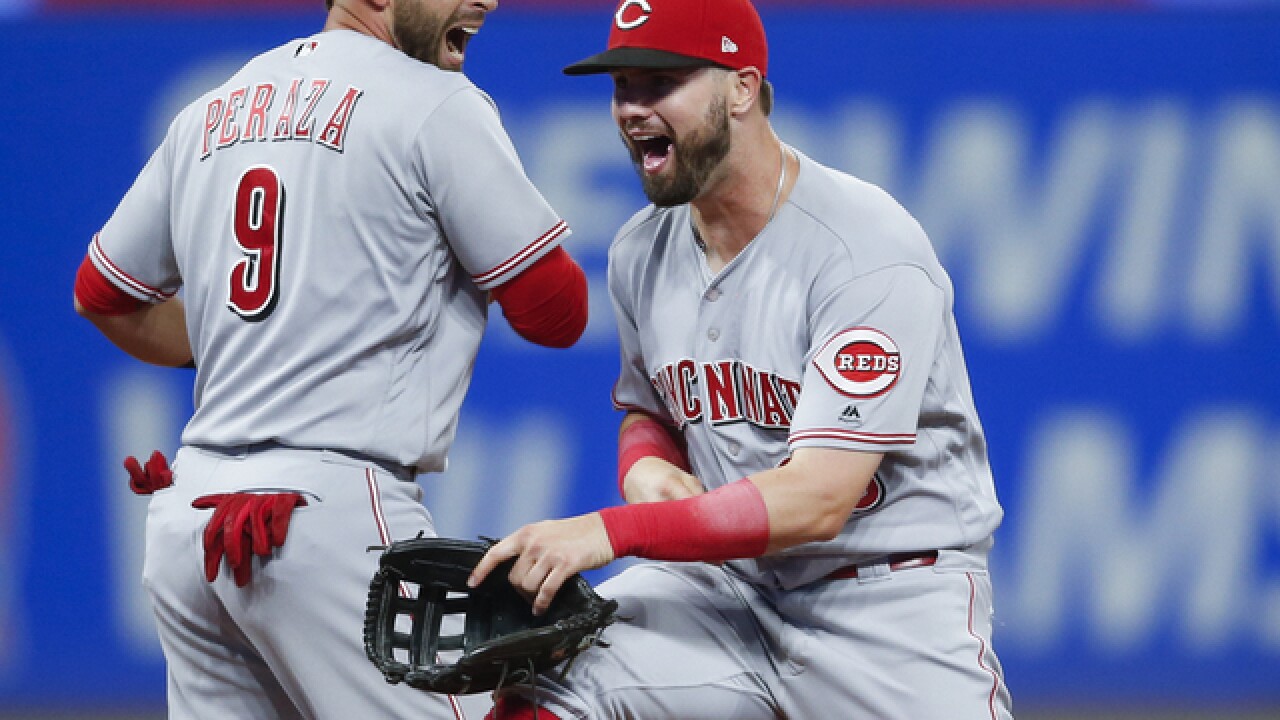 Image copyright 2018 Getty Images. All rights reserved. This material may not be published, broadcast, rewritten, or redistributed.
Ron Schwane
<p>CLEVELAND, OH - JULY 10: Jose Peraza #9 and Jesse Winker #33 of the Cincinnati Reds celebrate a 7-4 victory over the Cleveland Indians at Progressive Field on July 10, 2018 in Cleveland, Ohio. (Photo by Ron Schwane/Getty Images)</p>

The mixup was a miserable one for the AL Central leaders.

Joey Votto hit a go-ahead, three-run double off Otero in the ninth inning as Cincinnati scored seven times with two outs, overcoming a gem by Trevor Bauer to beat Cleveland 7-4 on Tuesday night.

Francona instructed Willis to have "O-P" warm up, referring to Oliver Perez, with the bases loaded and a 4-3 lead with closer Cody Allen struggling. Willis misunderstood the message, believing he had used Otero's nickname of "O-T."

"When I saw O-T coming through the gate, it's not that I don't think he can pitch, but it just wasn't the guy I was expecting," Francona said. "We had a communication (error). That one lands squarely on me, no getting around it. I know Carl is beating himself up right now, but that one lands on me."

Willis, who rejoined the staff this season, accepted responsibility for the mistake. He noted that Votto was 0 of 4 in his career against Otero, but said he should have asked Francona for clarification.

Allen (2-4) initiated the sequence by loading the bases after recording two outs in relief of Bauer, who struck out 12 in eight shutout innings. Cleveland's bullpen entered the day with the third-highest ERA in baseball at 5.13.

"Quite frankly, heart of hearts, I felt like Cody was going to get out of the situation," Willis said. "But you know, I made the mistake, got the wrong guy up. It's not that O-T can't get the job done, but it probably wasn't the best matchup."

Adam Duvall also doubled in a pair in the ninth, while Jose Peraza and Eugenio Suarez had RBI singles off Allen. Cincinnati's final seven batters reached base before Scooter Gennett ran into the third out on Suarez's hit.

"I take sole responsibility for everything that took place there," said Allen, who was charged with a career-high six runs. "We're confident in every guy that runs out of that gate and we shouldn't have been in that position in the first place."

Making his first start since being named to his first All-Star Game, Bauer only allowed three singles and didn't surrender a hit until Jesse Winker's one-out liner up the middle in the fifth.

The right-hander became the second major leaguer to post seven consecutive quality starts with eight-or-more strikeouts and no homers allowed, according to the Indians. Pedro Martinez holds the record with eight in 2002.

Former Cleveland reliever Kyle Crockett (1-0) netted the final two outs in the eighth after righty Sal Romano went the first 7 1/3 innings. Raisel Iglesias worked the ninth for his second save in two nights and his 19th of the season.

Francisco Lindor hit his fifth leadoff homer of the year and fellow All-Star Jose Ramirez had a solo shot for the Indians. Ramirez' home run was his 25th, marking the eighth time in franchise history the milestone has been reached in the first half of the season.

Reds interim manager Jim Riggleman earned his 700th career win, but was unaware of it until after the game. Cincinnati is 38-36 since he took over for Bryan Price on April 19.

"This is really an energetic, high-energy group, a fun-to-manage group," he said. "It was on display at its best right there. That's probably the best inning I've been involved in for a long time."

The four-run comeback in the ninth was the Reds' first since June 30, 2006 against the Indians.

RHP Homer Bailey (right knee) reported no physical issues after throwing two innings out of the bullpen Sunday in a rehab assignment with Triple-A Louisville.