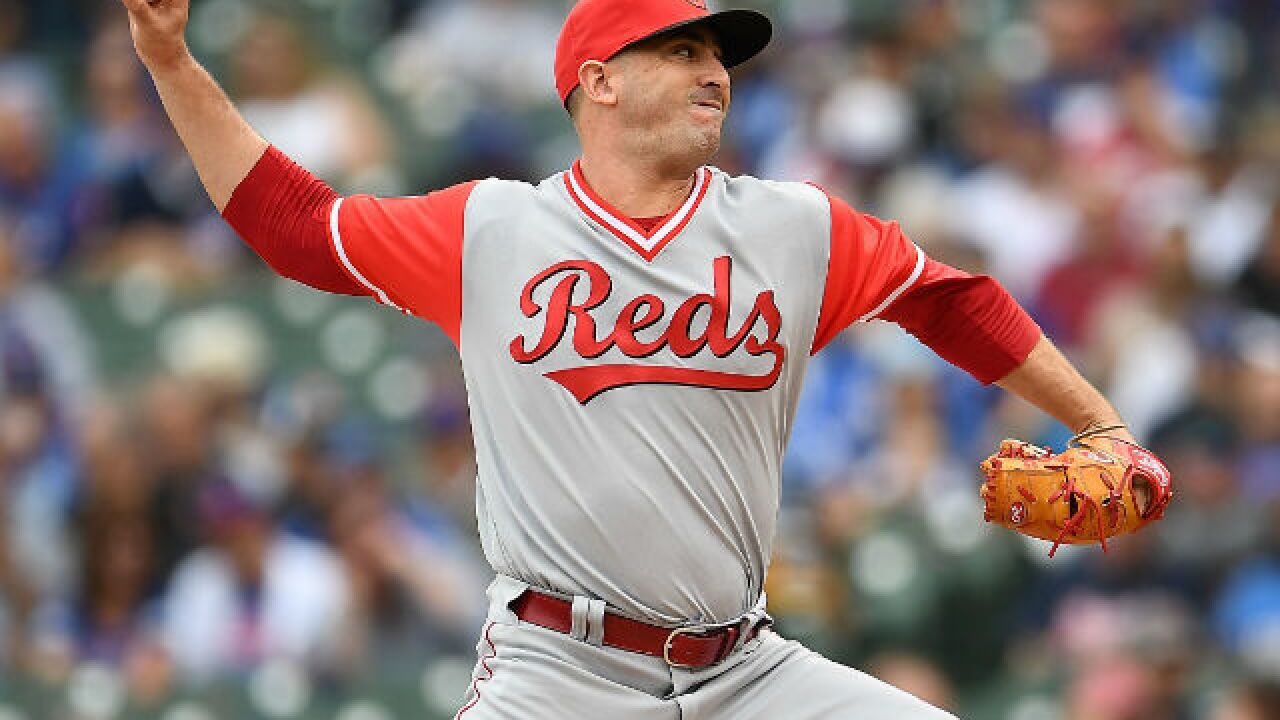 Image copyright 2018 Getty Images. All rights reserved. This material may not be published, broadcast, rewritten, or redistributed.
<p>CHICAGO, IL - AUGUST 24: Matt Harvey #32 of the Cincinnati Reds throws a pitch during the first inning against the Chicago Cubs at Wrigley Field on August 24, 2018 in Chicago, Illinois. (Photo by Stacy Revere/Getty Images)</p>

CHICAGO — Matt Harvey gave the Reds another strong start Friday, and it probably won't be the last now that they have decided not to trade him.

The last-place Reds say they're keeping Harvey for the rest of the season after turning down a waiver trade offer from the Brewers this week.

The veteran starter can't help them get a playoff spot, but he can point them in the right direction, said General Manager Nick Krall.

"We felt that it made more sense to keep Harvey and gain positive momentum for our club through the end of this season and into next season," Krall said in conference call. "He's been a quality influence on a lot of the guys on our club."

Jerry Crasnick, who covers baseball for ESPN and Baseball America, speculated that Reds owner Bob Castellini's fondness for Harvey was the reason the Reds didn't trade him.

I’m not sure if this was the deciding factor in the #Reds hanging onto Matt Harvey after the #Brewers claimed him. But word is that owner Bob Castellini “loves” Harvey, who has done a nice job of rehabilitating his image as a teammate in Cincinnati. Harvey is staying put.

Though it's unlikely Harvey will re-sign with the Reds after he becomes a free agent after the season, the right-hander said he was happy to stay in Cincinnati - for now.

"I didn't know what to expect," Harvey said. "There were some nerves, I guess, some different feelings coming through this morning. ... I'm glad I'm still staying here the rest of the season."

Whenever he had been asked about being traded to a contender, Harvey always said he wasn't asking for a trade and he enjoyed playing with the Reds.

Harvey has been one of the Reds' best pitchers since he was acquired from the Mets in May for catcher Devin Mesaraco. After a rough start, Harvey is 6-5 with a 4.28 ERA in 17 starts for Cincinnati.

The Brewers' offer apparently wasn't enough to entice them to make a deal with a division foe.

"He's really good. If you want something good, you have to give up something, you know?" Reds interim manager Jim Riggleman said. "Obviously, nobody wanted to give up enough. In their eyes, they probably felt it was enough. We certainly didn't think it was enough."

Iglesias (2-2) had made seven straight scoreless appearances. Jesse Chavez (4-2), the sixth Cubs reliever, pitched a scoreless inning for the win.

Daniel Murphy homered in the eighth for NL Central-leading Chicago, and Javier Baez had a run-scoring single in the sixth. Alec Mills pitched 5 2/3 innings of one-run ball in his first major league start.

Murphy's homer off Jared Hughes was his first as a Cub since he was acquired in a trade with Washington on Tuesday. It was just the third homer allowed by Hughes in 57 appearances this year.

The crowd of 37,760 roared as Murphy rounded the bases, and the veteran second baseman acknowledged the cheers by popping out of the dugout for a curtain call.

But Cincinnati responded with Suarez's leadoff drive on a 2-2 pitch from Pedro Strop. It was Suarez's 29th homer, extending his career high, and just the second blown save for Strop since closer Brandon Morrow was placed on the disabled list last month.

Cincinnati jumped in front on consecutive doubles by Mason Williams and Phillip Ervin leading off the second. It looked as if Williams had connected for his second homer, but a replay review showed the ball caromed off the front of a post holding up the basket in left-center.

Williams had to go back to second, but he scored anyway when Ervin followed with a liner into the gap in left-center.

Mills then retired his next 14 batters before Scooter Gennett reached on left fielder Kyle Schwarber's error with two out in the sixth. Mills was pulled after issuing a walk to Suarez, and Randy Rosario fanned Williams for the final out of the inning.

Reds: 1B Joey Votto (lower right leg) was scheduled for more work on Friday and Saturday. He could come off the disabled list on Sunday. "He's still not right. If we were going to try to activate him today, if he were due today, I wouldn't be comfortable doing it," manager Jim Riggleman said. "I'm getting more and more encouragement from him and the trainers."

Cubs: OF Jason Heyward rested for the second straight day. Manager Joe Maddon said his left ankle has been bothering him. "It's something he's been really fighting through for a bit," Maddon said. ... 3B Kris Bryant (left shoulder inflammation) hit in the cage. ... Morrow (right biceps inflammation) had an MRI on Thursday. "Everything's fine," Maddon said. "He's still in his process of getting back."

Reds right-hander Luis Castillo (7-10, 4.86 ERA) and Cubs left-hander Jose Quintana (10-9, 4.36 ERA) pitch on Saturday. Castillo is coming off a solid start against San Francisco, striking out nine in 6 2/3 innings in an 11-4 victory on Sunday. Quintana is winless in his last three starts, but he pitched four-hit ball into the sixth inning in a no-decision at Pittsburgh in his previous outing