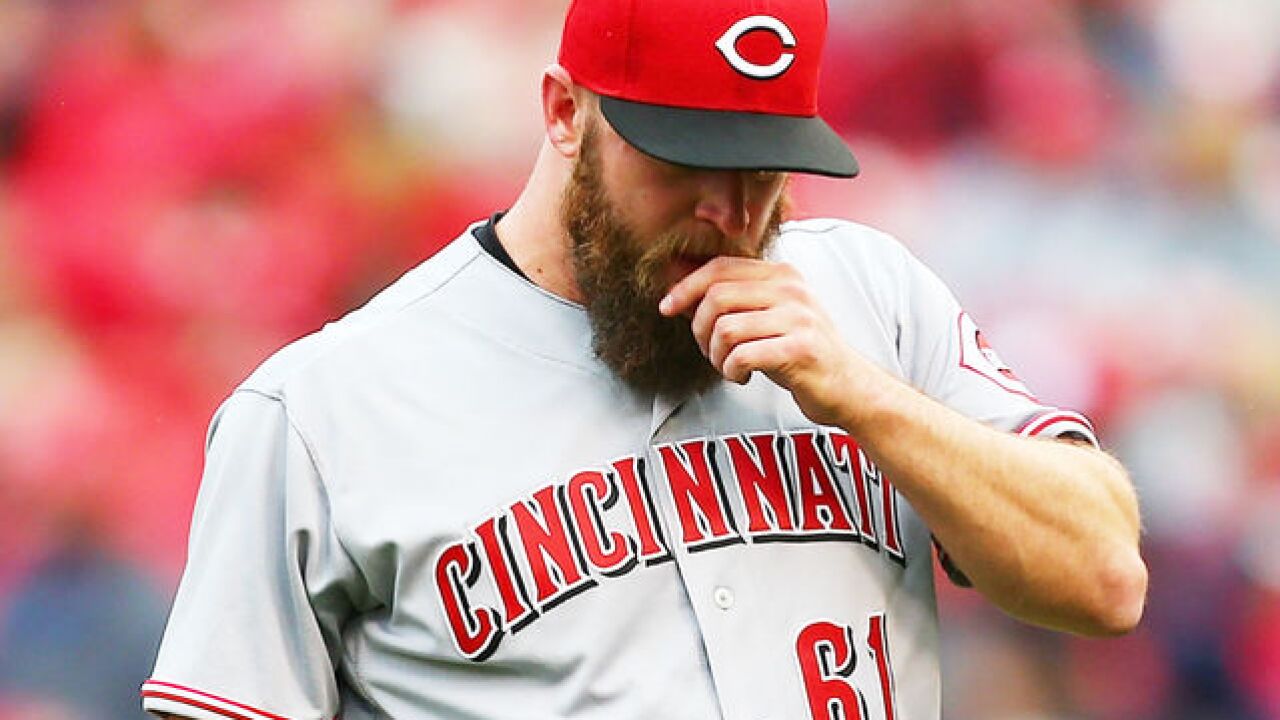 Image copyright 2018 Getty Images. All rights reserved. This material may not be published, broadcast, rewritten, or redistributed.
<p>ST. LOUIS, MO - APRIL 22: Kevin Quackenbush #61 of the Cincinnati Reds leaves the game in the eighth inning after allowing five runs in two innings against the St. Louis Cardinals at Busch Stadium on April 22, 2018 in St. Louis, Missouri. (Photo by Dilip Vishwanat/Getty Images)</p>

Nothing the Reds reliever tried worked as the Cardinals battered him for six runs Sunday afternoon and turned a close game into a 9-2 rout.

It was an historically bad performance befitting the worst start in Reds history (3-18).

St. Louis (13-8) swept the three-game series and handed the Reds their fifth straight loss and their third since Jim Riggleman replaced the fired Price as manager last week. The Cardinals have now beaten Reds 11 straight times since last season.

A two-run Reds rally in the sixth inning cut the Cardinals’ lead to 3-2, but then came Quackenbush's nightmare. He gave up a three-run homer to Paul DeJong in the seventh and three more runs in the eighth on Greg Garcia’s two-run double and Yadier Molina’s sacrifice fly.

"At the beginning of the first inning, I knew my command was not good enough," Castillo said. "When that happens, you've got to go out there and compete. And that's what I did for the rest of the game."

The Reds' anemic offense amounted to five hits off Miles Mikolas (3-0), with Jesse Winker’s double and Joey Votto’s infield single driving in the only runs. Mikolas went seven, struck out six and didn’t walk a batter. He was signed as a free agent on Dec. 5 after spending three seasons in the Japanese Central League.

The Reds have scored three runs or fewer in 15 of 21 games, but it's not for lack of effort, Riggleman said.

"I can promise you this, hitters, whether the results show or not, are giving you 100 percent when they step into the batter's box," Riggleman said. "Their focus is going to be there. It's just not happening right now."

Cardinals: RHP Adam Wainwright was placed on the 10-day disabled list on Sunday with right elbow inflammation. RHP John Brebbia was recalled from Triple-A Memphis. Brebbia made two appearances earlier in the season and did not allow a run in two innings. ... OF Tommy Pham missed his third game in four days with a right groin strain. He is day-to-day.

Reds: RHP Sal Romero (0-2, 5.75 ERA) will face RHP Brandon McCarthy (3-0, 2.91) on Monday in the first of a four-game home series against Atlanta. Romero will be making his fifth start of the season.

Cardinals: St. Louis is undecided on a starter for Tuesday's game against the Mets because of Wainwright's injury. RHP Zack Wheeler (1-1, 2.77) will start the first of the three-game series for the Mets.