Reds rally once but can't repeat magic in ninth 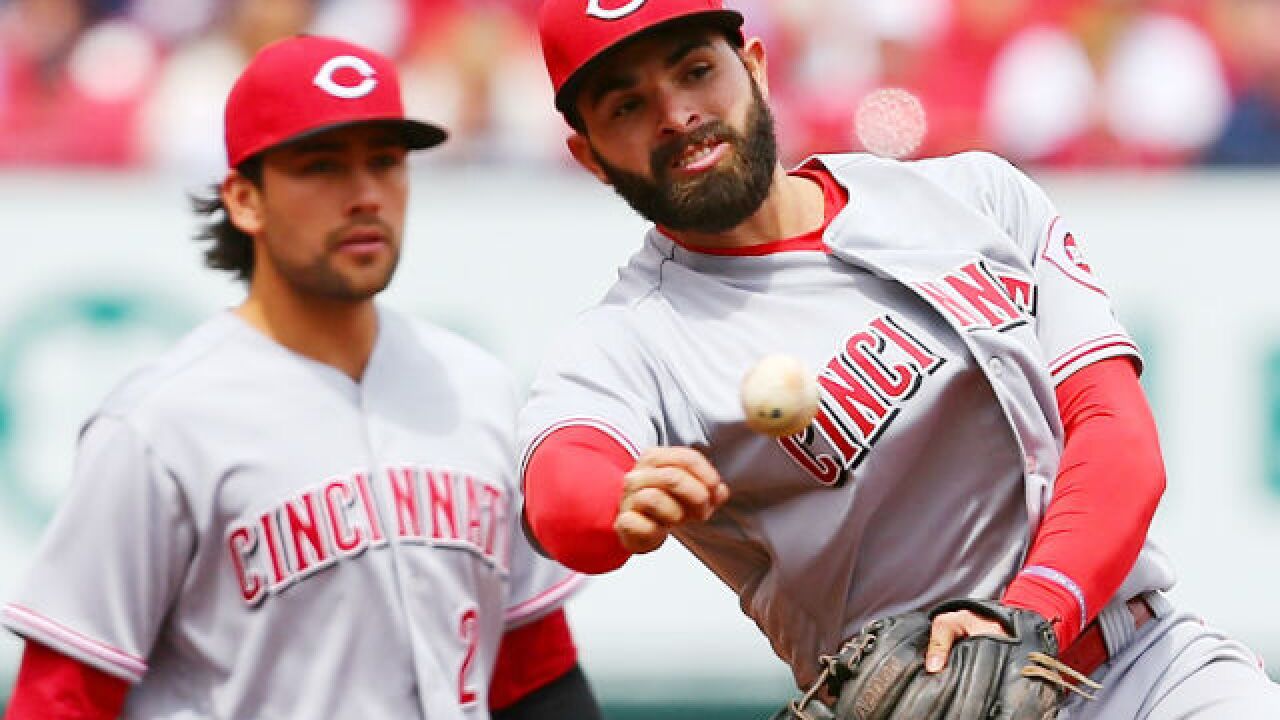 Image copyright 2018 Getty Images. All rights reserved. This material may not be published, broadcast, rewritten, or redistributed.
<p>ST. LOUIS, MO - APRIL 21: Jose Peraza #9 of the Cincinnati Reds throws to first base against the St. Louis Cardinals in the second inning at Busch Stadium on April 21, 2018 in St. Louis, Missouri. (Photo by Dilip Vishwanat/Getty Images)</p>

ST. LOUIS - Scooter Gennett came up with a big hit in the seventh inning but he couldn't do it in the ninth and the Reds fell to the Cardinals 4-3 Saturday afternoon.

Gennett's two-run single keyed a three-run rally in the seventh inning that erased the Cardinals' 3-0 lead.

But Yadier Molina's homer in the bottom of the seventh off reliever Jared Hughes (0-2) put the Cards (12-8) back on top.

The Reds loaded the bases with one out in the ninth on walks to Jesse Winker and Joey Votto sandwiched around a Jose Peraza HBP. But Gennett grounded to short for 6-4-3 double play.

The Reds fell to 3-17 and 0-2 under new manager Jim Riggleman. It was the Reds'  fourth straight loss.

St. Louis has won 10 in a row from the Reds dating to last season, matching its longest streak against them since 1949, when the Cardinals won 11 straight.

The Reds at least got Homer Bailey off the hook for the loss. Bailey gave up a two-run homer to Paul DeJong and a solo shot to Dexter Fowler and left after 5 2/3 innings. At the time, the Reds had scored a total of five runs in five Bailey starts.

"I honestly wasn't very sharp today," Bailey said. "I did some things that I wasn't very happy with today. We tried to hold them the best we could. Defensively we did a good job and the offense started coming through there at the end. It was just kind of one of those days where you had to fight back and forth.

"That's something that shouldn't be necessarily commented on. It should just be a regular thing that you do every day. Maybe it's a step in the right direction. But, the overall picture is we still need to do more," he said.

Peraza had an RBI single in the seventh. Winker, leading off, had two singles and walked twice.

Cardinals starter Carlos Martinez went six innings and held the Reds to three hits and struck out seven. The Reds got to Luke Gregerson and Tyler Lyons in the seventh, but Jordan Hicks (1-0)  used one pitch to get Cliff Pennington to fly out, ending the rally with runners at the corners.

Then Molina, a Reds killer from way back, did it again.

"I totally missed my spot right there," Hughes said. "I left it up and in the middle. It was not the pitch I wanted. He doesn't miss mistakes. He did a good job of hitting the heck out of it."

The Reds had Hicks on the ropes in the ninth but couldn't deliver the knockout punch.

"Amazing," Molina said of the hard-throwing Hicks. "This kid has the talent to pitch late in the game. Obviously when you throw 102 (miles per hour), you don't have to be afraid of anything. He's a great kid and great job for him tonight."

Cardinals 2B Kolten Wong sprinted into right field and had to make a full extension of his glove arm to pull in a flare from Reds OF Adam Duvall in the sixth. Wong then tossed the ball to 1B Jose Martinez to double off Gennett, who had already rounded second base.

Reds: RHP David Hernandez began his rehabilitation assignment at Triple-A Louisville on Friday. He pitched 1/3 of an inning, giving up three hits, four earned runs and striking out one while throwing 19 pitches. He is recovering from right shoulder inflammation.

Cardinals: OF Tommy Pham was held out of the starting lineup because of flu-like symptoms and also to provide another day off to rest a sore groin. Manager Mike Matheny said Pham was available off the bench, but he did not get into the game.

Castillo earned the victory in his first appearance this season, but lasted just five innings in his last two starts in which he took the loss both times.

Mikolas will go for his first victory at Busch Stadium since joining the Cardinals in the offseason. He got a no-decision in his only home start this year, a 5-4 loss to Milwaukee.