Reds interim manager not ready to throw in the towel after four-game sweep, 1-6 road trip 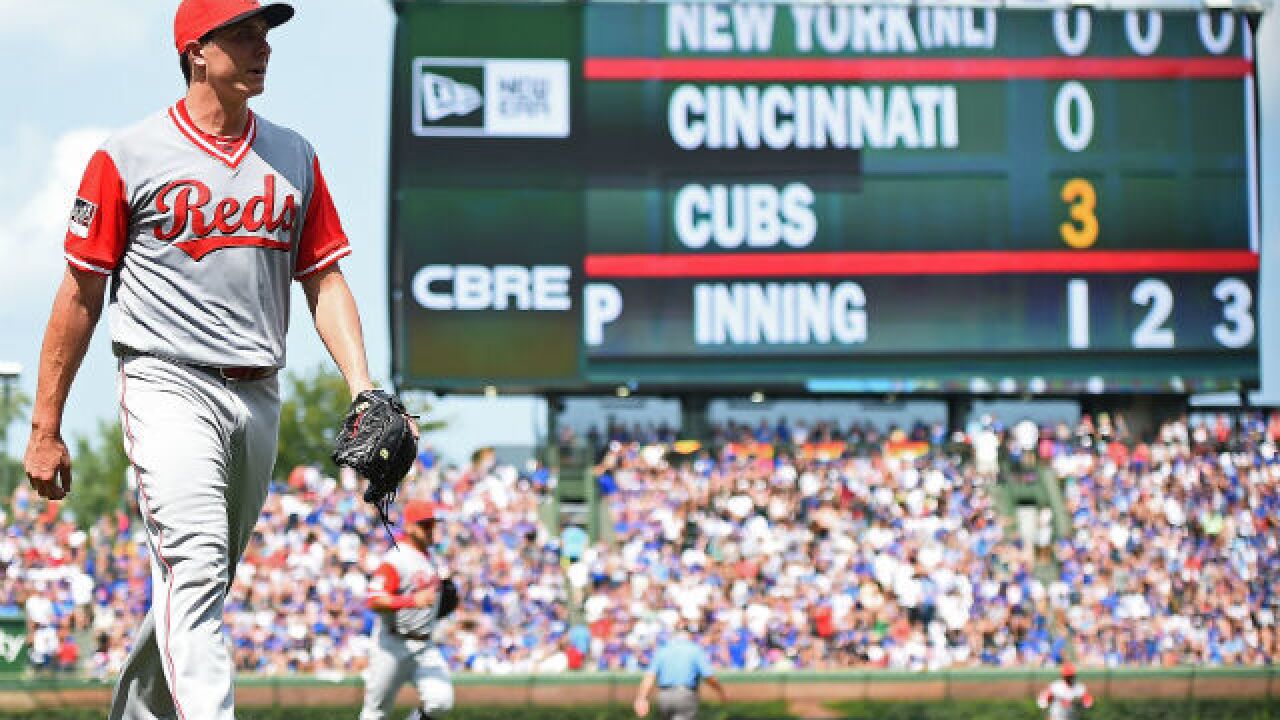 Image copyright 2018 Getty Images. All rights reserved. This material may not be published, broadcast, rewritten, or redistributed.
<p>CHICAGO, IL - AUGUST 26: Homer Bailey #34 of the Cincinnati Reds walks to the dugout after the first inning against the Chicago Cubs at Wrigley Field on August 26, 2018 in Chicago, Illinois. All players across MLB will wear nicknames on their backs as well as colorful, non traditional uniforms featuring alternate designs inspired by youth-league uniforms during Players Weekend. (Photo by Stacy Revere/Getty Images)</p>

CHICAGO — There were not many positives to take home from a 1-6 road trip - especially when it ended with a 9-0 loss and a four-game sweep.

"They dominated us these four games, and you just have to take the day off and hopefully come back with the same energy but get different results," Riggleman said.

Riggleman even gave starting pitcher Homer Bailey (1-12) the benefit of the doubt. Bailey allowed six runs — three earned — and eight hits in five innings to remain winless since May 12. The Reds have lost 17 of his 18 starts.

"With all due respect to that lineup over there — they've got a really good lineup — but today there was numerous balls that were off the end of the bat, broken bats, bloops," Riggleman said. "If it could go wrong, it went wrong.

"As the game progressed, they squared up on a couple. But overall Homer threw very well. The numbers will never indicate that."

Tucker Barnhart had two hits for the last-place Reds, who have dropped five straight and been shut out nine times.

Meanwhile, Cubs starter Kyle Hendricks appears to be at the top of his game. Hendricks allowed two hits in seven innings,

"My mechanics feel good now. Ball's doing what I want it to," said Hendricks, who is 5-2 with a 3.38 ERA in his last 11 starts. "Now it's just concentration on making the good pitch, every pitch you're out there. My fastball command has been a lot better, and everything works better off that."

David Bote and Kyle Schwarber homered. Jason Heyward went 4 for 4 with a triple and drove in two runs for the NL Central-leading Cubs. Bote added two hits and three RBIs.

Hendricks (10-10) struck out five and walked one. He has given up two runs in his last 14 innings.

"I didn't make many bad pitches at all and really changed speeds well," Hendricks said. "(Catcher) Willson (Contreras) had a great game plan back there, calling good pitches."

Hendricks, who was 1-4 with a 7.03 ERA in June, said his change-up has been more effective.

"Earlier in the season, I wasn't able to locate my fastball, so they kind of saw the change-ups," he said.

The Cubs have homered in a season-high 11 straight games and won five straight.

Hendricks was lifted for a pinch-hitter after throwing 98 pitches. Randy Rosario worked the final two innings to complete the three-hitter.

A balk by Robert Stephenson scored Anthony Rizzo in the seventh inning before Schwarber smacked a two-run home run to right field, his 24th of the season.

Bote hit a two-run homer over the left-field bleachers for a 5-0 lead in the third. Five of his six home runs this season have given the Cubs the lead or tied a game. Bote's previous homer was a walk-off against the Reds in the 10th inning on Friday.

The Cubs scored three unearned runs in the first. Heyward tripled to bring in a run when center fielder Billy Hamilton fell trying to catch his line drive.

"Jason just spun that ball, and I understand it looked like it was going to go right at him and it just hit that other gear and he slipped," Cubs manager Joe Maddon said. "That was fortuitous for us because Billy's that good."

Heyward's single drove in another run in the fifth inning. He was 0 for 14 in his previous three games.

Reds: 1B Joey Votto (lower right leg) was eligible to come off the 10-day disabled list Sunday but won't return to the field until Tuesday against Milwaukee at the earliest. Riggleman said the injury is affecting Votto's ability to run and play in the field.

Without an off day until Sept. 13, the Cubs will use a six-man rotation for at least one turn. LHP Mike Montgomery — who is on the disabled list with left shoulder inflammation — is expected to start Thursday in Atlanta. RHP Alec Mills — who joined the rotation to fill in for the injured Chatwood — will start Wednesday against the Mets.