Reds hitters, pitchers put it all together in sweeping Giants 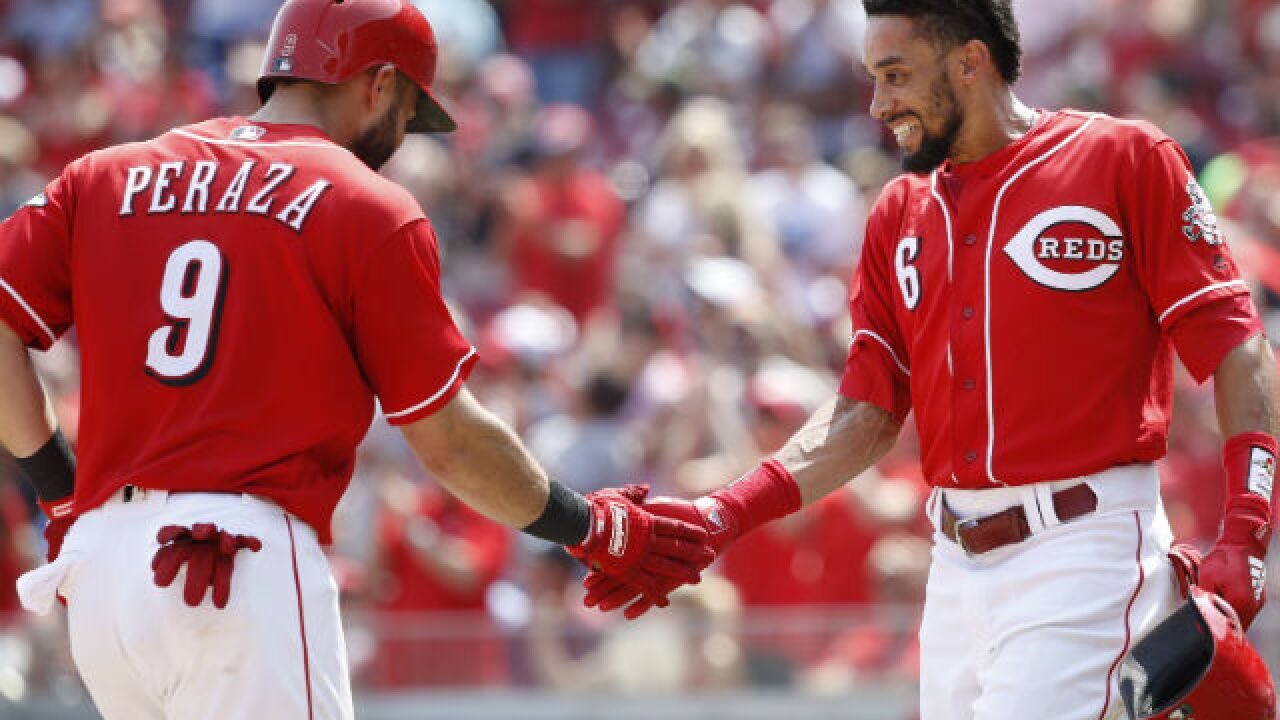 Image copyright 2018 Getty Images. All rights reserved. This material may not be published, broadcast, rewritten, or redistributed.
<p>CINCINNATI, OH - AUGUST 19: Billy Hamilton #6 of the Cincinnati Reds congratulates Jose Peraza #9 on his two-run home run in the sixth inning against the San Francisco Giants at Great American Ball Park on August 19, 2018 in Cincinnati, Ohio. The Reds won 11-4. (Photo by Joe Robbins/Getty Images)</p>

CINCINNATI (AP) — Eugenio Suarez, Luis Castillo and the Reds closed out a nice weekend with another solid day at the plate and on the mound.

It was quite a response to a tough series against Cleveland.

Suarez hit a two-run homer during Cincinnati's seven-run third inning, and the Reds swept the San Francisco Giants with an 11-4 win on Sunday.

The Reds also swept the Giants in Cincy last season. Nine different Reds scored at least one run, helping Cincinnati bounce back after it was swept by Cleveland.

"Sometimes it is when you play a club," interim manager Jim Riggleman said. "We had a hot Cleveland team, then we get a Giants team that's been struggling with the bats. We got them at the right time."

Reds right-hander Luis Castillo (7-10) struck out nine in 6 2/3 innings. He was charged with three runs, one earned, and six hits.

For the weekend, Reds pitchers allowed only one earned run in each game.

"Everything was working for me today," Castillo said. "I was commanding my changeup. My slider was good and I was throwing strikes. I think, like last year, I'm able to throw my pitches in any situation."

"You look at his velocity," Bochy said, "I don't know of anybody in the National League who throws harder on average, and his changeup was biting. He was on top of his game."

Suarez's career-best 27th homer made it 6-1 in the third. Scooter Gennett hit a two-run triple before Suarez's drive to center.

"It was an awesome inning," Casali said. "I'm sure I've had two hits in an inning at some point in my career, but not in the big leagues. Any time you put up a crooked number against a club like that, it's important."

Peraza finished with three hits as Cincinnati closed out a 5-4 homestand. Phillip Ervin had two hits and scored a run.

San Francisco had a chance to sweep Los Angeles before the Dodgers' 12-inning victory on Wednesday night. The Giants then managed just six runs in the sweep by the Reds, extending their slide to four games.

"It's frustrating," Bochy said. "We didn't hit much, The offense didn't do anything here. We were hoping for more."

Giants left-hander Andrew Suarez (4-9) was tagged for seven runs, five earned, and seven hits in a season-low 2 2/3 innings in the finale.

"I got ahead," Suarez said. "I just couldn't put them away. I didn't have that putaway pitch today. I thought I had good stuff. The location wasn't there."

Aristides Aquino made his major league debut when he ran for Gennett in the sixth inning. Aquino was recalled from Double-A Pensacola on Friday when Joey Votto was placed on the 10-day disabled list.

Reds: OF Scott Schebler (strained AC joint in his right shoulder) is set for a rehab assignment with Double-A Pensacola. The Reds hope he will be ready to join them in Chicago during their weekend series with the Cubs.

Reds: Homer Bailey (1-10) is scheduled to start Monday in Milwaukee. The Reds are 1-15 in Bailey's starts this season.