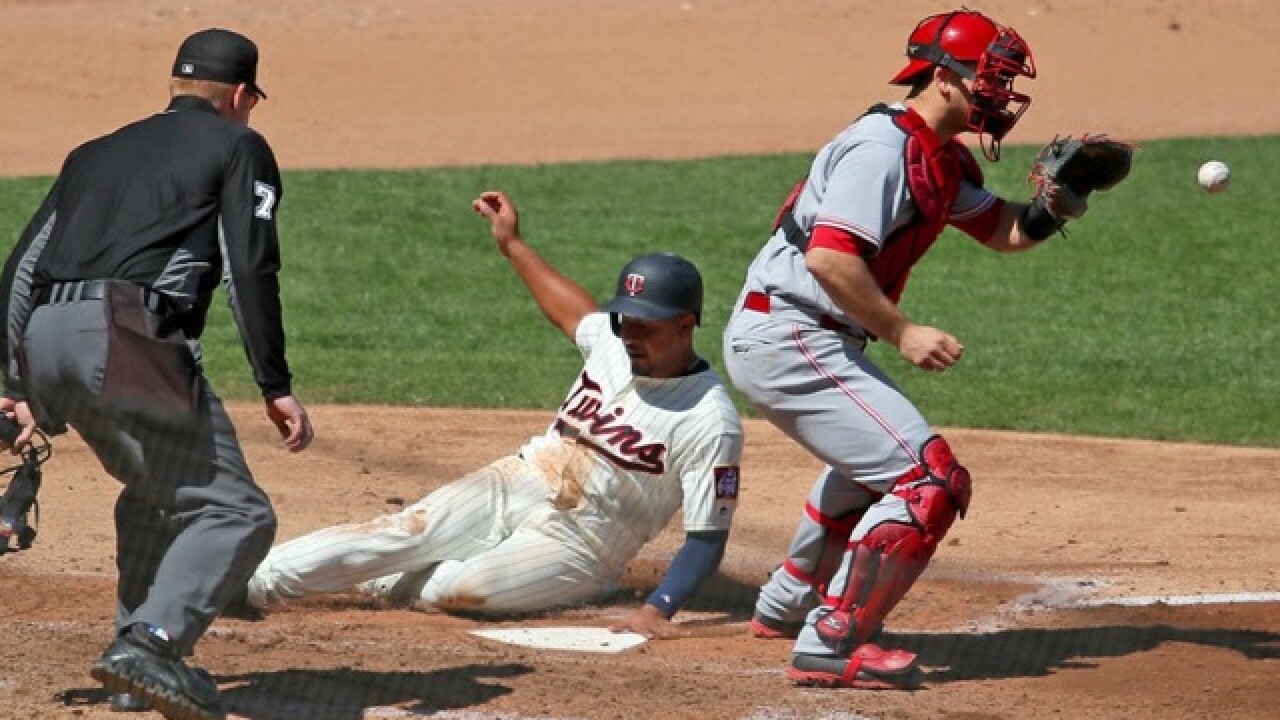 Image copyright 2018 Getty Images. All rights reserved. This material may not be published, broadcast, rewritten, or redistributed.
Adam Bettcher/Getty Images
<p>MINNEAPOLIS, MN - APRIL 28: Eduardo Escobar #5 of the Minnesota Twins scores in the fifth inning against the Cincinnati Reds at Target Field on April 28, 2018 in Minneapolis, Minnesota. The Twins defeated the Reds 3-1.</p>

MINNEAPOLIS – The Reds should have saved some of the 15 runs they scored Friday for Saturday.

The Reds (6-21) wasted three good scoring opportunities and had only Scott Schebler's solo homer to show for a 3-1 loss to the Twins on Saturday afternoon.

Coming off a 15-9 win Friday night, the Reds managed only six hits and left nine men on base. They put two runners on base in three innings with one out or none out and couldn’t convert.

In the fourth, they had runners at second and third with one out after Adam Duvall walked and Devin Mesoraco doubled. But Billy Hamilton popped out, Jesse Winker got an international walk and Jose Peraza popped out.

The Reds mounted their biggest threat in the seventh. but Hamilton and Peraza failed to come through again. Duvall led off with a double and Mesoraco beat the shift with a single to put runners on the corners with nobody out against Twins starter Jake Odorizzi. But Hamilton popped out against reliever Zach Duke, Winker struck out and Peraza flied out.

"That's probably the turning point of the game," said Odorizzi.

In the ninth, Schebler and Mesoraco walked but Tucker Barnhart, batting for Hamilton, lined out and Winker popped out to end it.

One day after the teams combined for 24 runs and 34 hits, the pitchers had the upper hand.

Odorizzi (2-2) gave up one run and five hits. Fernando Rodney worked around two walks while pitching a scoreless ninth for his third save in six chances.

"He skated through the first two innings so clean," Reds interim manager Jim Riggleman said. "And then the third and fourth they made him throw so many pitches. ... He pitched out of trouble, but I just didn't feel like making him pitch out of trouble a third time so we decided to make the change."

After Schebler homered in the second, the Twins took a 2-1 lead with two in the fourth. Eduardo Escobar hit a tying RBI double and advanced to third on Winker’s error. After Max Kepler flied out, Robbie Grossman delivered a sacrifice fly.

Garver's second home run of the season leading off the fifth ended the scoring.

Joey Votto went 0 for 3 with a walk, stopping his homer streak at four games.

Rodney had blown his previous three save opportunities, including Gary Sanchez's game-ending, three-run homer in the Twins' 4-3 loss to the Yankees on Thursday.

But the 41-year-old closer has 303 career saves and he wasn't about to let doubt creep in, even after walking two batters to put the tying run on base with one out.

"Yeah, I kept my confidence in myself," Rodney said. "Tried to find the strike zone to try to convince these guys to swing and tried to get this guy out."

Brian Dozier made a running, leaping grab of Barnhart's soft liner into short center for the second out. Then Winker popped out to end it.

"Fernando can have some traffic at times," Twins manager Paul Molitor said. "He's actually throwing it over pretty well. That hasn't been the issue. But he had a couple walks today. Thankfully, somehow he got those three outs and we can shake hands. It's been a while."

Twins: An MRI confirmed OF Byron Buxton has a hairline fracture in his left big toe. Buxton fouled a ball off his foot in a minor-league rehab game in Florida last Sunday. He was placed on the 10-day disabled list due to migraines on April 18. Twins manager Paul Molitor said Buxton would stay in Minnesota and work out with the team, but he's not likely to return to the lineup during the current homestand, which wraps up on Thursday.