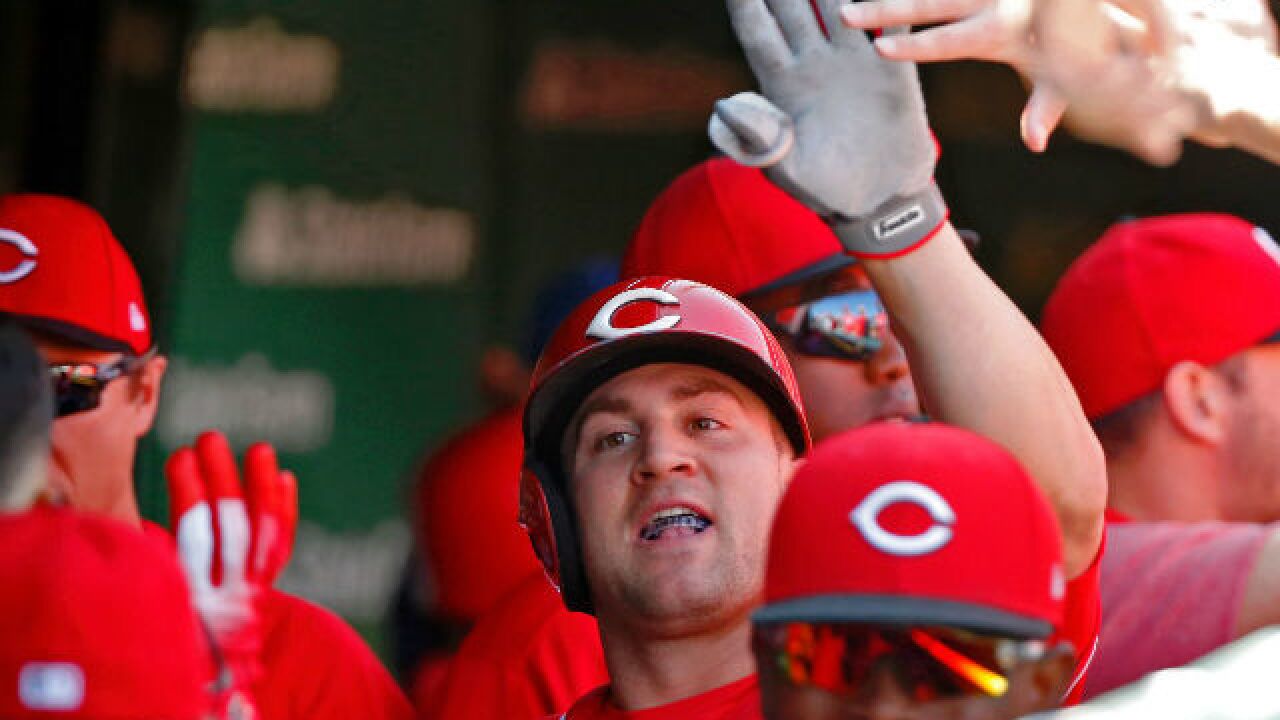 Image copyright 2018 Getty Images. All rights reserved. This material may not be published, broadcast, rewritten, or redistributed.
<p>CHICAGO, IL - SEPTEMBER 16: Scott Schebler #43 of the Cincinnati Reds is congratulated in the dugout after hiting a home run on the first pitch of the game against the Chicago Cubs during the first inning at Wrigley Field on September 16, 2018 in Chicago, Illinois. (Photo by Jon Durr/Getty Images)</p>

CHICAGO — The Reds got good starting pitching for the third straight day at Wrigley Field, only this time they also got the win.

Luis Castillo (10-12) allowed one run, four hits and four walks in 6 2/3 innings and Scott Schebler and Phillip Ervin homered for a 2-1 victory Sunday after the Cubs won the first two games of the series.

Reds starters, including Matt Harvey and Cody Reed, limited the Cubs to one run in 17 2/3 innings.

The Reds held the injury-plagued Cubs to five runs in the series. Unfortunately, the Reds scored just four and lost the first two games 3-2 and 1-0.

Amir Garrett and Jared Hughes combined for four outs and Raisel Iglesias pitched the ninth Sunday for his 27th save in 31 chances, completing a five-hitter.

Schebler hit Jose Quintana’s first pitch of the game out of the park and Ervin went deep in the fourth.

“I got a pretty good swing on a ball,” Schebler said. “I’m just trying to make contact in this place. Historically, I’m pretty awful at Wrigley, so honestly, it was nice to but a barrel on a ball.”

The Cubs scored their only run when Albert Almora Jr. hit a sacrifice fly off Castillo in the fifth.

The injury-plagued Cubs have totaled 15 runs in their last seven games but remain 2½ games ahead of second-place Milwaukee in the NL Central race.

Quintana (13-10) was bidding for what would have been a career-high 14th win, but Schebler drove a 93 mph fastball into the bleachers just left of the batter’s eye, and Ervin homered leading off the fourth.

Chicago’s Victor Caratini hit a sharper grounder down the line with runners on first and second in the bottom half. First base umpire Hunter Wendelstedt called the ball foul as he unsuccessfully tried to jump out of the way.

Cubs manager Joe Maddon wasn’t so sure the ball was foul. The play isn’t viewable, so he asked the umpires if they could get together and discuss it. They declined and the call stood.

Garrett escaped second-and-third, two-outs trouble in the seventh when he relieved and struck out Anthony Rizzo, who slammed his helmet.

“Offense is peaks and valleys and you just ride it out,” Cubs star Kris Bryant said. “There have been plenty of times this year when the offense is great, and plenty of times when it wasn’t. We just have to ride it out and hope that the next game is the one where we explode.”

Willson Contreras doubled off the wall in center in the middle of the Cubs’ fifth-inning rally, but drew Maddon’s ire because he flipped his bat and stood watching the ball. He then had to bust it and dive head first into second base — and might have been out if the throw wasn’t off line.

“Horrible,” Maddon said. “I didn’t like that at all. That will be addressed.”

Said Contreras: “I thought it was gone. I hit it super good. What I did was not good for baseball, watching it. I embarrassed myself.”

Reds: RHP Robert Stephenson (shoulder tendinitis) is unlikely to be activated this season, according to Riggleman. Stephenson has been on the 10-day DL since Aug. 30.

Cubs: OF Jason Heyward (right hamstring tightness) was activated from the 10-day DL but did not play. ... INF Tommy La Stella was scratched about two hours before first pitch because of lower back tightness. ... LF Kyle Schwarber (back) missed his sixth straight game.