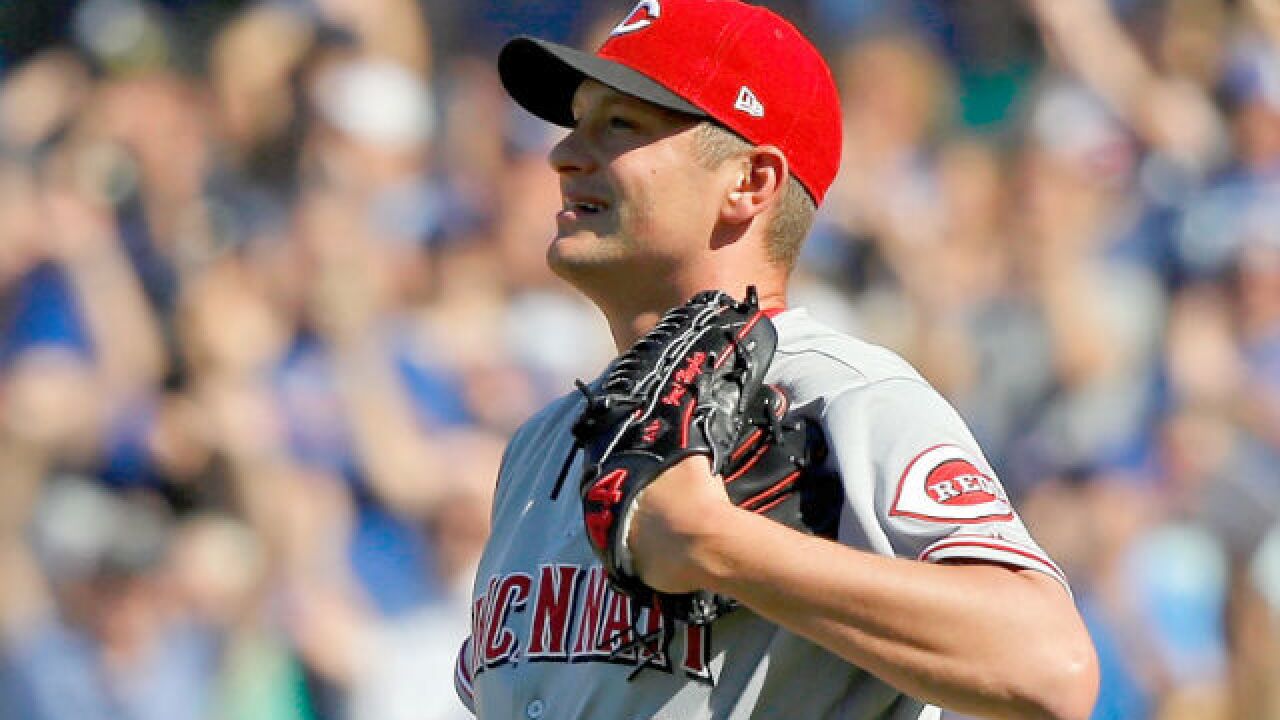 Image copyright 2018 Getty Images. All rights reserved. This material may not be published, broadcast, rewritten, or redistributed.
<p>CHICAGO, IL - JULY 07: Jared Hughes #48 of the Cincinnati Reds reacts after being unable to field a comebacker by Javier Baez and let Chicago Cubs score the tying run in the eighth inning at Wrigley Field on July 7, 2018 in Chicago, Illinois. The Cubs won 8-7. (Photo by Jon Durr/Getty Images)</p>

CHICAGO — The Reds bullpen blew a big lead and let one get away against the Chicago Cubs Saturday.

The Reds led 5-0 after three innings and looked like they would extend their five-game winning streak against the Cubs. But Amir Garrett, Jared Hughes and David Montgomery gave up five late runs - including four in the eighth - that doomed them to an 8-7 loss.

"Amir gave us a clean seventh inning, and the wheels fell off in the eighth," Cincinnati manager Jim Riggleman said..

The Reds were leading 7-2 in the sixth with Matt Harvey on the hill, but Addison Russell hit a pop-fly double when Scott Schebler lost it in the sun and reliever Randy Rosario followed with an RBI single.

Montgomery allowed Javier Baez's homer in the seventh, but the eighth was the killer.

Garrett, who retired three straight batters in the seventh, walked Victor Caratini and Addison Russell to start the eighth. Pinch hitter David Bote then singled to load the bases.

Hughes (2-3) replaced Garrett and Ben Zobrist greeted him with a two-run double to left-center to trim the deficit to 7-6. Baez followed with a comebacker, but Hughes bobbled the ball and then fell down as he tried to field it. Baez was credited with an RBI infield hit as Bote scored for a tie at 7.

"It was right there. It hit my glove," Hughes said. "I think it was a hit, but still, I should have made the play."

Anthony Rizzo then drove in Zobrist with a groundout to second base to put Chicago on top.

The five-run deficit was the largest the Cubs have overcome during the eight comeback wins.

"It's a good sign that I can go out, not feel great, be out of whack and still get somewhat deep in the game and limit the damage," said Harvey.

Nevertheless, Harvey, who has a 1.88 ERA over his last four starts, figures to be trade bait as the rebuilding Reds look to unload him before the July 31 non-waiver deadline.

Randy Rosario (4-0) allowed two hits in 2 1/3 innings to get the win. Brandon Marrow worked the ninth for his 20th save.

The Reds scored two gift runs in the first on wild pitches by Cubs starter Tyler Chatwood. Suarez's 18th homer in the third gave the Reds a 5-0 lead.

Chicago moved closer with a pair of runs in the fourth. Caratini drove in the first with a double and then scored on an RBI groundout by Russell.

Cincinnati reclaimed the five-run advantage with single runs in the fifth and sixth innings on RBI singles by Jesse Winker and Joey Votto.

Cubs: OF Jason Heyward left the game after taking a foul ball to the groin in the third inning. 3B Kris Bryant (left shoulder inflammation) took batting practice, fielded grounders and ran the bases before the game. Manager Joe Maddon said Bryant will go on a rehab assignment before being activated, although the details haven't been worked out yet.