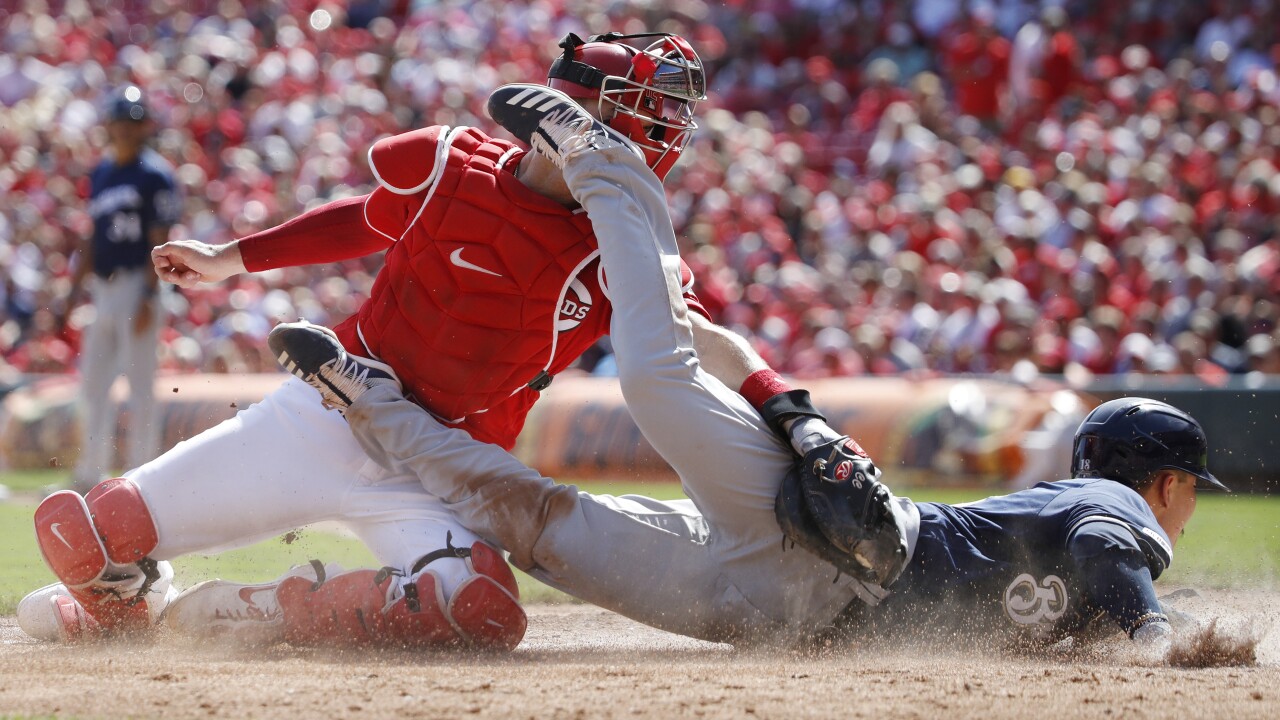 CINCINNATI — The carpeting in the Brewers’ clubhouse was still damp from all the bubbly and beer sprayed around the place only a dozen hours earlier. No matter. With a chance for an even bigger celebration ahead, Milwaukee locked in and kept on winning.

It’s going to be an interesting weekend in the NL Central.

Orlando Arcia doubled with the bases loaded, and the Brewers shook off the fizz from their playoffs-clinching celebration to close on the division lead Thursday, beating the Reds 5-3 for their seventh straight victory .

The Brewers earned at least a wild card with a 9-2 win on Wednesday night, dousing each other in the clubhouse afterward. Little more than 12 hours after the empty bottles and cans were cleared away, Milwaukee focused on an even bigger prize.

“We made it so it’s a big weekend in Denver,” manager Craig Counsell said.

Milwaukee moved within one game of the idle Cardinals for first place heading into the final weekend, the same status as a year ago when the Brewers also were a game out with three to play. They caught the Cubs and then beat them at Wrigley Field in a one-game tiebreaker for the division title.

Milwaukee concludes with three games at Coors Field against the team it swept in the playoffs last year before losing to the Dodgers in the NL Championship Series. The Cardinals host the Cubs.

“We’ve just got to keep doing what we’re doing,” Counsell said “We need some help. It’s an uphill climb with three games to go, but we’ve given ourselves a chance. To get it to one game with three to play, you feel like you definitely put some heat on the Cardinals.”

Just like last year, the Brewers have used a sizzling September in their race toward the top. Despite losing 2018 NL MVP Christian Yelich to a broken kneecap, the Brewers have won 18 of 20 and have the best September record in the majors at 20-4. Their seven-game winning streak matches their longest this season.

“Yeah, people don’t believe it, but here we are,” Arcia said through a translator.

Counsell’s Brewers swept the Reds for the second time this season, also taking a three-game series in April at Great American Ball Park.

“I’ve always respected him and the way his teams play,” Reds manager David Bell said. “They’re a lot like how he was as a player. Outside of us not being in it, I’m happy for them. As a fan, it’s fun to watch them.”

The Reds’ focus was on broadcaster Marty Brennaman’s final game after 46 seasons. The mayor declared Marty Brennaman Day during pregame festivities, and the 77-year-old broadcaster headed to the booth one last time before retirement.

Fans hoped to hear his “this one belongs to the Reds” call after a victory, but not even Cincinnati’s ace could make it happen. Luis Castillo (15-8) walked the bases loaded in the fourth and gave up Arcia’s bases-clearing double off the glove of left fielder Josh VanMeter. Ben Gamel followed with another double for a 4-1 lead.

Chase Anderson (8-4) allowed Aristides Aquino’s solo homer in five innings, then turned it over to a bullpen that’s the team’s strength. Josh Hader escaped a bases-loaded threat in the eighth and got the last four outs for his 37th save in 43 chances.

Brennaman is one of eight major league broadcasters who covered one team for at least 46 seasons, joining the Dodgers’ Vin Scully (67), the Mets’ Ralph Kiner (52), the Royals’ Denny Matthews (51), the Brewers’ Bob Uecker (49), the Cardinals’ Jack Buck and Mike Shannon (48), and the Dodgers’ Jaime Jarrin (47).

Brewers: Eric Thames felt hamstring discomfort after running out a grounder in the second inning and left the game as a precaution.

Reds: Eugenio Suárez got a day out of the lineup after hitting his 49th homer Wednesday night. He pinch hit in the eighth and was walked intentionally.

Brewers: Head to Colorado with Zach Davies (10-7) facing Antonio Senzalela (10-11) in the opener.