Pirates get to Bauer, earn doubleheader split with Reds 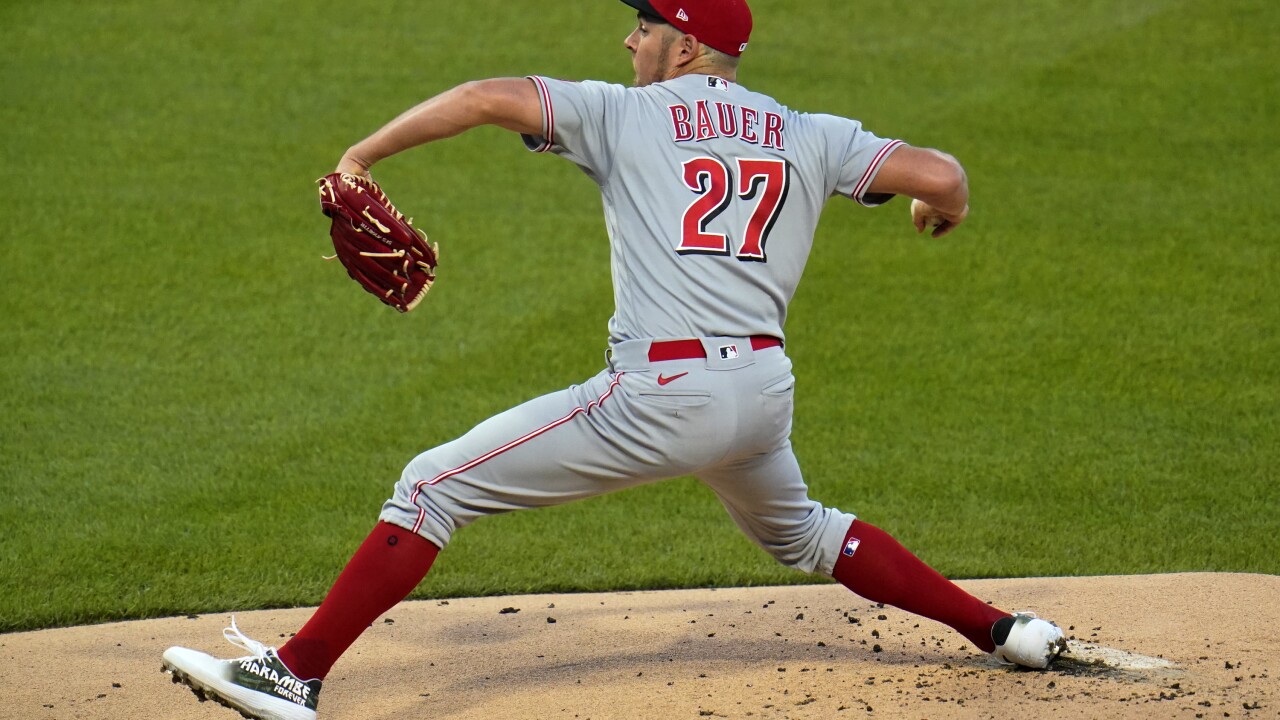 (Copyright 2020 The Associated Press. All rights reserved. This material may not be published, broadcast, rewritten or redistributed.)
Gene J. Puskar/AP
Cincinnati Reds starting pitcher Trevor Bauer delivers during the fourth inning of the second baseball game of a doubleheader against the Pittsburgh Pirates in Pittsburgh, Friday, Sept. 4, 2020. (AP Photo/Gene J. Puskar)

PITTSBURGH (AP) — The Pittsburgh Pirates knew they weren’t going to get many chances against Cincinnati’s Trevor Bauer. Thanks in large part to an influx of speed they’ve received over the last week, they didn’t let their limited opportunities go to waste.

Rookie third baseman Ke’Bryan Hayes scored from first on newly acquired outfielder Anthony Alford’s fourth-inning triple and Alford sprinted home on a wild pitch from Bauer that wasn’t really that wild as Pittsburgh earned a doubleheader split with a 4-3 victory in the nightcap on Friday.

The Reds took the opener 4-2 behind the strength of Luis Castillo, who picked up his first victory in nearly a year when he worked six solid innings. Cincinnati, however, missed a chance to sweep a doubleheader for the third time this season when the Pirates scrounged up just enough offense against Bauer.

Bauer (3-3) allowed four runs, only one of them earned, in six innings. He surrendered six hits against two walks and seven strikeouts.

While Bauer wasn’t upset with his performance, the way things unraveled briefly — and quickly — in the fourth left him seething. Colin Moran reached on first baseman Joey Votto’s error leading off the inning. Bauer retired the next two batters but Hayes singled after a lengthy at bat and Alford — claimed off waivers from Toronto last week — laced a triple to center to tie the game.

Bauer quickly got ahead of John Ryan Murphy but then put a breaking ball in the dirt. It skittered away from catcher Tucker Barnhart and Alford darted home. When Bauer struck out Murphy to end the inning, he screamed in disgust.

“I take pride in my day to pitch that we’re going to win,” Bauer said. “I wasn’t happy with how I let that spiral out of control and how that inning went, so yeah, I was mad.”

Mike Moustakas hit his third home run of the season in the bottom of the fourth to tie it, but Pittsburgh went in front to stay in the fifth when Kevin Newman singled leading off the inning, moved to third on a hit-and-run and scored when Bryan Reynolds grounded into a double play.

“We felt like we had to make some things happen,” Pirates manager Derek Shelton said. “And credit to our guys, the most important part of the win tonight was we did. We got guys in motion, we got guys on base, and we created our runs.”

Sam Howard (2-1) picked up the win in relief of starter Cody Ponce. Richard Rodriguez worked a perfect seventh for his third save. Nik Turley escaped a two-on, two-out situation in the sixth when he struck out pinch-hitter Matt Davidson.

The Reds hit second rather than first in Game 2, a quirk of the schedule necessitated by the postponement of two games in Cincinnati last month after a Reds player tested positive for COVID-19.

Castillo (1-5) collected his first victory since Sept. 13, 2019, when he kept the Pirates in check in the opener. The 27-year-old, a 15-game winner and an All-Star last season, had dropped seven straight decisions dating back to last season.

Nick Castellanos hit his 11th home run for the Reds, a solo shot off Steven Brault (0-2) that gave Castillo the kind of support he’s lacked most of this season. Entering Friday, the Reds had scored two runs or less in five of Castillo’s seven starts. Raisel Iglesias pitched the seventh for his fifth save.

Reds: RHP Sonny Gray’s next start was pushed at least two days to give him a little bit more rest after getting knocked around by St. Louis on Tuesday. Gray was scheduled to start on Sunday but manager David Bell said Gray will instead start at some point during a three-game series with the Cubs next week.

Reds: Anthony DeSclafani (1-2, 7.71 ERA) will try to bounce back from a rough start against St. Louis when he takes the hill on Saturday.