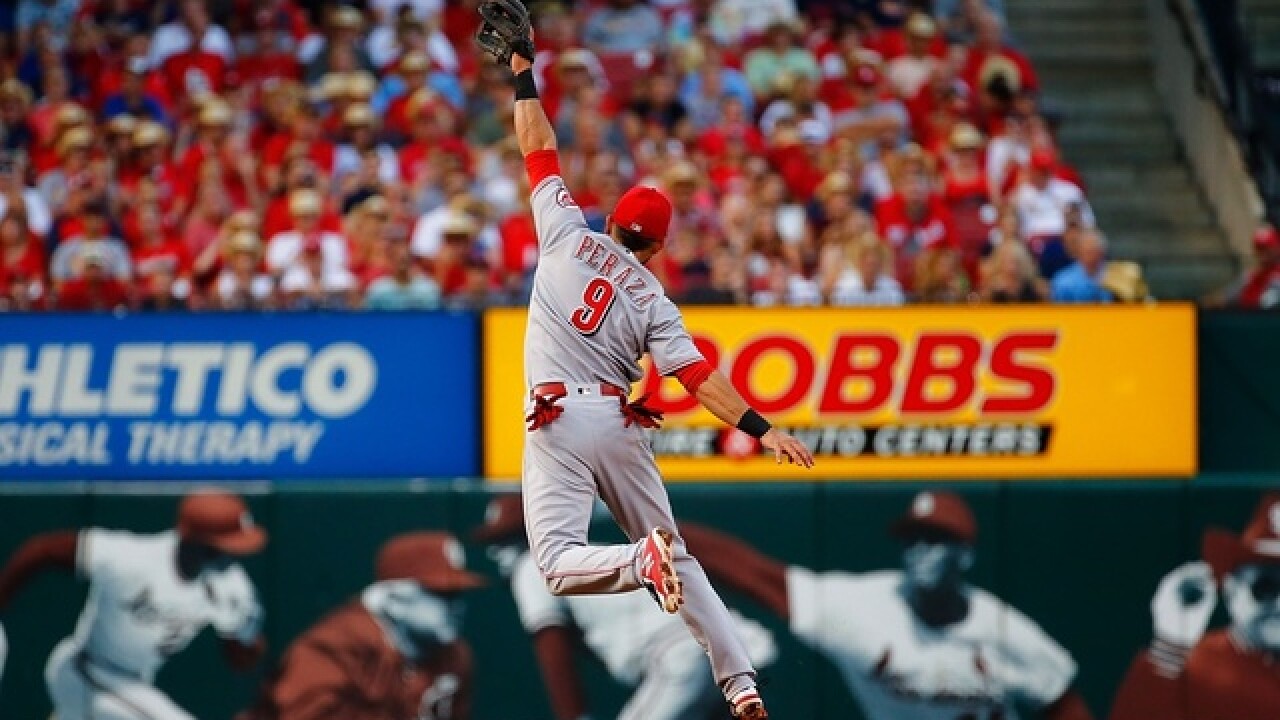 Copyright 2018 Scripps Media, Inc. All rights reserved. This material may not be published, broadcast, rewritten, or redistributed.
Dilip Vishwanat
<p>ST. LOUIS, MO - JULY 13: Jose Peraza #9 of the Cincinnati Reds attempts to catch a line drive against the St. Louis Cardinals in the first inning at Busch Stadium on July 13, 2018 in St. Louis, Missouri. (Photo by Dilip Vishwanat/Getty Images)</p>

ST. LOUIS (AP) -- Jose Peraza had a career-best five hits, Scooter Gennett drove in two runs and the Cincinnati Reds waited out a pair of rain delays before beating the St. Louis Cardinals 8-2 on Saturday night.

Following the two days that totaled 2 hours, 43 minutes, Cincinnati trailed 2-0 after five innings before rallying for eight runs in its final four at-bats.

Gennett hit a 100 mph fastball off Jordan Hicks (3-2) to right field for a single to drive in Billy Hamilton with the bases loaded in the seventh inning to put the Reds ahead 3-2.

Peraza's 5-for-6 performance came after he had registered four hits on four previous occasions, most recently on April 27 at Minnesota. He tied the game at 2 in the seventh when he singled on a chopper up the middle that bounced off Hicks' pitching hand to drive in Dilson Herrera.

Cincinnati has won three straight against St. Louis after having dropped 13 in a row to the Cardinals.

Hicks allowed four runs on four hits, a walk, and one hit batter while recording just one out in the seventh inning.

Austin Brice (2-2) retired both batters he faced in the sixth after replacing Kyle Crockett, who opened the inning.

Gennett hit a double to left field off Mike Mayers in the sixth inning to score Joey Votto. He has 44 RBIs in 83 career games against St. Louis.

Jack Flaherty allowed two hits in five scoreless innings. He returned following a 52-minute rain delay after the first inning, but was removed from the game after play was halted for 1 hour, 51 minutes after the fifth.

Matt Carpenter hit his 18th home run of the season in the first inning. It was his 19th career leadoff home run and fourth in 2018. He has 36 extra-base hits since May 15.

Yadier Molina started his 1,801st game at catcher to move past Tony Peña into eighth place in combined regular season and postseason starts behind the plate.

Reds: RF Scott Schebler departed in the sixth inning after running into the right-field wall after catching Molina's fly.

Cardinals: OF Tyler O'Neill began a 20-day injury rehabilitation assignment with Triple-A Memphis, where he went hitless in three at-bats Saturday with a strikeout at Omaha. O'Neill has been sidelined since July 5 with a left hamstring strain.

RHP Anthony DeSclafani (4-1, 4.43) will face RHP Miles Mikolas (10-3, 2.65). DeSclafani has won his last four decisions and is 5-1 with a 2.30 ERA in eight career outings against the Cardinals. Mikolas will represent the Cardinals at the All-Star Game at Nationals Park on Tuesday but will not pitch.