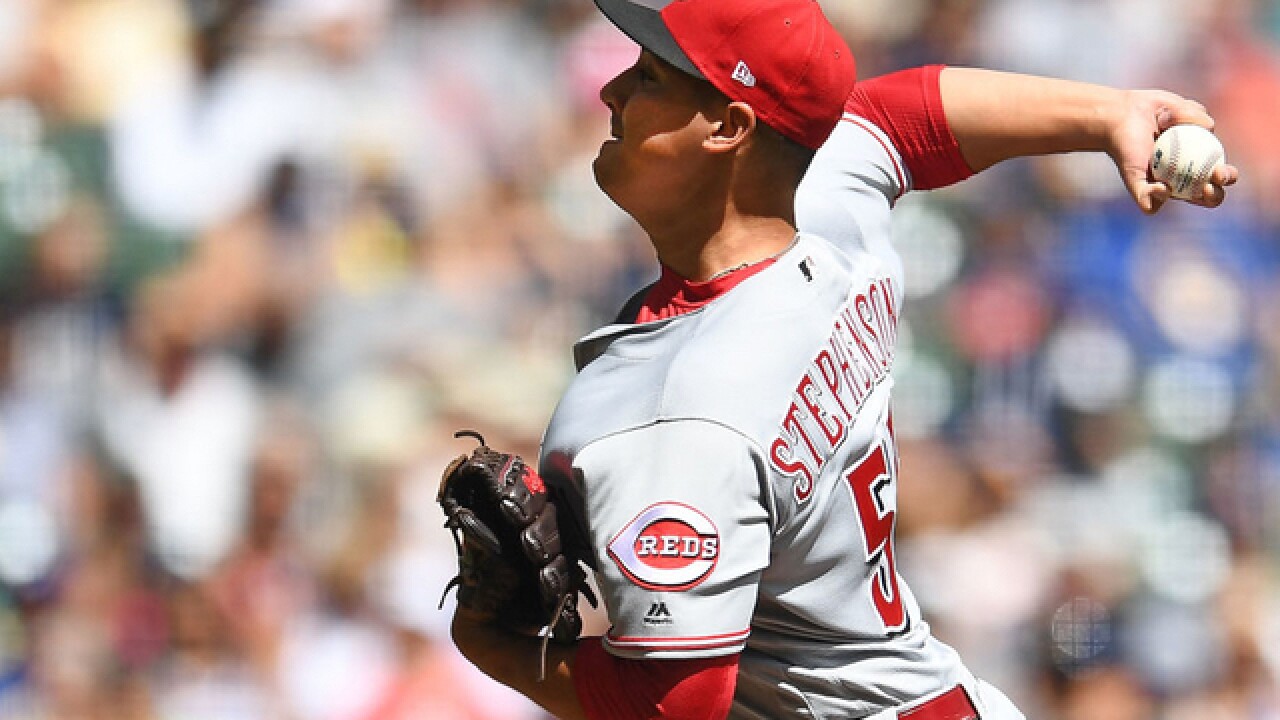 Image copyright 2018 Getty Images. All rights reserved. This material may not be published, broadcast, rewritten, or redistributed.
Stacy Revere
<p>MILWAUKEE, WI - AUGUST 22: Robert Stephenson #55 of the Cincinnati Reds throws a pitch during the first inning of a game against the Milwaukee Brewers at Miller Park on August 22, 2018 in Milwaukee, Wisconsin. (Photo by Stacy Revere/Getty Images)</p>

MILWAUKEE (AP) — Freddy Peralta was pleased with his seven shutout innings. The rookie was happier with his offensive contribution.

Peralta tossed seven scoreless innings and drove in a run with his first career hit, combining with two relievers on a five-hitter in the Milwaukee Brewers' 4-0 victory over the Cincinnati Reds on Wednesday.

"I was waiting for this day, my teammates, too," said Peralta, adding that his teammates have been razzing him about his hitting — or lack of. "When are you going to get your first hit?' I said I will this year ... and today, I got it."

Christian Yelich homered and finished a triple shy of the cycle, reaching base five times and driving in two runs for Milwaukee. He opened the first with his 21st homer, doubled in the third, walked in the fourth and singled in the sixth and eighth.

Peralta (6-4) allowed just three singles, striking out seven and walking two to win for the second time in seven starts. The 22-year-old right-hander did not allow a hit until Jose Peraza's single to open the fourth.

"There was not a lot of hard contact today at all," Brewers manager Craig Counsell said. "It was a lot of strikes. He was efficient, right about 100 pitches through seven innings. It was a very good performance, for sure."

Peralta was 0 for 22 with 11 strikeouts this season before he drove in the Brewers' second run with a fourth-inning single. He advanced the runners with his first career sacrifice bunt when the Brewers added two runs in the sixth.

"He's taken a lot of right turns back to the dugout so far in his hitting career," Counsell said. "It was a big spot. It's an RBI and then the bunt set up a two-run inning, too. He was a big offensive contributor today."

Peralta, who entered with a first-inning 9.00 ERA, needed just nine pitches to get through the first, finishing with 95 pitches in a career-high seven innings.

"When you work fast, quick, you have more opportunity to be longer in the game, throw six, seven or eight innings," Peralta said. "You help the bullpen be better for the next day."

Milwaukee has won three of four after losing four of its previous five.

"I'm happier with the way it went, "Stephenson said. "I'm still not where I want to be but it's a step in the right direction. I left some balls up that got hit hard. I also made some good pitches that fell today."

The Reds loaded the bases in the eighth against Taylor Williams, but Jeremy Jeffress came on and retired Scooter Gennett on a flyball to left, and then finished with a perfect ninth for his sixth save in 10 opportunities.

With one out in the fourth, Ryan Braun doubled off the glove of diving left-fielder Phillip Ervin. Manny Pina was intentionally walked with two outs to get to Peralta, who responded with single up the middle.

The Brewers made it 4-0 in the sixth when Jonathan Schoop and Pina singled and advanced on Peralta's bunt. Yelich and Lorenzo Cain followed with consecutive RBI singles.

Sloppy baserunning cost Milwaukee a couple of early runs. Braun doubled with one out in the second, but was caught off the bag on Schoop's fielder's-choice grounder to shortstop. Pina then followed with a single.

Yelich doubled to open the third, but was caught stealing. Cain then singled.

The Brewers, who stranded 14 runners, left the bases loaded in the fourth when Cain struck out looking and failed to score in the eighth after loading the bases with no outs.

"We were in trouble so many innings. It feels like it was a 10-0 ball game but we were really only a couple swings from tying the ball game up," said Reds manager Jim Riggleman. "Robert (Stephenson) did a good job minimizing the damage. But there were a lot of baserunners out there."

Yelich appeared to steal third after his third-inning double but was called out as third baseman Dilson Herrera blocked the bag with his foot. The Brewers challenged, but the call was upheld after a review estimated at 1 minute, 1 second.

OF Scott Schebler (right shoulder) is expected to come off the DL on Thursday or Friday, when Cincinnati faces the Cubs. Schebler might not start against lefty Cole Hamels on Thursday night even if activated. ... 1B Joey Votto (lower right leg) is eligible to come off the DL on Sunday and will do that if ready. "If he says he's ready to go Sunday, he will play Sunday," manager Jim Riggleman said. "Yesterday he said he felt really good. We have three or four more days to evaluate him."

Right-hander Anthony DeSclafani (6-3, 4.12 ERA) starts the opener of four-game series Thursday against the Cubs. He is 2-0 with a 0.83 ERA in three starts in August, allowing one run in his last 19 2/3 innings.