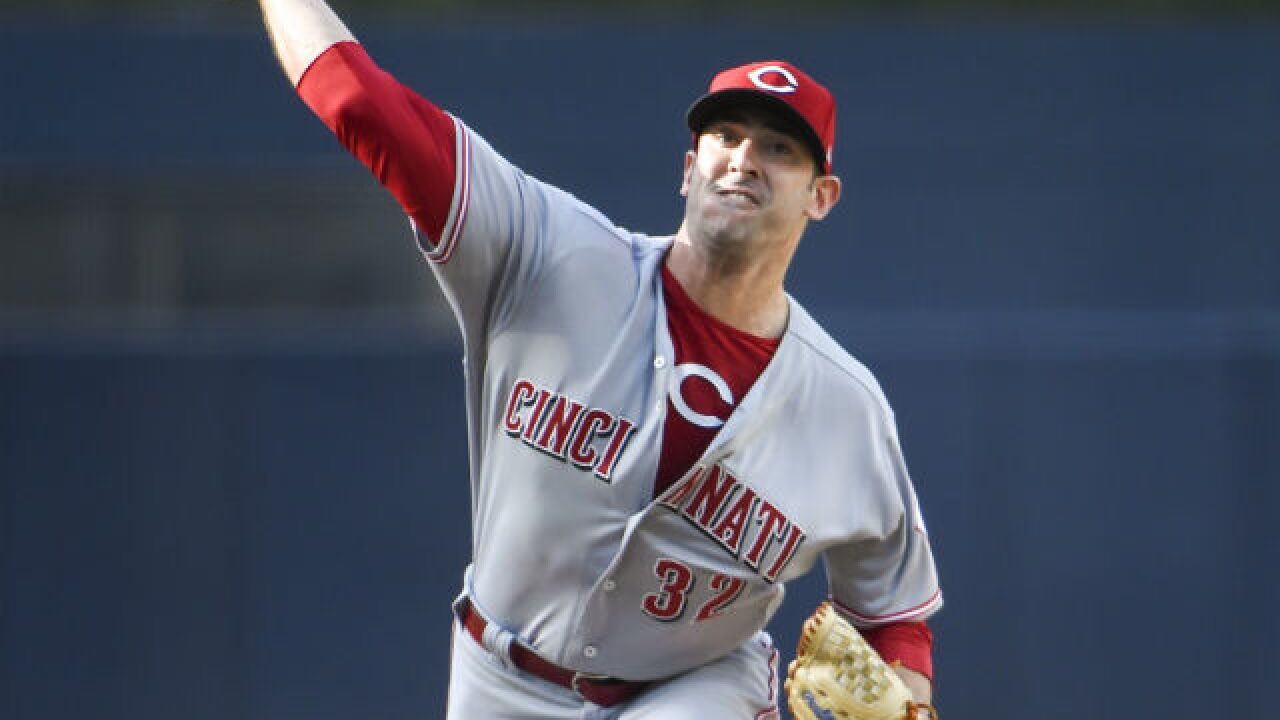 Image copyright 2018 Getty Images. All rights reserved. This material may not be published, broadcast, rewritten, or redistributed.
<p>SAN DIEGO, CA - JUNE 2: Matt Harvey #32 of the Cincinnati Reds pitches during the first inning of a baseball game against the San Diego Padres at PETCO Park on June 2, 2018 in San Diego, California. (Photo by Denis Poroy/Getty Images)</p>

SAN DIEGO – Matt Harvey would like to have back that one bad inning.

Harvey took another step back in his comeback and took his second straight loss, 8-2, to the Padres on Saturday.

The Padres plated four runs in the second inning to make it 5-0. Harvey blanked them over his last three innings, but the damage was done.

“Thing just kind of unraveled in that second inning. It's frustrating, the last two starts I've had, one inning is really causing a lot of the damage,” said Harvey (1-4).

“I think I got through the first inning fine, then kind of became mechanical and slowed everything down a little bit instead of just getting after it. Once I sped up my mechanics and stopped worrying about staying back or staying closed and this and that, it was a completely different ballgame."

Last Sunday,  Harvey gave up two first-inning homers to the Rockies and went on to an 8-2 loss.

With the score tied at 1, the Padres loaded the bases with no outs against Harvey in the second on singles by rookie Franmil Reyes and Freddy Galvis and a walk by A.J. Ellis. Manuel Margot hit a two-run double down the right-field line. Rookie pitcher Eric Lauer followed with a sacrifice fly and Travis Jankowski added an RBI single.

Harvey gave up six hits in five innings, struck out three and walked one.

It was a big night for a pair of 22-year-old San Diego rookie left-handers. Lauer (2-3) got things started when he pitched five strong innings, drove in his first run and picked off Joey Votto to tie for the big league lead.

Lauer's only real mistake was allowing Curt Casali's solo homer in his first Reds at-bat with one out in the second. Casali was acquired from Tampa Bay on Thursday and was added to the 25-man roster on Friday.

Votto singled with two outs in the third and was picked off by Lauer, who tied Atlanta's Julio Teheran with five pickoffs, the most in the majors. The Padres lead the big leagues with 11 pickoffs.

Jose Castillo had an impressive MLB debut by striking out the side in the eighth, starting with Votto on a 95-mph fastball.

"That was cool, wasn't it?" Lauer said of his new teammate, who was recalled from Triple-A El Paso earlier in the day. Castillo was acquired along with Wil Myers from Tampa Bay in a three-team, 11-player trade on Dec. 18, 2014. He became the ninth Padres player — and seventh pitcher — to debut this season.

"It's cool to be a part of it. I've seen it firsthand," Lauer said. "I've been with a ton of these guys that are coming up. I was one of those guys that came up. You just hope to see these guys stick and kind of have a little culture change to where we turn this club around. We've got a lot of good guys in this clubhouse right now as it is. Everybody wants to win. Nobody in here wants to lose. The more we can win, the better this clubhouse will be."

Castillo first showed flashes of what he can be when he pitched for Venezuela in the 2017 World Baseball Classic.

"Fun. I gave him a really easy batter the first one he faced," manager Andy Green joked about having Castillo start off against Votto. "The guy's as good as it comes. That's fun in and of itself, the first strikeout being Joey Votto. There's probably not too many pitchers who can actually say that.”

Castillo said having played in the WBC helped him handle the pressure of his debut.

The Padres added on against the Reds' bullpen when they opened the seventh with five straight singles. Eric Hosmer drove in one run and Matt Szczur had a two-run base hit. Cincinnati's Scott Schebler homered on Phil Hughes' first pitch of the ninth. It was his seventh.