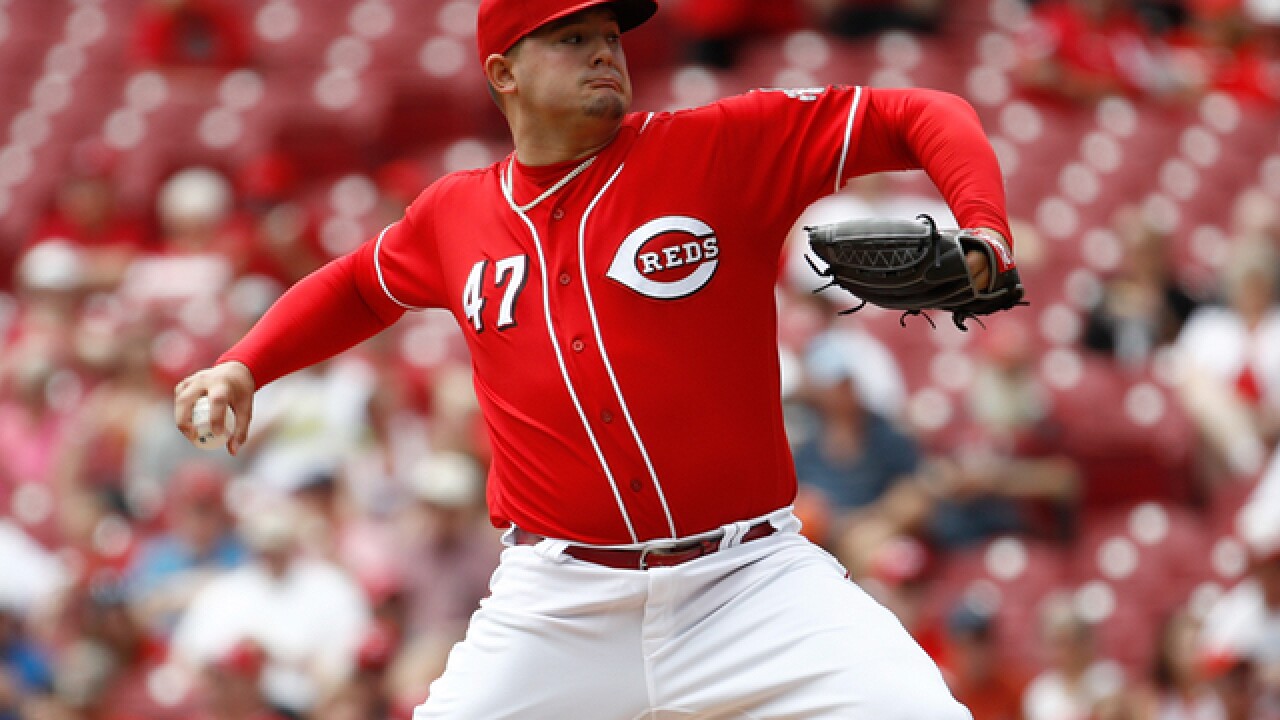 Image copyright 2018 Getty Images. All rights reserved. This material may not be published, broadcast, rewritten, or redistributed.
Andy Lyons
<p>CINCINNATI, OH - MAY 09: Sal Romano #47 of the Cincinnati Reds throws a pitch against the New York Mets at Great American Ball Park on May 9, 2018 in Cincinnati, Ohio. (Photo by Andy Lyons/Getty Images)</p>

CINCINNATI (AP) — First-year manager Mickey Callaway knew something was badly wrong when Wilmer Flores went to the plate for the first time. At that point, it was too late to change the Mets' mistake.

New York wasted a first-inning rally by batting out of turn, and Adam Duvall led off the 10th inning with a homer that sent the Cincinnati Reds to a 2-1 victory Wednesday, concluding a series that will be remembered for an unexpected traded and an embarrassing mistake.

This one simply wasn't in the lineup cards for New York.

"It is frustrating," said Callaway, who blamed himself for an administrative mistake. "It probably cost us a game. We had a chance to score in the first and we didn't."

The Reds took advantage. Duvall connected for the first game-ending homer of his career off A.J. Ramos (1-2), sending New York to its eighth loss in nine games. The Mets have scored two runs or less in seven of them, including three shutouts.

The Reds took two of three for only their second series win of the season. They're 10-27, their worst start since the Great Depression. Raisel Iglesias (1-0) retired six straight batters, fanning three.

It started with a miscommunication. The Mets handed Callaway's lineup card to the umpires, which had Asdrubal Cabrera batting second and Wilmer Flores third. However, the lineup sent out by computer pregame and posted on the dugout wall incorrectly had the two hitters switched in the order. Callaway did not identify who sent out the incorrect lineup.

Callaway knew there was nothing he could do when Flores batted out of turn and struck out for the second out. Cabrera then doubled to left, and the Reds pointed out the discrepancy. The double was nullified and an out was called , credited to Jay Bruce, the next batter.

"I felt bad," Reds interim manager Jim Riggleman said . "It's so easy to have that happen."

Crew chief Jerry Meals had never been involved with a batting-out-of-turn in the majors.

It was the first time a major league team was caught batting out of turn since the Brewers did it in 2016. The previous time the Mets batted out of order was 1977.

Following their correct order the next time through, the Mets got a run in the third when Brandon Nimmo tripled off Sal Romano and scored on Cabrera's groundout.

Zack Wheeler had retired 12 straight before the Reds rallied in the sixth to tie it on Joey Votto's single. Wheeler had to wait until the umpires sorted out the batting-out-of-order situation to throw his first pitch.

"I don't know," Wheeler said. "Some weird baseball. Unfortunately it happened, but it does happen every once in a while."

Catcher Devin Mesoraco started for the Mets and went 0 for 4, a day after the Reds dealt him to New York for pitcher Matt Harvey.

The Reds were on the other end of a batting snafu 10 years earlier at Shea Stadium. They batted out of turn in the ninth inning after a double switch during an 8-3 loss to the Mets on May 11, 2008.

The Reds had some fun with the Mets' misadventure on their Twitter feed. They retweeted the Mets' pregame post with their starting lineup and commented: "Can someone send this down to the third base dugout?"

The Mets have lost 16 of 23 following an 11-1 start, falling into fourth place in the NL East.

Infielder Luis Guillorme was called up from Triple-A Las Vegas and catcher Tomas Nido was optioned. The 23-year-old Guillorme will make his major league debut.

There's no set plan for when Harvey will pitch or whether he'll be used as a starter or reliever initially. He's in Los Angeles and will join the team for the start of a series Thursday against the Dodgers.

The Reds open a four-game series against the Dodgers, who have won their last eight games against Cincinnati and 17 of the last 20. RHP Tyler Mahle (2-4) faces RHP Walker Buehler (2-0).