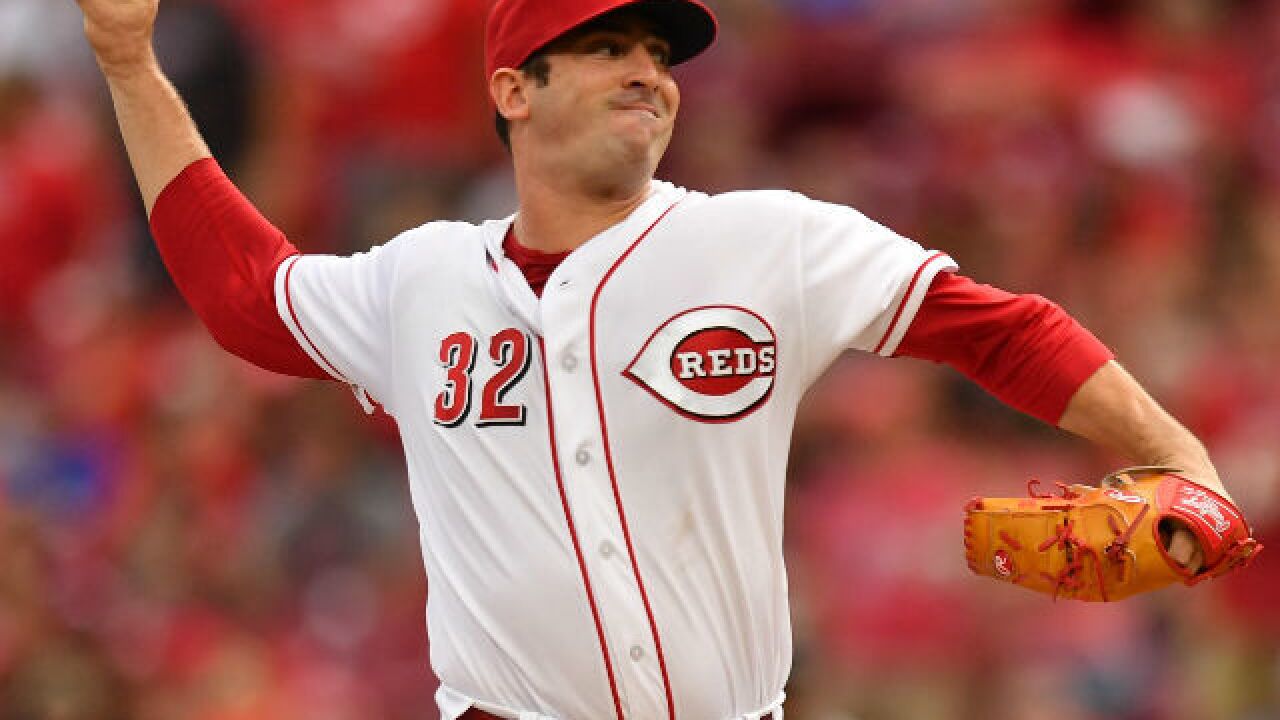 Image copyright 2018 Getty Images. All rights reserved. This material may not be published, broadcast, rewritten, or redistributed.
<p>CINCINNATI, OH - AUGUST 18: Matt Harvey #32 of the Cincinnati Reds pitches in the first inning against the San Francisco Giants at Great American Ball Park on August 18, 2018 in Cincinnati, Ohio. (Photo by Jamie Sabau/Getty Images)</p>

CINCINNATI (AP) — It was a throwback night for Matt Harvey. At least, that’s how it looked to Giants manager Bruce Bochy.

Harvey took a no-hitter into the sixth inning, Jose Peraza and Dilson Herrera backed him with home runs and the Reds dominated Madison Bumgarner and San Francisco 7-1 on Saturday night.

“He had good stuff,” Bochy said. “He really did throw well. He’s been throwing well, but he reminded me of when he was really throwing well. He was throwing 95. He mixed it up and hit his spots.”

The former Mets ace followed up a seven-inning, five-hit, two-run start the previous Saturday against Arizona.

“After a successful outing last time, it is big to have another,” Harvey said. “I’m getting there. Health is the biggest thing. It is hard to stay sharp when you’re used to going every sixth day. You feel a little out of whack. The guys are calling me the Saturday starter, like in college.”

Scooter Gennett had three hits for the second straight night and scored three runs, Peraza had two hits and scored twice and Brandon Dixon drove in two runs with a bases-loaded double. Cincinnati sent the Giants to their third straight loss after winning three in a row. San Francisco has lost nine of its last 14 games.

Harvey (6-7) didn’t give up a hit until there were two outs in the sixth, when Joe Panik beat out a grounder that shortstop Peraza backhanded deep in the hole.

Harvey threw 6 1/3 shutout innings, allowing four hits and a walk with five strikeouts. He drew a standing ovation as he walked to the dugout, and improved to 6-5 in 17 starts for the Reds since being acquired from the Mets for catcher Devin Mesoraco on May 8.

Bumgarner (4-5) turned in the worst of his 14 starts this season, setting season highs by allowing six runs and eight hits in six innings.

“I wouldn’t say today was the best that I’ve felt this year, but I felt pretty good,” Bumgarner said. “It’s a funny game. That’s how it works out sometimes. It was weird. I was making my pitches, and they were getting hits.”

Peraza led off a three-run fourth with a line shot into the left field seats. Dixon capped the inning with a broken-bat blooper down the right field line.

“That wasn’t my favorite part of the game,” Bumgarner said. “That’s the way it goes sometimes. Sometimes, they hit it right at guys.”

The Reds added two runs in the fifth on Phillip Ervin’s bases-loaded sacrifice fly. Peraza scored from third and Gennett came around on center fielder Stephen Duggar’s throwing error. Herrera led off the sixth with his third homer of the season.

The Giants scored their only run when the Reds couldn’t complete a double play on Evan Longoria’s bases-loaded grounder with one out in the eighth.

The Giants have scored three or fewer runs in 10 of the last 14 games and have hit just two home runs in their last 93 innings.

Harvey’s win was his first over San Francisco in five career starts. The Giants hit a combined .289 against him in his first four appearances.

Of Herrera’s six hits this season, three have been home runs.

Giants: LHP Andrew Suarez (4-8) allowed five runs in six innings of a 6-3 Reds win on May 16 in San Francisco.

Reds: After allowing one home run in five July starts, RHP Luis Castillo (6-10) has been roughed up for three in his two August outings.