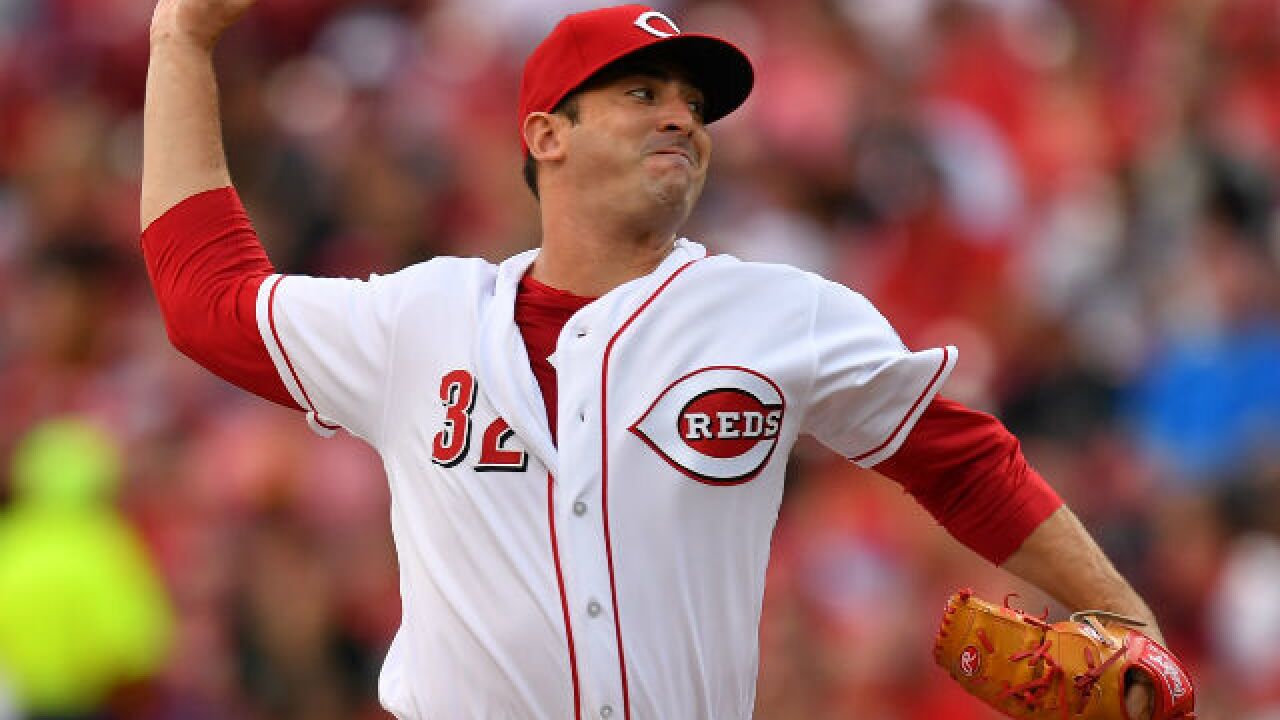 Image copyright 2018 Getty Images. All rights reserved. This material may not be published, broadcast, rewritten, or redistributed.
<p>CINCINNATI, OH - JULY 28: Matt Harvey #32 of the Cincinnati Reds pitches in the third inning against the Philadelphia Phillies at Great American Ball Park on July 28, 2018 in Cincinnati, Ohio. (Photo by Jamie Sabau/Getty Images)</p>

CINCINNATI — If Matt Harvey's trade value went down after his eight-run debacle against the Pirates last weekend, it should go back up now.

With the non-waiver trade deadline coming up Tuesday, baseball experts are saying that Harvey could be headed to the Brewers. Or the Mariners. Wherever he might go, the free-agent-to-be made himself more marketable in possibly his last Reds start Saturday night.

The former Mets ace allowed two runs and two hits in five innings in a 6-2 win over the Phillies, then repeated what he has been saying about trade rumors.

"I'm not talking about trades," Harvey said. "I'm here now and I enjoy being here."

Hunter retired the first nine Philies and didn't make a big mistake until the fourth inning, when Rhys Hoskins' crushed a two-run homer.

"It was really coming out of my hand better early on," he said. "When the velocity went down, I was able to execute pitches."

Harvey has a 3.82 ERA over his last seven starts, even with the shelling from the Pirates. Don't count that game and his ERA is 2.18 since June 21.

Hoskins'  third home run of the series and 21st of the season gave the Phillies a 2-1 lead. But the Reds hitters staged a comeback and the bullpen pitched four scoreless innings, allowing only two hits.

Wandy Peralta (2-2) got the win with 1 1/3 innings of relief in his first appearance since being recalled on Friday.

Sal Romano, a starter making his second relief appearance of the season, and Jared Hughes each got double-play balls to finish the seventh and eighth. Hughes pitched the ninth for a five-out save, his career-high seventh save. He had four in his career before this season.

"It was Romano's day to throw on the side anyway," interim manager Jim Riggleman said. "All the guys are chipping in."

Reds 3B Eugenio Suarez went 0-for-4 with a walk to see his streak of consecutive games with a home run snapped at five, tied with seven other players for the franchise record.

Jose Peraza's double to lead off the first inning extended his hitting streak against Philadelphia to nine straight games dating back to April 6 of last season. He is hitting .361 (13-for-36) against the Phillies during the streak.

SS Asdrubal Cabrera, acquired from the Mets in a Friday trade, went 0-for-4 in his Phillies debut.

Phillies: SS J.P. Crawford took another round of batting practice in Clearwater on Saturday. "It went very well," manager Gabe Kapler said. There is no timetable on Crawford's return from a broken left hand, Kapler said.

Reds: LHP Amir Garrett returned to start the eighth after facing one batter on Friday before leaving with what the team announced was a "mild left Achilles strain."

Reds: Luis Castillo, who led National League pitchers in home runs allowed for much of the season, has given up one homer in his last five starts.